What does your Heart Call upon you to do? ---SEYM Youth Banner

The new SEYM Field Secretary for Earthcare position, the needs of our Youth Program, and how to encourage more participation in SEYM were among the key issues taken up by Friends gathered for Fall Interim Business Meeting. About 40 Friends attended FIBM, held at the St. Petersburg Meetinghouse October 3rd.

The Youth Committee urgently needs Coordinators for the Gathering Youth Program for three age groups, as well as workshop leaders. The Youth Committee convenor, Vicki Mariner (Tallahassee) also reported that more committee members are needed, including a clerk, since several Friends listed on the Youth Committee roster are serving only in advisory roles. The FIBM Clerk appealed to Friends to take this concern to their Meetings. If you think you or someone you know might be willing to help in any way, please send the Nominating Committee and Youth Committee an e-mail.

Friends are excited about the new Field Secretary for Earthcare (FSE) position created at our 2015 Yearly Meeting. The Earthcare Committee presented a proposed job description, along with proposals for an Anchor Committee, Search Committee, and Advertisement for the position. The Executive Committee, in its meeting on Friday night, approved sending these draft documents out to Meetings for discernment, in preparation for final approval at Winter Interim Business Meeting. The plan is to have the Field Secretary for Earthcare position filled by Yearly Meeting 2016. Documents will be posted on this website soon. 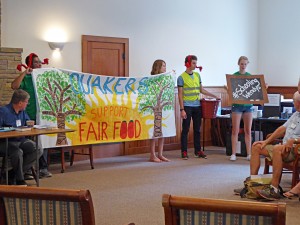 The high point of the day was the Fair Food Campaign action at a local Wendy’s, organized and led by SEYM Youth. Several adults joined the teens and Young Adult Quakers (YAQs) in this action, as part of a National Week of Action organized by the Student & Farmworker Alliance. See full story >

News of the US bombing of an MSF (Medecins Sans Frontieres/Doctors Without Borders) hospital in Afghanistan sent shock waves through committee meetings on Saturday morning. In our afternoon business meeting, Friends united in sending a letter— to President Obama, Secretary of Defense, Congresspeople, and newspapers— condemning the action, urging an immediate stop to all bombing, an investigation, and reparations to the victims. Read full story >

What does your Heart Call upon you to do? —SEYM Youth Banner

Other actions taken at FIBM include:

Friends minuted a heartfelt ‘Thank You!’ to St. Petersburg Meeting for hosting this FIBM, opening their meetinghouse and meeting rooms, and providing a wonderful lunch and refreshments as well!

The Minutes of FIBM will be posted on our Business & Finance Page soon.