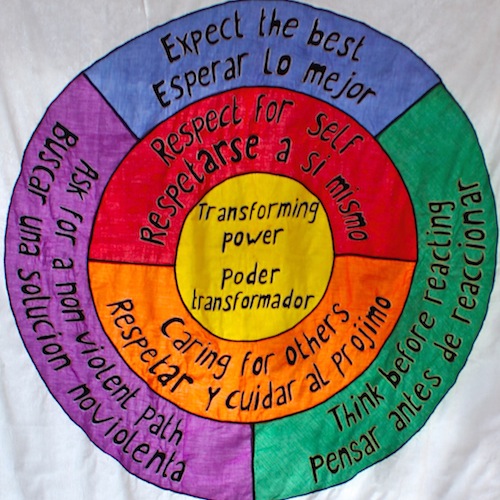 Cece Yocum (Tampa), currently serving as clerk of Peacebuilding En Las Americas and our SEYM Representative on Friends Peace Teams, sends us news that the Colombian Peace Accords are opening many new needs and opportunities for their peace-building and reconciliation work. 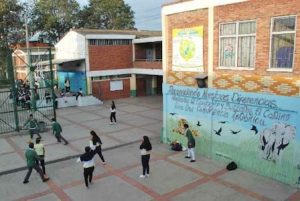 Since January 2016, AVP facilitators have done 12 mini-workshops in Ciudad Bolivar’s schools to work with students, teachers, administrators, and staff

While the signing of the Peace Accords ends the armed conflict in Colombia, a tremendous amount of effort is needed to address the underlying social conflicts, as well as the trauma that 52 years of war has left behind. Change and peace-building is needed at institutional, community, and individual levels. Ex-combatants need to be reintegrated into society, reparations made to victims, and trust built between polarized social groups.

Now, more than ever, doors are opening for Peacebuilding En Las Americas (PLA), a working group of Friends Peace Teams (FPT) to expand its work in Colombia. PLA works in war-torn regions of Central & South America, offering Alternatives to Violence Project (AVP) workshops and community-based trauma healing. The trauma healing workshops have been adapted from the Healing and Rebuilding our Communities (HROC) program in the great lakes region of Africa to fit the needs of programs in Latin America. 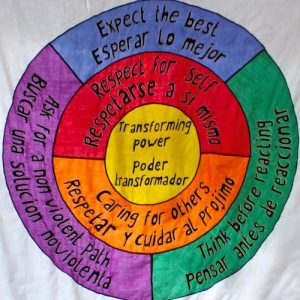 “…the peace agreement is a starting point…It is the beginning of a profound and comprehensive work for peace and nonviolence, which generates the need to plant peace, to let people know about strategies and alternatives in the media and educational institutions.

“Many AVP Facilitators believe that now is the time to broaden the scope of AVP workshops, believing that their focus on building communities and trauma healing will help bridge polarized groups as well as spread dignity and self-respect.

“This is the best time to make AVP more visible in the country.”

But spreading AVP will require getting the word out to increase awareness, more workshops and new facilitators—all of which require more funding.

An AVP workshop where two participants from opposing sides of the conflict came together.

“I appreciate all the support SEYM has given to Friends Peace Teams. I am excited to hear there is progress in Colombia,” says Cece Yocum, who has been to Colombia three times with the trauma resiliency program she and others developed for PLA. In several workshops there have been ex combatants and ex child soldiers.

Bev Ward, also of Tampa MM, accompanied her on one trip to facilitate a trauma program for families of the “false positives.” At that time it was believed that several hundred young men had been killed and later learned that there were over 3000 killed. This is one example of the kind of work that is needed.

“This is not only the best time to expand AVP in Colombia, but also the best time for us to donate and support this important work!” 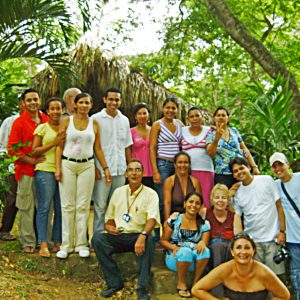 Cece Yocum with a workshop group