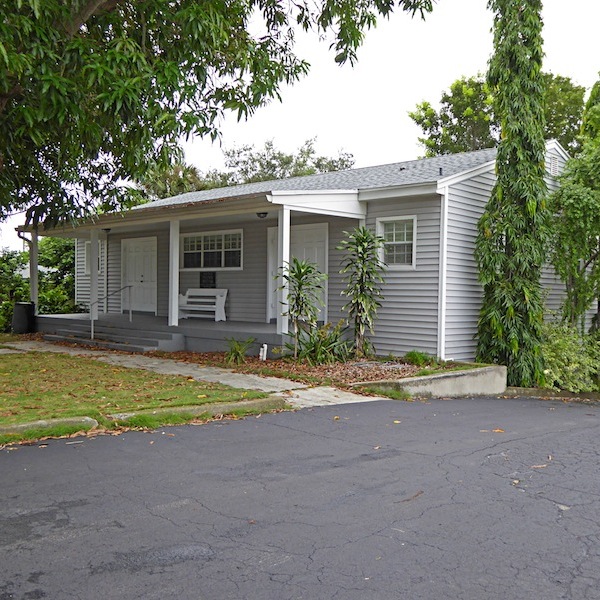 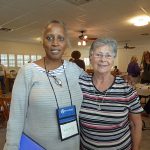 The exciting news is that Beverly Ward, of Tampa Meeting, has been hired as our SEYM Field Secretary for Earthcare! Beverly has a long experience with Friends and a strong commitment to environmental concerns. Her background also includes several academic degrees, leading AVP workshops, and addressing issues faced by vulnerable communities. Her hiring is the culmination of months of work by the Search Committee, who had placed ads in Quaker publications and websites and had networked with Quaker organizations in their search for qualified candidates. The Search Committee writes:

” What struck us was the way Beverly has woven her education and experiences in such a way that has opened a unique background and ability to create space for dialogue, activism, and negotiate in conflict management.”

Tampa Friends announced that they will have an open house on October 30th to celebrate completion of their new worship building. 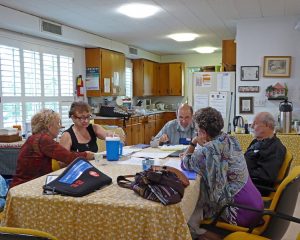 The Peace & Social Concerns Committee reported that they are planning a full day retreat for the Friday, January 13 (the day before Winter Interim Business Meeting), based on the book A Sustainable Life: Quaker Faith and Practice in the Renewal of Creation by Douglas Gwyn. On the concern for Gun Violence, they recommend forwarding Orlando Meeting’s minutes to Meetings for discernment. Friends who would like to start a Death Penalty Working Group are asked to contact Warren Hoskins. A Quaker House representative will lead a workshop on conscientious objection at the Gathering.

The Gathering Committee reports that the Walton Lecturer, Peter Toscano, wants to connect with Monthly Meetings in the weeks before the Gathering, on the theme of “Climate Justice.” There are 24 proposed workshops and interest groups for the 2017 Gathering, including the Worship & Ministry Committee’s intensive workshop, led by Eduardo Diaz, “Invoking the Presence of God.”

The Worship & Ministry Committee clerk, Clara Diaz (Miami), announced that the 2018 Michener Lecturer will be Wess Daniels, who will speak on “Convergent Friends.” She also reports that the committee is available to help Meetings address the quality of their worship.

The Youth Committee has a new clerk and new energy. They have exciting and fun ideas for the Gathering Youth Program, focusing on the Gathering theme of Climate Justice.

FIBM united with Miami Meeting’s minute of support for Standing Rock, brought forward by the Earthcare Committee. The SEYM minute will be sent to the Standing Rock tribe’s publicist, FCNL, Creation Justice Ministries, and our representatives in Congress. Kathy Hersh reported that her son, Kody Hersh, had been to the Standing Rock encampment, and that the drilling continues.

The Ministry on Racism Committee brought forward a request that meetings and yearly meetings affirm the need for restoration of rights for persons formerly in prison and the need for removal of the exception clause of the 13th amendment. FIBM approved sending out their appeal, entitled “End Slavery for All.”

ProNica Board members Brad Stocker and Josh Paolino reported that Melissa Ajabshir, Stateside Coordinator, will be leaving that position October 7; Irene King will be taking her place. Peter Schmidt, of Tampa Meeting, will serve as the volunteer bookkeeper. They ask Friends to consider donating more to ProNica, as inflation and bureaucracy are having a negative impact on funds. Also, the presence of the Zika virus had caused cancellation of two delegations, which are a source of income. They shared their concerns for the political stability of Nicaragua. 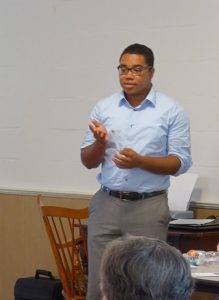 Aurelio Anderson reporting on his experiences in FCNL Advocacy Corps

Aurelio Anderson reported on his work as a member of the FCNL Advocacy Corps, a group of 18 young adults from all over the country who organize in their communities and lobby national legislators. Advocacy Corps members are employed for one year, after undergoing an intensive training in the summer. He is available to visit Meetings to talk about lobbying. Friends can contact him via e-mail:  Aurelio Anderson

Warren Hoskins, SEYM representative to the Quaker United Nations Office (QUNO), encourages Meetings to sign on to the Quaker Statement on Climate Change.

The SEYM Operational Handbook is in the process of being updated. Phoebe Andersen (Tallahassee) is serving as editor, with input from committees, officers, and representatives.