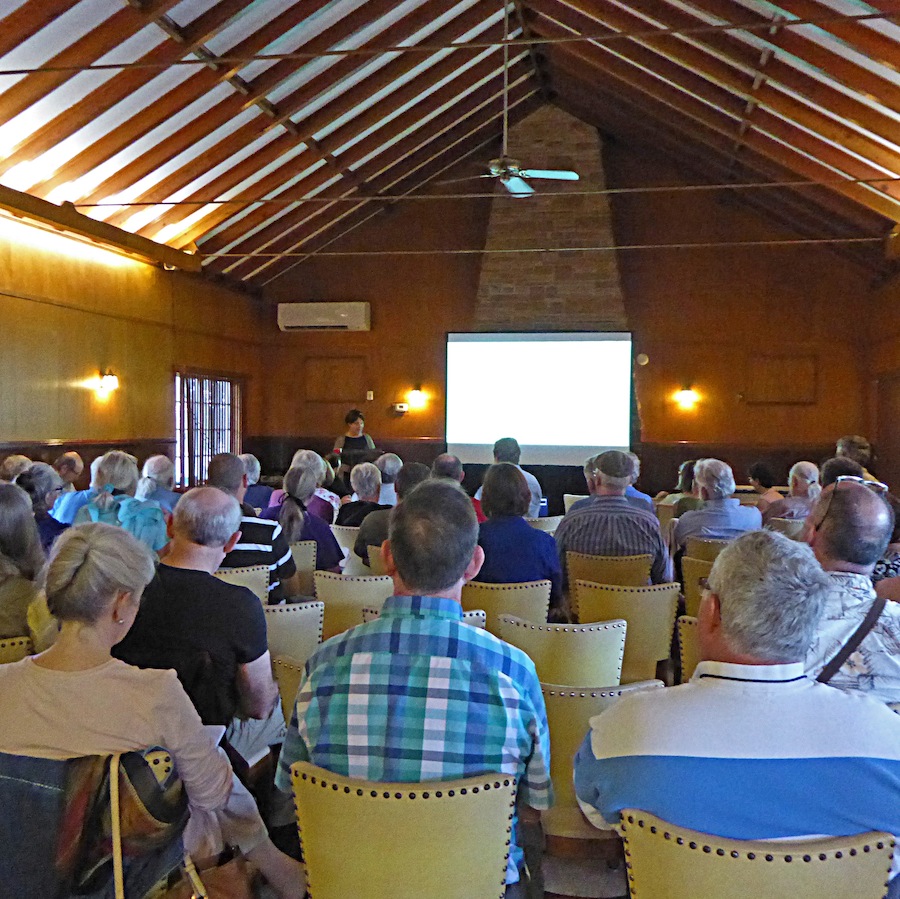 Friends gathered for a busy and exciting weekend at the Orlando Meetinghouse, January 13th through 15th, 2017. 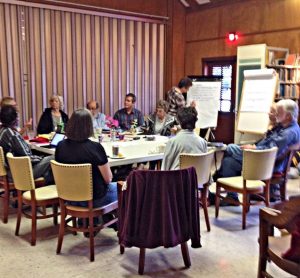 On Friday, January 13th, the Peace & Social Concerns Committee held a retreat based on A Sustainable Life by Doug Gwyn. 16 Friends from 6 meetings and worship groups spent the morning sharing and reflecting on how working for peace and justice can be done sustainably, in ways that reflect our Quaker values. Cece Yocum (Tampa) writes:

“We want to renew our interest in the practice of nonviolent direct action based also in Quaker values. We also agreed with the author that peace building is like house keeping— there is always more to do, and things that we thought were “cleaned up” will need further work. We want to acknowledge those Quakers who often are following individual leadings that contribute to social justice and support them in our individual meetings and worship groups. We want to be aware of our ‘sense of place’ and what is happening where we live. To sustain us, we acknowledged our gifts, successes and practices that keep us grounded in the spirit that guides us.

“We also reflected on the work of the youth committee with their work on mountain top removal and Immokalee workers and bringing the yearly meeting together to focus on these issues. We liked the model of immersion visits and developing a campaign that brought together many aspects of our witness.” 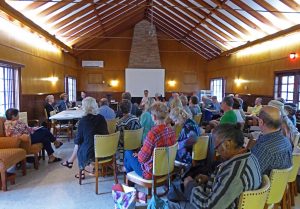 The Executive Committee met on Friday night, with 22 Friends in attendance. The minutes are posted here>.

About 60 Friends were in attendance at Winter Interim Business Meeting (WIBM), which began Saturday morning with a half-hour of worship and roll call of Meetings and Worship Groups, after which Friends broke out into Committee meetings. Business meeting resumed after a wonderful lunch provided by Orlando Friends.

Here are a few highlights:

A minute regarding the Sabal Trail pipeline, brought forward by the Earthcare committee was approved:

17WIBM01.   The Sabal Trail Pipeline and Florida South Connection, which are being built by Florida Power and Light, Next Era, and Duke & Spectra Energy, endanger culturally significant land and also put several Florida waterways, human populations and wildlife in danger. We, Southeastern Yearly Meeting of the Religious Society of Friends (Quakers), meeting at WIBM, are called to support the voices and peaceful actions of those who are protesting this pipeline.

Beverly Ward, Field Secretary for Earthcare (FSE), gave a brief update on her activities from Twelfth Month to WIBM, including the first visit to a Monthly Meeting (Miami), and a talk with the Unitarian-Universalists of Clearwater. She participated in the SEYM Peace and Social Concerns retreat and visited with the Committee on Racism during WIBM. She has several other visits planned before YM Gathering including Gainesville, Orlando, and Sarasota Monthly Meetings. Friends may request visits by e-mailing Beverly, or by contacting the SEYM Office  or any member of the FSE Anchor Committee. Friends can read Beverly’s detailed FSE report to WIBM or visit her blog/muse on the Field Secretary for Earthcare page.

The Nominating Committee brought forward Bill Carlie’s (Orlando) name to serve as Yearly Meeting Clerk, beginning at rise of Yearly Business Meeting 2017. The Executive Committee reported on how Bill, as YM Clerk, and Vicki Carlie, as SEYM Secretary, would avoid conflicts of interest in fulfilling their respective roles.

Clara Diaz (Miami), Worship & Ministry Clerk, announced that Wes Daniels will be our 2018 Michener Lecturer, speaking on the topic of Convergent Friends. The Worship & Ministry Committee recommends that Meetings and Worship Groups establish Spiritual Formation groups, and/or participate in the FGC Spiritual Deepening program, which is now online. Three Meetings (Tampa, Ft. Myers, & Orlando)  have Spiritual Formation Groups, and Savannah Meeting has done the Spiritual Deepening program. The committee also addressed Friends’ concerns for the problem of political messages in meetings for worship. The Committee recommends that when this occurs, a member of the meeting’s Worship & Ministry Committee could stand, and say “the meeting needs to go back into Meeting for Worship.”

Peace & Social Concerns  co-clerk Elaine Martin (Jacksonville) reported that the committee is looking at how to support the many individual Friends throughout SEYM who are doing hard work for peace and social justice. They plan to start a skill and interests directory to better connect and support Friends and meetings, and are also looking for resources on nonviolent direct action training for Quakers. The committee reported that nine Meetings have joined the Coalition to Prevent Gun Violence (read more>). Elaine also reported on the upcoming AVP workshop in Jacksonville, March 3-5. 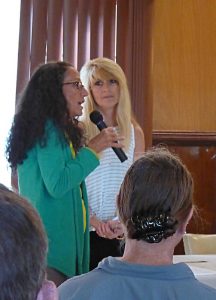 Pam Haigh (St. Petersburg) gave the ProNica report, introducing the new Stateside Coordinator, Yarrow Ries (St. Petersburg). ProNica is going back to having volunteers — mostly the core local group in St. Petersburg — do more of the work. Pam explained how difficult it has become to operate as an NGO in Nicaragua. She also shared more about the lack of funding impacting Los Quinchos since their main donor and fundraiser died. ProNica has several delegation tours coming up. Also, a Friends Witness Tour is taking shape as more Friends express their interest. Contact ProNica to learn more.

Susan Taylor (Tallahassee) reported for Ministry on Racism committee. They plan to send out a revised statement about removing the ‘exception clause’ of the 13th Amendment to Monthly Meetings for comments. Susan also reported on FGC’s upcoming institutional assessment to remove structural racism, which needs funding support.

Reports were also heard from our Representatives, including:

Friends Committee on National Legislation (FCNL): Karen Putney (Tampa) urges Friends to visit the new FCNL website, which is a valuable resource for Friends concerns. She emphasized how FCNL needs us to back them up by making phone calls to our members of Congress—constituent phone calls carry a lot of weight.

Friends World Committee for Consultation: Eduardo Diaz (Miami( reported that FWCC has a new website. He also reports that Meetings can request a visit from a member of FWCC’s Traveling Ministry Corps for Section of the Americas.

Friends for Lesbian, Gay, Bisexual, Transgender, & Queer Concerns (FLGBTQC): Stephanie Preston (Orlando) reports she attended the summer FLGBTQC gathering, and that they are having a year with no business so they can reflect on the purpose of their community.

Friends Peace Teams (FPT): Cece Yocum (Tampa) reports that FPT needs to raise $20K to finance various projects. Cece is the clerk of Peacebuilding en las Americas (PLA), an initiative of FPT for Central and South America, and reported on their AVP work in Columbia. Friends can donate to PLA by donating online at the FPT website, earmarking for PLA. Caroline Lanker (Lake Wales), who does the FPT newsletter, also reported. Eduardo Diaz noted that Cece was just elected to serve as a member of APA’s Council of Representatives. She is representing the members of the Peace Psychology Division, aka the Society for the Psychological Study of Peace, Conflict and Violence.

Quaker Earthcare Witness (QEW): Jack Bradin reported that QEW met at Pendle Hill, and their new clerk gave each YM the book Overdevelopment, Overpopulation, Overshoot, which Jack shared with us. 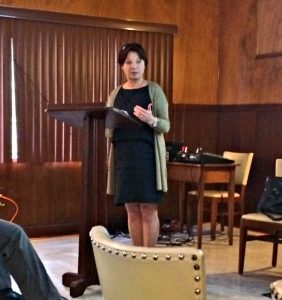 Susan Waltz presented the Michener Lecture, “From My Measure of the Light.” She spoke about the experiences and questions that shaped her work in human rights. Stories about her personal friendships with people in countries in North Africa illustrated how personal connections and human experiences create community. She explored our spiritual obligation to care for one another and the stranger, and spoke about the plight of refugees and immigrants. Susan also gave us the background history of the UN Declaration on Human Rights, and the Quaker contributions to it.

About 75 Friends attended the lecture, with many staying for the seminars. Friends commented on the timeliness of the lecture, given that our concern for immigrants and inclusiveness now has a greater sense of urgency. We felt deeply thankful for Susan Waltz’ presence and message.

Click on any thumbnail to see the full size picture and slideshow.