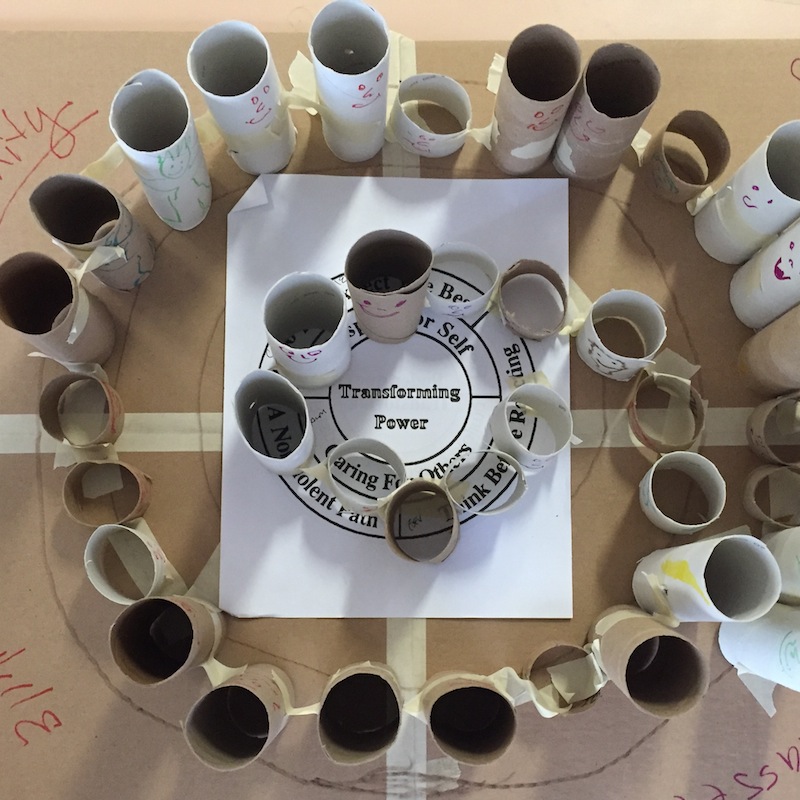 Following a Basic Alternatives to Violence Project Workshop in Jacksonville, Tenth Month 2016, Tim Fogarty (Gainesville Meeting) wanted to find a time at Half Yearly Meeting (HYM) to do a talk about AVP. We did not find time at HYM, but we gathered up reflections by some of the participants in the Basic AVP Workshop.

These reflections, shared below, go beyond that workshop to discuss how AVP, Healing for Trauma, and related workshops may be a resource during “trying times.” Contributors have used their AVP ‘Adjective Names’ — choosing positive words that begin with the same letter as their first names to describe themselves.

As a person who has worked with Quakers in Nicaragua for more than 30 years and as a practicing Quaker for the last 15 years, I became aware of AVP’s rapid spread among those for whom peace and nonviolence are high priorities. As a person working with cross-cultural and international efforts to build solidarity, especially in light of the recent U.S. campaign season, which was so immersed in aggressive and conflict-laden rhetoric, I have become deeply concerned for our country. 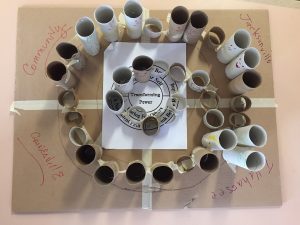 So, I was very excited to finally register for a basic AVP training weekend this October in Jacksonville. There I learned that AVP is non-denominational, even though started with help from Quakers in a prison in upstate New York. It is also used by Quakers (Friends) and Christian Peace Teams in their work worldwide.

Since 1975, AVP has been teaching skills of interpersonal affirmation, communication, and conflict resolution.   Its impact has been especially apparent in the prison system and most of the trainers in Florida seem to have some prison ministry to begin and then support AVP in state prisons.   As Quakers have been involved in prisons in this country since the very beginning and since Quaker values of integrity and peace can be readily strengthen by using AVP skills, there are natural affinities.

The dozen of us from throughout the state of Florida (both experienced AVPers and neophytes) who met in Jacksonville coalesced into a close-knit group of peacemakers by engaging in a very interactive style of interpersonal and group discussions and activities. There were opportunities to learn from and enjoy each other regardless of one’s preferred style of learning or socializing. The collegial learning design (another affinity with Quaker process) encouraged me, even though I was new to AVP, to be responsible for my own progress as a trainee, and for the ability of the group to form community.

I was excited to learn that there are two more levels of training that I may eventually be able to engage in, as I know they will help me become a better peacemaker, a better communicator, and hence a better Quaker.

What I was extremely excited about was meeting some of the most experienced leaders of AVP available anywhere and to hear them say they would be willing to assist in getting a basic training in Gainesville, if we could recruit participants and arrange for the local logistics. So Shawna and I spent the ride home talking about next steps. With the assistance of Gainesville and AVP friends we have scheduled a basic AVP training for the weekend of March 3rd – 5th 2017.   Rescheduled for Jacksonville. Gainesville workshop to follow. Stay tuned!)   We are really looking forward to recruiting participants from Quaker meetings in SEYM as well as locals from Gainesville.   If you come from out of town we will provide hospitality.   The weekend will be a lot of fun. Bring a friend, as we will need close support in the days ahead regardless of where we plan to use these skills.

Over 40 years since AVP began at Greenhaven prison in New York, AVP is now in over 35 states across the country and 48 countries around the world. AVP is used not only in prison settings, but also in schools, communities, refugee camps, women’s shelters and many other venues. In 1995 Steve Angel was invited to travel to Miami to train community groups (mainly Quakers) in AVP. I have been bringing AVP into Florida prisons since 1997.

Over the past 20 years of AVP in Florida, thousands have been trained, both in and out of prisons. I am still in contact with over 100 AVP inmate facilitators who have been transferred to facilities across Florida and have no programs at their current institutions. I am hoping we can get more interest going around Gainesville so we can go into Lowell Annex. (Lowell Correctional Institution is a women’s prison located in Marion County, Florida, north of Ocala.) The women there are very anxious to get AVP offered. There is much need since it is a particularly violent facility. With such a high volume of incarcerated in Florida the need for AVP inside the walls is huge.

We are also trying at the national level, to encourage more youth involvement. New Jersey holds a “youth camp” each summer to train young AVP facilitators.

In Jacksonville, we also discussed working with veterans groups since AVP is a powerful healing tool for those returning home to our communities.

We need to transform to create a culture of healing and support. We need to spread joy, not fear and hate.

Composting Christina and Nascent Ned were two of the organizers of the first Jacksonville Workshops that began more than two years ago. Christina describes herself as “a Quaker in spirit.”

AVP Tampa Bay has been going since 2000. Most of our energy and focus is currently at the minimum-security women’s camp at Coleman Federal Complex, the largest federal correctional facility in the U.S. We have been at Coleman nearly every month since 2002. Given all the conflicting attitudes regarding sentencing laws, prison conditions, re-entry challenges of felons, AVP is very helpful. Not only does it support the individual prisoner, but it also builds community in a challenging setting. The women talk about how beneficial it is with family as well. And while it can be daunting to work with staff, AVP has been known to rub off in remarkable ways. The women often say that if they can make their time inside work with AVP experience, they will be better prepared for what life throws their way.

“I can’t believe that simple exercise (Paper Tiger) taught me so much about myself. I can see that I want to take charge with my family where I don’t need to.” (One participant after her first Basic Workshop.)

“Last night, I spoke to my mother, and for the first time, we actually had a conversation instead of arguing. Those ‘I messages’ really can work.” (An Advanced workshop participant on “Distant Relationships with Family and Friends.”)

“That AVP stuff must work, because when that woman first got here, she had only bad attitude.” (Another AVP workshop participant.)

The Help Increase the Peace Project (HIPP) is a version of the AVP workshop geared towards youth. I became trained in the 1990s soon after becoming certified in AVP. HIPP is much faster paced with more Light and Lively activities called HIPP Lifts. The discussion themes and prompts are geared toward the problems faced by young people. I recently led a team of two recently trained AVP facilitators in presenting HIPP workshops at the St. John’s Academy, a detention facility for high school aged boys who are sentenced from 6 months to a year. (This included Vincent Cobb, Tampa Monthly Meeting.) We were given a “highly volatile” group (pod) to work with. I think they were putting us to the test. After the first workshop, the pod went from an average of seven (7) incidents a day to only one (1) a day. The group was eager to take the second level workshop in which we focused on racism and violent conditioning. We chose six boys who showed leadership traits and maturity to take the Training for Facilitators. They graduated in November and will be spreading what they’ve learned to other pods, calling themselves the Peace Pod. The Academy administration is in awe of the changes in these young men. Our team bonded with the boys and we’re so proud of what they accomplished.

Cece as been a stalwart of AVP Tampa Bay and adds the beyond with her work in Friends Peace Teams Healing for Trauma in Africa and Peacebuilding en las Américas (PLA). Cece also has written about moral injury, Help for Moral Injury: Strategies and Interventions. Cece was another key organizer in the Jacksonville workshops.

I have been around AVP for a number of years, but began my training under the tutelage of Darrell and Susan Hefte, the anchors of AVP Tampa Bay, in 2003. I am called to do AVP workshops at times in my life when I most need this centering. “Practice, baby, practice.” As is my usual, I do things out of synch. I ended up working with Creative Cecilia in Colombia as a member of a Friends Peace Team before I was certified as a facilitator! I have found my niche as the archivist for Tampa Bay AVP team (I’m a repressed librarian, LOL!) I’ve been to Coleman. Each time that I participate in a workshop, unfortunately for the participants, I believe I gain more than I give. The practice of AVP is a way of living.