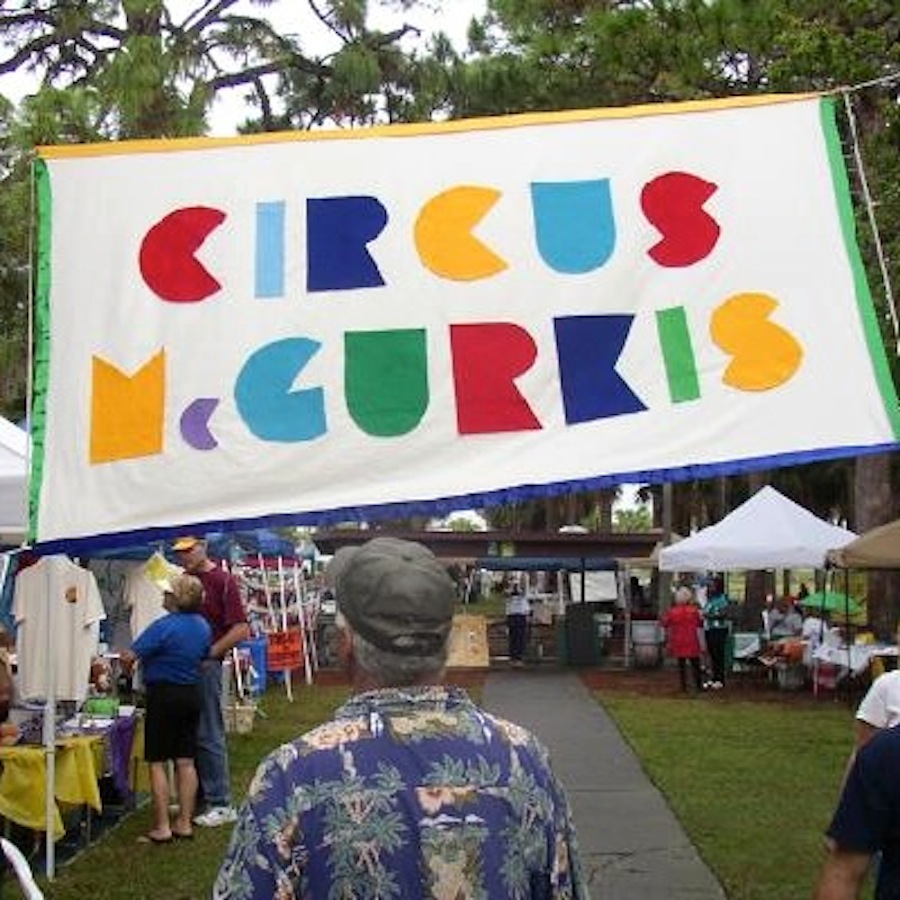 Circus McGurkis, “the People’s Fair,” was reinvented and reborn for 2017, becoming a deliberately smaller, simpler, community-centered event. Its theme was Circus McGurkis: The Next Generation. Organized by St. Petersburg Friends since 1971, this year’s fair was held on Nov. 11th at a new location, the Lakewood United Church of Christ, who partnered with the Meeting to host the event. A diverse crowd of about 3000 visitors attended this celebration of peace education, diversity, and community activism. It focused on children and families of all ages and types– enjoying music, activities, food, and about 90 booths of local vendors and non-profit community organizations.

Friends felt the 2017 Circus was a great success. Lynn Carol Henderson, St. Petersburg Meeting clerk and coordinator of the event, described it as a re-creation of the original vision and spirit of Circus McGurkis—truly a joyous sharing of our desire for peace, creativity and making the world a better place.

“It felt like a gathered meeting…..there was an infectious joy, a contagious beauty.”

All the vendors, non-profits, and performers were there because they wanted to be; they cared about the community, united with the vision of Circus, and worked together happily and peacefully. 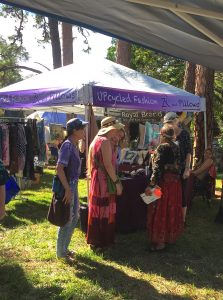 Vendors and non-profit organizations were about equal in number this year, and represented a diverse cross-section of the grassroots community of goods, social services and activism in the St. Petersburg area. Each vendor paired with a non-profit organization, set up next to and donated 20% of their profits to that organization —instead of being charged for their booth space as in years past. This partnering of artisans and commerce with social and environmental causes fostered new friendships and put money directly back into the community.

Vendors were asked to sell only items that were handmade, fair trade, sustainable, or locally made. They showed up with a wide range of goods, artisanal crafts, and creativity. The scent of vegan soul food, empanadas, Cajun shrimp and bar-b-que wafted over a crowd perusing upcycled fashion, pet-friendly treats, candles, honey, artwork and eco-friendly products of every description. The catchphrase of the day was “Do well by doing good.” 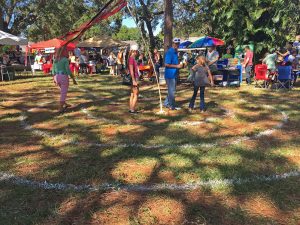 Children’s games and crafts, the labyrinth laid out at the heart of the Circus by Friend Gary Crosby and the drawing circle with models and organizers from Gibbs High School’s art students were key features in this year’s determination to focus on the young and the young-at-heart. Each organization was asked to provide multigenerational activities in addition to free literature and selling products that met the same guidelines as the craft vendors. Everyone complied and most went out of their way to express their gratitude for the chance to experience and help generate the Circus’s restorative atmosphere. Over and over they remarked how much they had missed Circus’s laid-back sense of well-being and harmony which they lamented is almost absent from today’s public life. 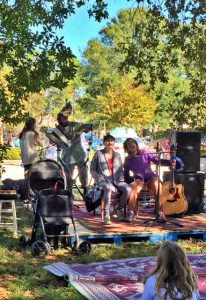 Performers set the tone, with music and songs expressing a positive voice for peace and working for a new world. One of the highlights of the day, FIREE, Florida Indigenous Rights and Environmental Equality started the fair with their Pow-Wow Drum and Native American blessing. FIREE also brought their solar–powered sound system which they offered to the other performers–not too loud …and not too soft…just enough to hear Whistling Tom and Cecelia Smith’s singer /drummer duo permeating the air with allegro energy. Then Hip Expressions, Circus’s faithful belly dancers, brought Tribal Zoo- a troupe of tribal dancers who invited us to join them in their realm of floating scarves and ankle bells. All day long, people were humming along with the beautiful soprano love songs of singer/songwriter Elaine Silver and the mellow tones of Caribbean keyboard and vocalist, Abintra. Lynn Carol’s storytelling and drum circle gathered an enthusiastic crowd as did a modern expressionist dance dramatizing the Bridges Across Borders work with Mexican immigrants. And to top it off, the Flip Flop Blues Band mingled honky-tonk and rhythm and blues from both the main stage and their paired set up with the Progressive Beat Poets of the Refuge Homeless Youth Center. Together they all provided the perfect atmosphere for many weighty and thoughtful conversations taking place in unexpected ways.

The Circus McGurkis booth was at the center of the fair in a bright red tent. It was simultaneously a clearing house for volunteers setting up and taking down, an information and problem solving hub and a thriving business in donated vegetable plants and trees, this year’s t-shirts, odd-sized unsold vintage T’s from the last few years, and a keg of Mother Kombucha mushroom laced fruit juice donated by Friend Josh Rumshlag’s brewery. 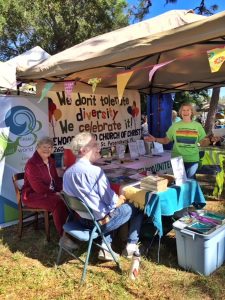 Everyone donated something, from the logo to free mailings from a generous event coordinator. The Lakewood United Church of Christ was heroic. Their members took care of preparing the site, providing free meeting space, grounds and storage and then on the day of the Circus the onerous task of directing the parking. They also set up and serviced an all-day refreshment room stocked with cold brew coffee donated by Story Brooke from her Craft Café.

The Circus finances were simple. Our main expenses were printing, buttons and bumper stickers and port-a-Potties. We spent all the money the St. Petersburg Meeting had put aside from the last Circus and planned to break even through donations. Because we were trying to keep our expenses low , thus minimizing our fund-raising efforts and eliminating the need for financial sponsorships, we only charged a fee to a specially invited group of 9 food vendors selected for their diverse ethnic, exotic and healthy offerings. Even the musicians, normally well-paid professionals, donated their performances, rewarded only with the crowd’s adulation, free t-shirts and a booth to sell their wares.

By the end of the day, our donation box was overflowing. We more than paid our bills and even returned enough money for next year to the St. Petersburg Meeting’s Designated Circus McGurkis Fund. Not only did our 4 paired vendors donate their 20%, Almost all of the other non-profits and vendors contributed money as they thanked us for providing an opportunity to participate and encouraged us to continue Circus in its new/old form in future.

Circus McGurkis is not only a Quaker service to community building, but also a marvelous opportunity to reach our neighbors on the many issues related to non-violence. Although this year the Circus was run by a majority of non-Quakers, the Quaker presence coordinating and participating on the Steering Committee and our volunteers at the Saturday Morning Market and other tables was vital to the fair’s success. At the fair itself, Quakers were also well represented. St. Petersburg and Tampa Meetings, ProNica Artisan products and Pam Haigh’s Nicaraguan Beauty School Worship Shearing all had booths. St. Petersburg Friends handed out flyers on St. Petersburg Meeting, Quaker principles and non-violence related issues, FCNL and AFSC. Friends gave away Friends Journals , sold peace-oriented calendars, buttons and bumper stickers, provided peace signs for children to decorate and created a calm and colorful center in a sea of consciousness raising stimulation. 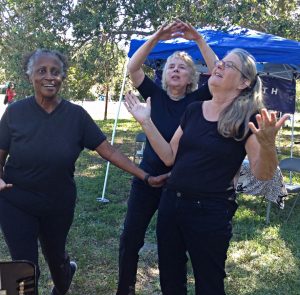 The Tampa Meeting booth provided crafts for kids and families including portable sidewalk chalk art and “AIR BNB motels for bees” made with recycled bamboo and rope. Tampa Friends also sponsored activities for kids—hula hooping, parachute games and the big yellow thingy— which were a big hit.

Tampa Friends Cece Yocum and Beverly Ward, joined by another member of their “Living Mirror Playback Theatre” troupe, created a “strolling” performance for about an hour, walking around and playing back stories from people in the crowd or at the tables. The theme of the performance was, “Tell me about your Circus McGurkis Experience: First time? Comparison? Today?”

For lots of people Circus McGurkis is an annual reunion, a family tradition. Although many had not been for quite a while, some had come first as children with their parents and now were bringing their own children. They wanted to know why we had moved from our location of the last 8 years, why the fair was so much smaller and why we didn’t have one last year. We told them that the Circus McGurkis rebirth in 2017 was about rejecting commercialism to return to the original vision: peace education, community building, creativity and intergenerational fun. Its re-invention entailed moving to a private venue, reducing the number of commercial and food vendors, moving the date from Halloween weekend to mid-November, and using a more organic approach to organizing.

The Circus had been laid down for 2016, when the Meeting realized it did not have the people-power needed to organize what had, over the years, grown to be a large, complex, and exasperating project; nor did they want to give over sponsorship to other groups. In preceding years, Circus had been held at a city park, which meant that the Meeting had to meet the City of St. Petersburg’s increasing requirements for things like insurance, security, and parking, along with other expenses. The last straw for Friends was the requirement that armed police be present to park and maintain security in the crowd. There was no unity to continue for 2016; Friends tried several ad hoc committees then set it aside to wait for new Light.

Waiting for clearness worked! After almost a year and a half, Lynn Carol felt the way open. As a last attempt to find allies, she called a friend of a Friend, Kim Wells, the pastor of the Lakewood United Church of Christ who’s oak studded campus was just a mile down the road from the former park site. shaded by two huge live oak trees!, When Pastor Wells enthusiastically embraced a 2017 Circus and offered to host the event on the church grounds, Lynn Carol felt led to ask for the support of the Meeting to form a Steering Committee made up of representatives from organizations serving sectors of local activism in the St. Petersburg Community- political, social, environmental and health care service related work. Two Friends agreed to serve in an advisory capacity with Lynn Carol and several agreed to be on the Steering Committee. Soon a bevy of volunteers both inside and outside of Meeting worked at every job. In a little over 2 months with a lot of help and a lot of effort, Circus McGurkis grew wings and flew!

Circus McGurkis 2017, The Next Generation met its many expectations with (literally) flying colors. The Steering Committee set out to reclaim with the young people of today the vision and optimism of the people who first dreamed Circus into being. It even had a park-like setting shaded by huge live oak and pine trees reminiscent of the 1970’s park where Circus was born!

“I have painted the signs, made the banners and told stories at every Circus since 1973. Each has been wonderful in its own way starting with Gillian Butler’s and Christine O’Brien’s Anti –Vietnam War/Anti-Nuke creation to the arts and crafts extravaganza of 2015. Even struggling to manage the ever larger affairs of recent years with their hundreds of arts and crafts vendors, the core of Circus was kept alive. Those who came felt it at the children’s art tent, the labyrinth and all the other Quaker spaces. This year the original spirit of Circus McGurkis once again took center stage —a spirit of reunion and joy in building community relationships and peace, and of engaging in lively, creative activism. The People’s Fair has truly been reborn.”

“It was like we were remembering who we want to be and being it!”