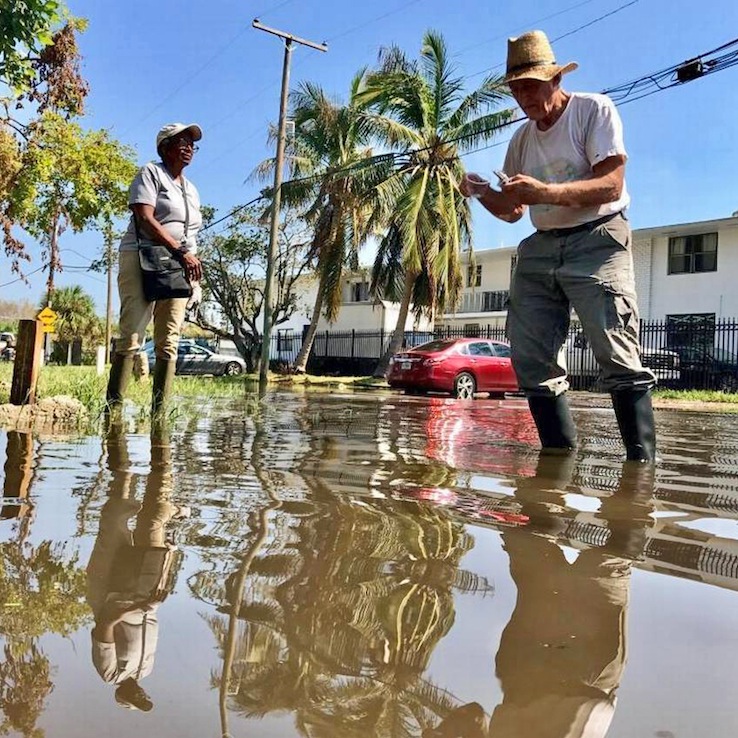 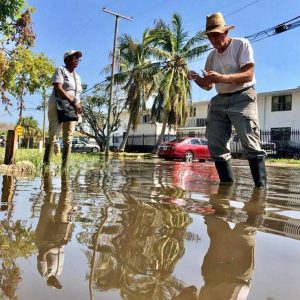 Many communities in South Florida experience “sunny day” flooding during periods of very high or “king tides.” During a new or full moon, when the sun and the moon are aligned with Earth in their orbits, the gravitational pull on the oceans is at its strongest, producing what are called “king tides.” Three or four times a year, when the moon is at its perigee, these tides may cause coastal flooding, even during daylight hours. During Ninth Month this year, John Heimburg and I joined representatives of the National Library of Medicine-National Institutes of Health, the Unitarian Universalist Justice Florida, the New Florida Majority, Florida International University Sea Level Solutions Center, and the City of Miami and Miami-Dade governments to collect King Tide data and work with residents of Shorecrest, Miami.

This partnership was based on the Rising Together model or increasing climate resilience in low-income communities of color in coastal Florida. Rising Together was developed under EPA Environmental Justice Small Project Grant ( EQ-00D35415-0) awarded to the Green Sanctuary Committee of the Unitarian Universalist Fellowship of Boca Raton. The model is founded on the principles of organizational capacity building within an existing partnering organization led by low-income residents in the community and includes a congregational partner working with the community’s existing leadership on project design and outreach planning. Janice T. Booher is the Rising Together Project Director. She also is a board member of the Unitarian Universalist Fellowship of Boca Raton (UUFBR), where she chairs the Climate Change Working Group and a design team member of the Florida Interfaith Climate Action Network (FL-ICAN).

Our Shorecrest study area was north of the Little River canal. According to the Housing and Urban Development (HUD) Community assessment tool, 19 to 32 percent of residents in the area live below the federal poverty level. The 2015 American Community Survey reported a total population of 30,047 in Shorecrest’s zip code; 54 percent were White (including Hispanic or Latino), 39 percent,   Black or African American, and 30 percent were Hispanic or Latino (of any race). Roughly one-half of housing units in the area are owner-occupied. Many of the apartments and condominiums that are rentals are concentrated Shorecrest’s southeastern corner where flooding occurs predictably with the King Tides, creating parking and other challenges.

The original project design included training residents to collect flooding data, however, due to Hurricane Irma and in consideration of the needs of Shorecrest residents, representatives from partnering organizations and FIU students were trained on 18 Ninth Month to collect data using the Fulcrum mobile app and water samples for coliform and E coli testing. On 19 and 20 Ninth Month, the representatives and students collected data flood data including salinity and water depth. (On 6 Tenth Month, residents were trained to collect data and during the morning King Tide flooding on the 7th, data was collected in the field using the Fulcrum app and other instruments.)

As with other Rising Together projects and a neighborhood survey was conducted. The purpose of the survey was to understand and communicate the public health risks associated with floodwaters and king tides. The survey instrument was available in English, Creole and Spanish. Shorecrest Climate and Health Fact Sheets also were made available in English, Creole and Spanish.

The Unitarian Universalist Justice Florida’s Climate Resilience Ministry is interested in continuing the partnership with SEYM and has other projects in Boca Raton, Delray Beach, Fort Myers, Hernando County, Naples, Sarasota, and West Palm Beach. Jan Booher is exploring funding opportunities for Rising Together projects in the Tampa-St. Petersburg and Broward County areas.

Many thanks to Jan Booher and the other partners, especially the residents of Shorecrest, Miami!

“We got through Irma. And now the king tides are coming.”  (Miami Herald article with more on Community Health Mapping in Miami; photo & mention of our FSE work)