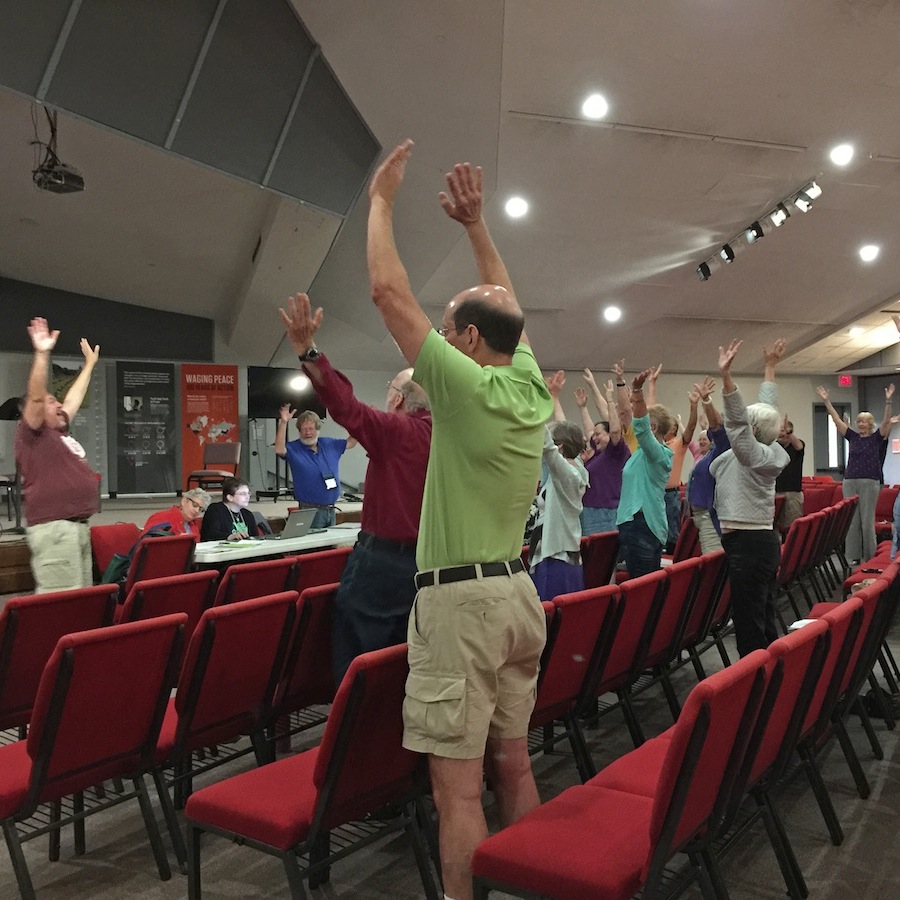 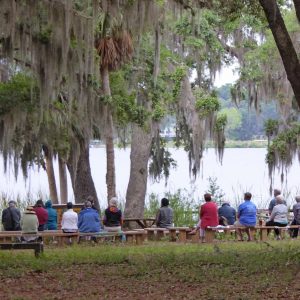 Early morning worship at the lake

Friends felt spiritually renewed at the SEYM Gathering as we participated in retreats, deepened our understanding and witness in workshops, worked on important issues, felt inspired by Sa’ed Atshan’s lecture, and enjoyed our time together in worship, worship sharing, and just relaxing and having fun. Highlights of Yearly Business Meeting included approval of a minute on Stopping Gun Violence and the decision to hire a Youth and Young Adult Coordinator. 116 adults and 11 youth attended the Gathering, held March 28 – April 1 at the Life Enrichment Center in Fruitland Park, Florida.

Why Are We Led To Care For The Earth? was the first Retreat, held Wednesday night and led by Earthcare Committee members Bonnie Zimmer & Bill Carlie. We felt deeply enriched by listening to each others experiences in worship sharing on the query “What are the things and/or experiences that fundamentally move us spiritually to care for the Earth?” Members of the Earthcare Committee took notes on our responses to begin writing an SEYM faith statement on care for the natural world. 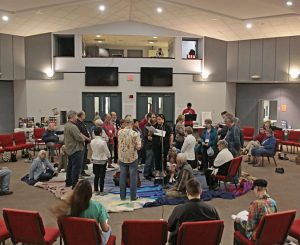 The second Retreat, Roots Of Injustice, Seeds Of Change: Toward Right Relationship With Native Peoples, was profoundly moving. Jane Westberg and Kody Hersh led us in a ceremonial re-telling of the story of the violence done to Native Peoples in North America, from the Doctrine of Discovery (1493) to present day. At the beginning of the retreat, blankets were spread out in the center of our large circle to symbolize the North American land area inhabited by Native Peoples before Europeans arrived, and participants stood on the blankets to represent the Native population. As narrators told the history of Native Peoples’ suffering at the hands of the Europeans— slaughter, wars, disease, broken treaties, and other injustices—the blankets were slowly rolled in, showing the loss of land; and participants, group by group, left the circle, representing the loss of the population. Friends were deeply affected, and at the end of the retreat we had some time to share our reactions. In our Sunday business session, we approved a minute repudiating the Doctrine of Discovery. 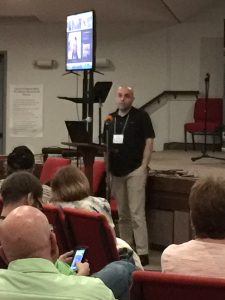 In the Walton Lecture Saturday night, Quaker Response in Turbulent Times, Sa’ed Atshan told stories of people confronting injustice with courage and non-violent resistance, drawn from his life experience of growing up in Palestine during the Intifada, attending Ramallah Friends School, being a Palestinian, Christian, Quaker, LGBT activist, and an educator.  Told with warmth and passion, his stories were at turns humorous, tragic, and inspiring. He emphasized the power in our Quaker use of silence — to give us the courage and inner peace we need to speak out and to carry our witness.

Over 20 workshops—covering a range of topics from deepening our spiritual experience to engaging in active Quaker witness— were offered in 6 sessions over Thursday, Friday and Saturday. Both Youth and adults participated in the Bystander Training. Friends were introduced to the Alternatives to Violence Program in an AVP mini-workshop. 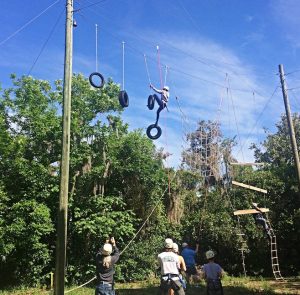 We had time for relaxation and fun— with the Intergenerational Dance and ‘Faith & No Practice Band’ Friday night, singing, fellowship over meals, snack time each evening, reiki and massage at the Healing Center, and just hanging out.

Teens, Young Adult Quakers (YAQs), and Juniors did the Ropes Course on Friday. Juniors and Young Friends enjoyed Archery on Saturday. All age groups attended the Bystander Training workshop. Junior and Young Friends made ‘Parachutes for the Planet,’ which will be displayed in Washington DC in the fall. See the Youth Epistles >

In our Yearly Business Meeting plenaries, Friends enthusiastically approved creating a new staff position: Youth and Young Adult Coordinator. Plans are to hire Kody Hersh (Miami), who was led to propose to do this work for SEYM over a year ago. The Youth Committee brought forward a Job Description and budget, and will be working with the Finance Committee and Trustees to review the budget and work out the funding. The position, modeled on Quaker Volunteer Service, is expected to begin in January of 2019. Kody is currently on the staff of the Philadelphia Yearly Meeting youth program.

We also approved a Minute on Stopping Gun Violence. On Thursday, Miami Meeting brought forward a request that a minute addressing gun violence be written at these sessions, and an ad hoc committee to write one was formed. With input from Friends, the committee worked on the minute until its final approval on Sunday.

The Worship & Ministry Committee announced that our 2019 Michener Lecture will be presented by Eden Grace. They also encourage Meetings to take advantage of FWCC’s Traveling Ministry Program. 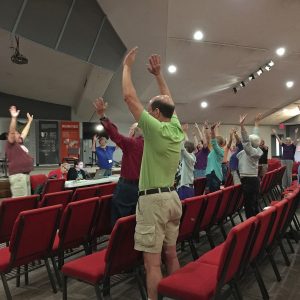 Laughter Yoga in the Sunday plenary

The Peace & Social Concerns Committee plans to visit with Meetings and Worship Groups to listen to what issues and actions they are most interested in. They hope to have a representative and contact from each Meeting and to work on coordinating our witness so we can act together, with a concerted voice. They encourage Meetings to share stories of their concerns and actions on the SEYM website and in the eNews. They plan to offer mini-grants to Meetings for projects. The committee is looking into starting a group to lobby our state legislatures, similar to the Friends Committee on Legislation in California.

The Ministry on Racism Committee would like to facilitate and encourage conversations on White Privilege. They invite Meetings and Worship Groups to read and use the queries in Living the Testimony of Equality (Pendle Hill Pamphlet # 415). Other recommended resources are White Privilege: Unpacking the Invisible Knapsack, and Harvard’s Implicit Association Test.

We heard lots of substantial news from our committees and representatives to organizations. See the Yearly Business Meeting Minutes >

The Epistles capture more of the spirit and flavor of our Gathering.

See it all in pictures in our Photo Gallery>