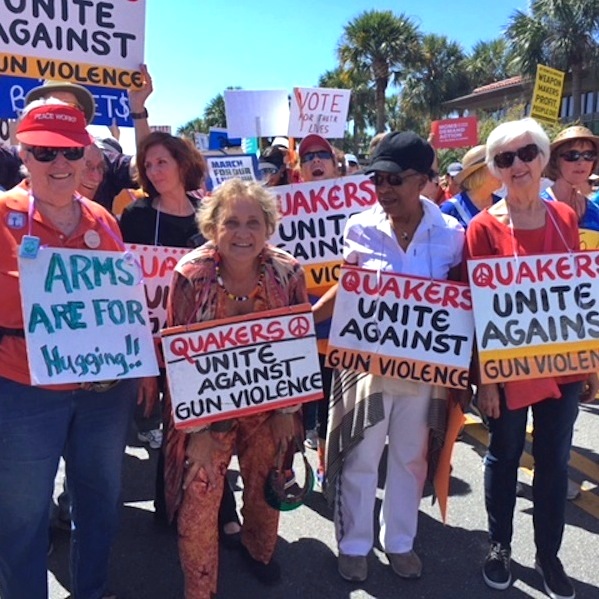 In our Yearly Business Meeting session on Thursday, March 29th, Miami Meeting brought forward a request that a minute addressing gun violence be written at these sessions, and an ad hoc committee to write one was formed. With input from Friends, the committee worked on the minute until its final approval on Sunday.

Friends (Quakers) have a vision of humankind drawing together in mutual care, including reconciliation addressing both the safety of the victims of violent acts and the unmet needs of perpetrators of those violent acts. We are committed to this healing and raising our children. To this end, we demand that our government, school systems, and all adults in the lives of our children take steps to face the root causes of violence in our society. As Quakers, we support the youth in their vision of a world without a ubiquitous background of violence, a world where people learn how to express feelings of anger and pain constructively. This is an issue to unite us in protection of the children and all the people we love. We urge the passage of several pieces of legislation that will make a beneficial difference for all Americans:

Implement a ban on all high-capacity ammunition magazines and military grade semi-automatic weapons.

Repeal the “Dickey Amendment”, to allow federal health agencies to conduct research into the causes, effects, and evidence-based prevention of gun violence in our communities and provide funds for this work though Congressional action.

Repeal Chapter 790.33 of Title 46 of the 2017 Florida Statutes “Field of Regulation of Firearms and Ammunition Preempted,” which now prohibits local governments in Florida (Municipalities, Counties, Cities, etc.) from making any regulations more restrictive than the State laws to control guns or ammunition. We support local governments’ right to pass their own regulations to ensure the safety of their residents and children.

In a larger context, we share distress at the degree to which American culture accepts, uses, and relies on violence by individuals and groups to solve interpersonal and societal conflicts. We ally ourselves with the victims of such violence and with their sense of urgency in seeking reforms through non-violent means.

We affirm our belief, faith, and experience in the power of love, respect, tolerance and friendship as bases for living together with those around us, in family, community, societal and global relationships.

We intend to share this Minute with all people in Southeastern Yearly Meeting and all other Yearly Meetings in the USA, as well as our legislators and the students of Marjorie Stoneman Douglas High School in Parkland, Florida. We encourage Friends to share this concern widely within their communities, to take action and start collaborating. Let us be open to whatever meaningful work our hearts are led to do.