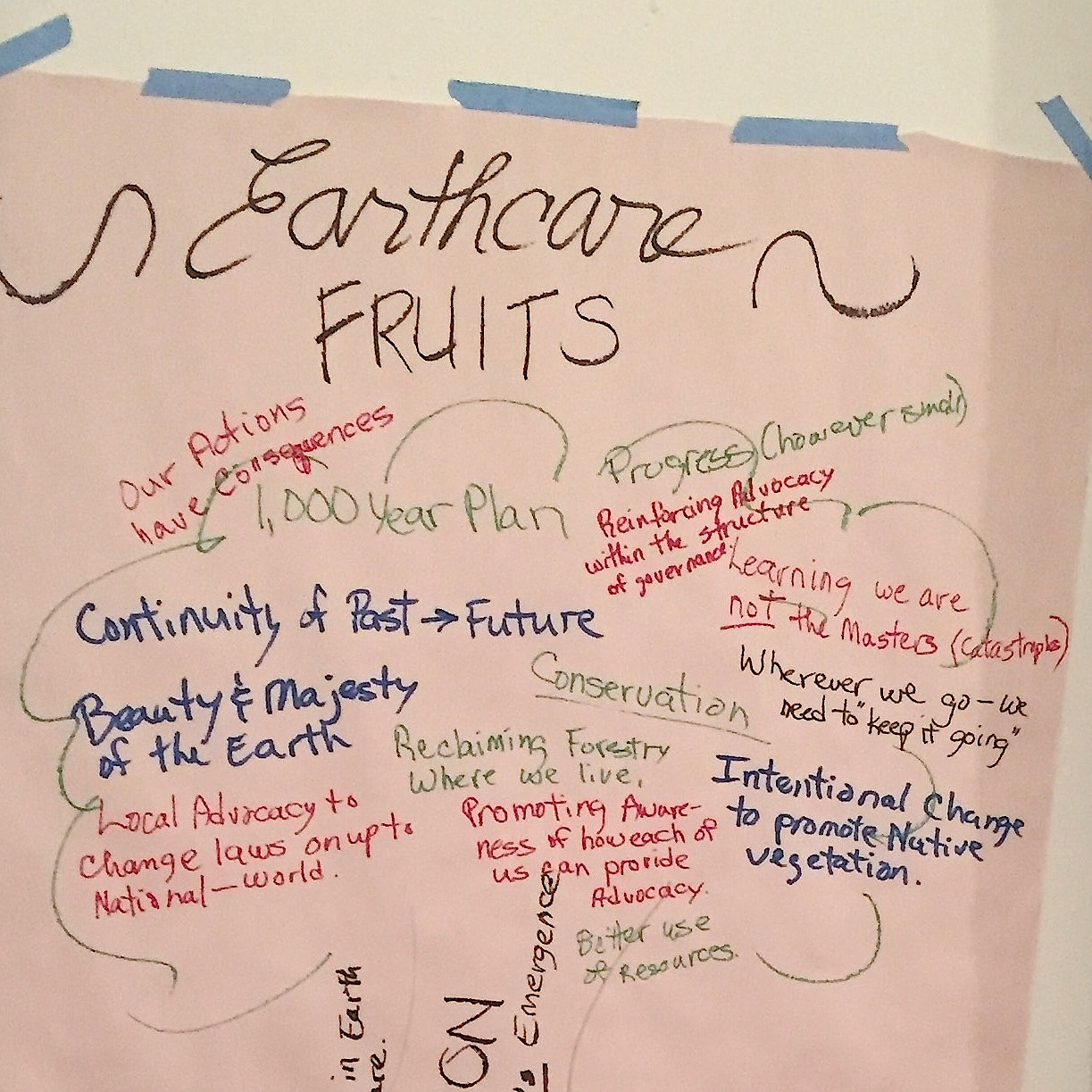 Between 28 First Month and 25 Second Month (1/28 – 2/25) this year, I participated in three Earthcare-focused retreats—Clearwater Monthly Meeting, Palm Beach Monthly Meeting, and Tallahassee Monthly Meeting. This is the first of three pieces where I share some of the concerns, gleanings, and hopes that emerged. While each setting and gathering was unique, I suggested a theme, “Unity with Nature: How am I Called to Care for the Earth?” and some common exercises in the hope of sharing with the Yearly Meeting a general sense of unity among Friends about Earthcare. One exercise that each retreat gathering shared was a variation of the Alternatives to Violence Project brainstorm, Roots And Fruits. The purpose of the exercise was to get participants to think consciously about what Earthcare is; to share our perception that Earthcare is care for the environment, period, and to gather a working understanding on what that means and how we are called. 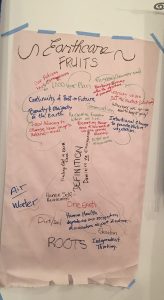 Using a drawing a tree with the heading, EARTHCARE,  a  label ROOTS was written at the bottom; the trunk was labeled DEFINITION; and, FRUITS was written among the branches. Friends were asked to write or have someone write words and phrases without censorship or criticism. If there was disagreement, everyone was free to add another idea but not to argue. Processing included brainstorming on what the roots, definitions, and fruits of Earthcare might include. (As a facilitator, I added ideas with the task of ensuring that equity, social justice, and peace were included.) Additional processing included paying attention to what short-term, individual, collective, and long-term initiatives might be developed. This exercise took place early on in each gathering, immediately following reading and discernment of the Eleventh Month SEYM Queries and Advices “How do Friends meet our responsibilities to the community and the world?” Care of the Natural World.

The results of the exercise remained on the wall throughout each retreat gathering. In addition to incorporating thoughts and ideas from the brainstorm into other activities, Friends were invited to add to the display throughout the gathering. (Friends from Tallahassee Meeting reported that the display remained in place for several Firstdays with additions by Friends who had not participated in the retreat!)

The word cloud shown here contains the more than 30 words and phrases from the Roots section of the three gatherings. The cloud is randomly generated; none of the words or phrases was repeated. The Roots included Friends thoughts and concerns of conditions that were both destructive and promoted harmony.

In addition to other exercises, each gathering reviewed the SEYM Draft Statement on Climate Change, several Quaker Earthcare Witness pamphlets, and a discussion on possible future actions. In the next two pieces, I will share the results of the Definitions and the Fruits from the brainstorm exercises, some of my thoughts on the gatherings, and Friends’ comments from the retreat evaluations.

As I mentioned during the FSE report at Yearly Meeting, my visits during the last year with the Monthly Meeting have been very exciting. Friends spoke of their individual passions for Earthcare work and evidenced their love for each other during the retreats. Thank you, Friends.