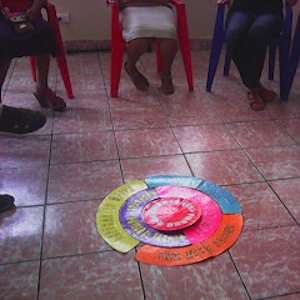 This is the most recent update from Monica Maher, the PLA Coordinator:

I write on the national weekend of mourning in Ecuador; the country is in shock after a journalist team of the country’s largest newspaper were assassinated by FARC guerilla dissidents in Esmeraldas near the Colombian border.   The three men were kidnapped in late March by the guerilla drug traffickers who control the area they were investigating. Ecuador’s new President, Lenin Moreno, has faced criticism for not attempting to negotiate their release. The assassinations follow a series of four deadly bombs on Ecuadorean territory set off by the FARC dissidents in the last few months, driving home in the national psyche that the so-called Colombian conflict has also established itself in Ecuador. There is a sense of great vulnerability, disbelief and sadness.   The irony of this historic moment of violence is its timing, arriving after the signing of the peace accord in Colombia to end the 52-year conflict.

Violence continues in Colombia as well. Along with FARC dissidents, the ELN guerillas remain active since they did not sign the peace accord.   Dozens of community leaders and activists have been assassinated across Colombia since the peace accord. There has also been a spike in violence against women by intimate partners, including several highly publicized cases of feminicide. The insecurity has precluded carrying out the AVP workshops planned for February and March in the Red Zones of conflict formerly controlled by the FARC. Ironically, travel to these zones is more dangerous now. Gladys Cedeño, AVP National Coordinator, and team plan to resume the work in May, after Presidential elections, with demobilized ex-combatants, their family members and victims.   Plans include offering the Trauma Healing workshop in the western Department of Cauca as well as the Basic and Advanced workshops in the central Department of Antioquia.

Another challenge for PLA counterpart, Fundación Sendas de Luz, in Colombia is the new law regarding faith-based non-governmental organizations. There have been several cases of evangelical foundations laundering money, resulting in higher taxes and very demanding regulations for registering all faith-based NGOs.

Honduras continues to suffer under political crisis after the re-installation of President Juan Orlando Hernandez in January based on fraudulent November elections. Widespread civil resistance has been met with harsh armed repression with over 40 people reported assassinated and hundreds more injured or detained.

In this context of political violence, PLA partner of the Mennonite Church, Ondina Murillo, co-facilitated a Trauma Healing Workshops for the AVP community in Ceiba in February; nine women participated. Ondina also co-facilitated a Trauma Healing Workshop in March in Ceiba for elementary school teachers, reporting the results as greater solidarity, unity and community among the teachers. According to Ondina: After these workshops, I feel gratified; to see lives change gives me great joy. 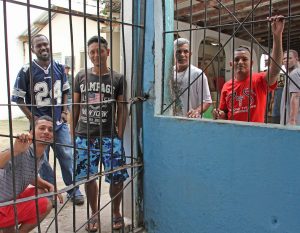 AVP also continues with great success in the El Provenir men’s prison in Ceiba where five internal facilitators remain active and eighty more men signed up to take the Advanced. In response, an Advanced was held for forty participants at the end of February and another is planned soon.

AVP El Salvador entered two new communities in this period.   In coordination with Maryknoll Lay Missioners, AVP El Salvador offered a mini-taller with students, parents and teachers of the Cantón School, La Isla, Metapán, Santa Ana, near San Salvador on February 2. Salomón Medina, AVP National Coordinator, was also very happy to achieve the goal of offering the AVP Basic for leaders of Community 28 of January, Zacamil, a gang-controlled neighborhood of San Salvador marked by severe social and family violence. The seven women in the workshop, held 14-17 March, immediately put their new skills into action: I learned to control myself, above all when my daughter is very difficult; I put everything into practice and it worked for me! They also began to appreciate their own collective wisdom: I learned from the experiences of the others, this serves me well as an example for future situations and to solve current situations; it is very valuable. Participants expressed a marked shift in perspective about violence:   What I learned was that it is not necessary to use violence, to know how to get to a solution for a conflict. My testimony is to listen to new experiences; it has served me a lot to reflect, to think before acting, to know things that I did not know. It has been incredible! The next goal is to hold a Basic with children and youth. More at: https://pavelsalvador.blogspot.com/2018/03/solucionar-problemas-actuales.html 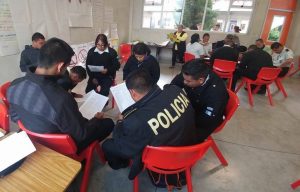 AVP Guatemala continued training the National Civil Police with 41 participants (16 women, 25 men) attending the first part of the Basic AVP Workshop on March 21. Lorena Escobar, AVP National Coordinator, evaluated the work in March with the police; the Police Chaplain, whose office sponsors the program, expressed much gratitude given the visible changes in participant attitudes and interactions.   One police officer described his new perception and hope after the Basic: It is very sad to see how our country is filled with violence; the list of the different kinds of violence is very long. But not everything is bad; when we worked on the roots of violence, I discovered that it is in ourselves that the change begins. We must renew our minds, change habits, patterns. The hope is emerging that one day not too far off, we will be a country of peace.   This motivates me to keep receiving AVP workshops and to learn more skills. Thank you!

Another officer wondered whether AVP really does work:   I came to this workshop with much curiosity because of what I had heard about AVP from my station colleagues who stated they had been able to change their personality, to be more positive, to think before acting to whatever situation of violence. Both their families and work colleagues noticed their internal changes, they no longer think only of themselves but also in those around them, in their work colleagues, in their sector which is, without a doubt, very violent.   Also they said they do exercises that make them laugh uncontrollably; someone told me I´ have been able to pull out the child that I carried inside for 40 years, I feel free, I feel happy. ´ Forgetting for a moment all the stress. And here I am giving testimony that all my colleagues told me is true. I liked the exercise of affirmation in pairs. Never had I been given the opportunity to tell someone all of the good that is within me. Ha! Even I did not believe it! I felt like a peacock with wings open. And later, when we played the games, yes, we sure did laugh!   Thank you facilitators; it is excellent work you do.

In the context of extreme violence which Guatemala continues to endure, Lorena Escobar, AVP National Coordinator, remains strongly optimistic: Personally I feel satisfied with the work done. I realize that – in spite of the fatigue, late nights, early mornings to arrive to meetings, the time invested in the preparation of each workshop – my efforts have been worth it. I am motivated everyday by listening to the testimonies of the participants, observing their changes and seeing how the tools of AVP are replicated in other groups. This gives me the certainty that AVP works!  I am also motivated seeing new, key spaces beginning to open where I am sure that AVP will transform and renovate minds, where what will emerge is a culture of peace for which all of us long.

Her new medium-term goal is to train 2,000 people in AVP in Guatemala.

The PLA Working Group decided to write job descriptions for each WG Role, beginning with Clerk, drafted by Cece Yocum and Val Liveoak. Finally, the PLA Working Group held the second Visioning Session on 22 March which birthed new collective dreams and ideas for the future, including nurturing and sharing more intentionally the spiritual dimensions of our individual and collective work.