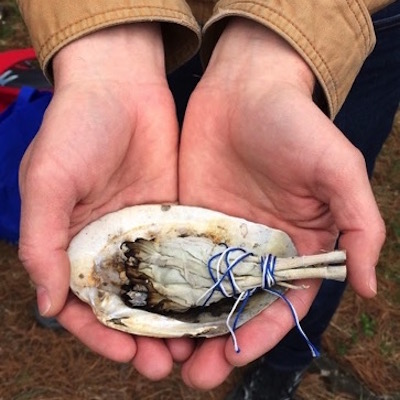 As a member of Christian Peacemaker Teams, Kody Hersh (Miami) went with a delegation of the Indigenous Peoples Solidarity Team in May on a visit to Grassy Narrows, the Asubpeeschoseewagong First Nation in Ontario.

He sends us this story: 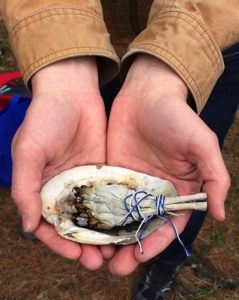 It would be easy to talk about Asubpeeschoseewagong (Grassy Narrows) First Nation by naming a litany of horrors. Some of these are common among the First Nations peoples of what we now call Canada: Children torn from their families to live, and sometimes die, in residential schools. Cultural erasure. Generational trauma. Alcoholism. Environmental destruction. An epidemic of missing and murdered women, girls, and Two Spirit people.

Others are very specific to Grassy Narrows and neighboring Whitedog Nation: a paper mill that dumped mercury upstream for over a decade. The emergence of mercury poisoning symptoms among huge numbers of residents. The clear-cut logging that diminished the land’s capacity to absorb and heal. The discovery in 2015 that, as the community had long suspected, the mercury poisoning had an ongoing source: a pit of barrels buried secretly by mill employees in the 1970s. Provincial and national governments concealing evidence and trying to evade responsibility for clean-up. A compensation board plagued by accusations of racism and corruption, that has awarded financial assistance to mercury poisoning victims at the exact same monthly rates (not adjusted for inflation) for 32 years.

These are, because of the ceaseless advocacy of Grassy Narrows community leaders and activists, now fairly well-documented stories. (see Learn More below) 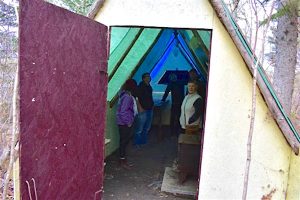 What I really want to say about the community of Grassy Narrows is about their fierce, stubborn, vibrant resilience.

In 2002, tired of watching logging companies deplete their traditional lands, the community of Grassy Narrows First Nation decided to blockade the logging road running through their reserve land. All through the northern Ontario winter, Grassy residents and their supporters camped out at a blockade site just off the road, ready to block any logging truck that tried to pass. They called on Christian Peacemaker Teams to accompany them in this act of resistance. Their action brought international attention to the community, and to issues of environmental justice and indigenous sovereignty. 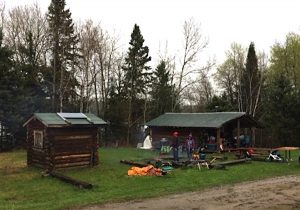 Judy DaSilva, a community leader and activist, tells the members of our Christian Peacemaker Teams delegations stories about the blockade when we visit Grassy a few times a year. We have a cookout, introduce ourselves. Eventually, Judy lights the sacred fire inside one of the blockade site’s wigwams, and we go in, and we listen, as she teaches each new group about the history of Grassy Narrow’s struggle against cultural erasure, ecological destruction, and environmental racism.

In our visits with Judy and other community members, we learn about the blockade as one facet of a long story of resistance, healing, and self-determination. There are so many other threads. We drive past a school where the community now educates its own children in harmony with Anishinaabe cultural practices, beliefs, and identity. We sleep in the Trappers Center, a reclaimed mission church building where the hunters and trappers of Grassy Narrows share resources and space, and pass on their skills to others. I fall asleep reading posters put up by the addiction recovery groups that also use the center, emphasizing recovery through re-connection with traditional Anishinaabe beliefs and practices. 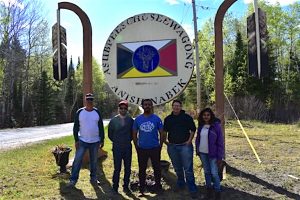 Some participants in the May 2018 Christian Peacemaker Teams– Indigenous Peoples Solidarity Project delegation stand in front of the sign marking the entrance to Grassy Narrows First Nation. photo: Kody Hersh

I went to Grassy Narrows for the first time in the fall of 2016, as a participant in an Indigenous Peoples Solidarity Team delegation. Last month, I returned as a co-leader for a new group of delegates. The first trip shocked, horrified, and overwhelmed me, as I learned for the first time about many of the long-term impacts of settler colonialism on indigenous communities. This second trip was still full of grief, anger, and profound regret for the harm that has been done by European colonialism, and that I as a settler benefit from every day.

But through all that, I begin to really hear the stories of resistance. I think about the small steps that communities I’m part of have taken to start to understand and dismantle the living legacy of colonial power structures and ideologies. I am learning how to fully, truly hear a long, complex, painful and beautiful story of survival, and reflect on how to be faithful to my own small piece of solidarity and accompaniment.**

Kody Hersh has been a member of Christian Peacemaker Teams for three years, and is a reservist with the Colombia Team and the Indigenous Peoples Solidarity Team.

• For in-depth information on mercury contamination, see the Toronto Star, Landmark study reveals ‘clear evidence’ of mercury’s toll on health in Grassy Narrows> . There is also an excellent documentary video series on YouTube, Scars of Mercury>

• For resources on steps that settler (non-Native) individuals and organizations can take towards justice for indigenous peoples, check out the downloadable pamphlet, Paths for Peacemaking with Host Peoples>

• For general and Quaker-specific materials on the same topic, Boulder Friends Meeting’s website for the Towards Right Relationship with America’s Native Peoples project is a great source.