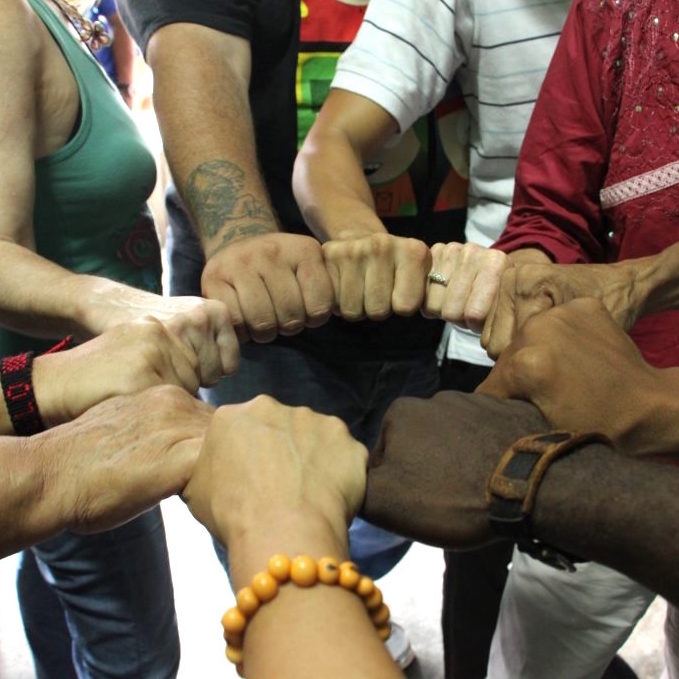 “I would like to again thank SEYM, monthly meetings and individuals who have supported Peacebuilding en las Americas. SEYM members might not realize it, but their contributions help stem the tide of people fleeing these countries if we can help prevent more violence.

“We (PLA) will also be considering if and where we can provide assistance to help with the recovery from the volcano in Guatemala.”

Unexpected obstacles emerged in the region in the last months, including a volcanic eruption in southern Guatemala (in early June) and extensive flooding in western Colombia (in mid-May). An estimated 100 people were killed by the volcano 27 miles southwest of Guatemala City, while 300 were reported injured, 200 missing, 3,000 evacuated and 1.7 million affected by the ash. In Colombia, 600 people became homeless and tens of thousands ordered to evacuate after a hydroelectric dam under construction on the Cauca River caused extensive flooding affecting eight municipalities; while no one was killed, two schools, two bridges and a health center were destroyed. Important to note, a local movement had emerged against the dam megaproject for its potential negative effects with three community leaders assassinated before the flooding.

Despite the difficult contexts, all programs continued their work during this period. A new bright spot on the horizon was approval by the PLA Working Group of a pilot project in Ecuador, described at the end of this report.

Political challenges in Colombia have not ceased. The right-wing party, opposed to implementation of the peace accords, won the Presidential run-off elections in May. Violence of dissident armed groups pose ongoing threats to community leaders and women activists. Nonetheless, Gladys Cedeño, AVP National Coordinator, and team resumed programming as planned in May, traveling to Caldono in the western Department of Cauca, a Red Zone of conflict formerly controlled by the FARC to work with demobilized ex-combatants, their family members and victims.   Unfortunately, severe flooding on the Cauca River made a full Trauma Healing Workshop impossible for the 17 participants hoping to attend. Instead, eight members of the indigenous Nasa community, 4 men and 4 women, arrived to take part in a short workshop 14-15 May before rushing back to their homes as floods began again. 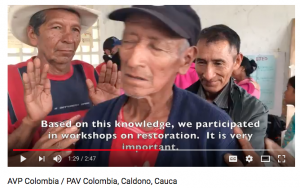 Despite the many obstacles, interest remains strong on the part of Nasa leaders in Cauca to transform their territories from a route of war to a passage of peace as told compellingly,thanks to PLA Communications Specialist, Allie Prescott, in a new 7-minute video>

PLA counterpart in Colombia, Fundación Sendas de Luz, has successfully completed all the new paperwork required by the government to remain a legal non-governmental organization. Overwhelmed by the new tax and bureaucratic regulations in addition to the excel financial reporting for PLA, Gladys Cedeño has found a professional accountant experienced in working with international non-governmental organizations who will assist her with financial documentation moving forward. 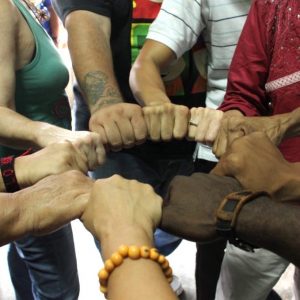 AVP flourishes in the El Provenir men’s prison in Ceiba where five internal facilitators remain active. Eighty men signed up to take the Advanced; after forty took the workshop in February, another Advanced was offered for the second group in April. According to PLA partner, Ondina Murillo of the Mennonite Church, once an incarcerated man has taken an AVP, he is considered to be in rehabilitation and is therefore less likely to be transferred to the newly-built high security prisons which Ondina asserts are inhuman.

Programming is underway with authorities in Ceiba for AVP training of police officers with the first workshop planned for late June.

PLA partner of the Mercy Dream Weavers Program in San Pedro Sula, Nelly Delcid, co-facilitated a Basic Workshop on 24-26 May in the Almenia neighborhood of Progreso, Yoro with nine women defending their territories. Several of these long-term human rights defenders have been criminalized and received death threats. With successful completion of the Basic, an Advanced Workshop is now planned for July.

AVP El Salvador had a very positive AVP Facilitator Gathering on 21 April. Eleven people attended from Zacamil, Suchitoto, Co-Madres and the Maryknoll Congregation; the spirit was high, the sharing sincere and the sense of community strong.

In April, AVP National Coordinator, Salomón Medina, was happy to attend for the first time a community event of the Universal Peace Federation. 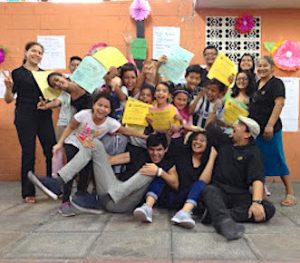 On the 19th and 26th of May, AVP facilitators carried out a Basic Workshop with 20 teenagers and pre-teens of four high-risk communities of Zacamil, a gang-controlled neighborhood of San Salvador where family and social violence abound. Offered over two consecutive Saturdays, attendance was excellent. Participants expressed:

• I learned how to prevent violent situations, about Transforming Power. I liked the talk, and I also liked to talk to find out what we have in common. It was fun! I learned to be non-violent. I liked it because it was not religious.

•  I learned that we can be ourselves, without masks, without lies, that we could get to know each other.   I liked everything because it was very fun to commuinicate with people I did not know and to be together during all this time. Well, this was for me a great experience because (I learned) we can be ourselves.

•   I learned that you have to put into practice Transforming Power. (The workshop) has been very nice and has meant a lot because I can practice this a lot, and I met many new friends!

•   I learned to look for solutions that are not violent or will not lead to violence. I liked the games and the teachings because they are good for my life; I will put them into practice in my daily journey.

Given the very positive response of the youth, facilitators would like to follow-up by offering the Advanced Workshop in Zacamil this year. Inspiring photos and additional testimonies, documented by Salomón Medina, may be found on his blog, pavelsalvador.blogspot.com>

AVP training continued successfully with the National Civil Police. Forty-one officers participated in the second part of the Basic Workshop on April 25, and thirty-one participants, 10 women and 21 men, attended the third part of the Basic on May 24. 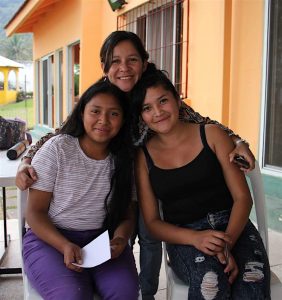 • I learned that I should have love for myself, then for my neighbor, also to respect ourselves as a community, not to judge, discriminate or harm other people.

• With what they taught us, I learned that I have to know how to communicate my feelings and to listen to other people, also to control my fear, my nerves and my character. And, with the tools I learned today, I know I can achieve it.

• I learned that I have to act and respond with decisiveness and responsibility in order to avoid misunderstandings. Thanks for the help and the orientation.

• I learned that I have to control my anger, know how to say what I think and feel without fighting or yelling, not remain silent nor hide or flee from conflict.

• I liked participating in the workshop very much because today I learned that I have to respond and act based on my own decisions and not act out of shame or because of what others might think or say.

• I learned that I should not allow bad experiences from the past to continue to govern my life and that putting into practice the Transforming Power mandala, the AVP bases and guides, I can change my life because I have the right to be happy and I have the ability to help others be happy too. I have to change my lifestyle to transmit peace and to show others they can achieve it and be of benefit to our families and our community.

In the words of Lorena Escobar, AVP National Coordinator and Facilitator:

“It is a new experience every time we facilitate an AVP Workshop; a diversity of thoughts exists in every participant; each one takes from every exercise what will help them in this very moment of their current lives. When they express their feelings, we see how AVP becomes living, effective and functional in each life. When a workshop ends, new challenges emerge, processes commence; it is there when it begins to be palpable, that latent Transforming Power… Thanks to all those individuals and organizations who, without knowing our small country of Guatemala, have made…it possible.”

Lorena was in immediate contact on Sunday, June 3 after the volcano erupted south of Guatemala City, near Antigua, Guatemala. Antigua is a common gathering place for AVP facilitators in Guatemala; all members of the AVP community are safe, though shaken by the tragic destruction. According to Lorena:

The catastrophe which occurred this past June 3rd was very lamentable with the devastating eruption of the Fuego Volcano; it was very sad and painful to see so many images of what happened. I cried because my heart was in pain and in solidarity with all those people who lost their lives. According to official preliminary statistics, there were 110 dead, 197 missing, and more than 1.7 million affected in addition to a thousand houses destroyed. I tell you that Guatemala has never united in solidarity like this before to continue looking for family members, even after the 72-hour cut-off stipulated by the government. Still, the people continued searching with the help of other countries, without the national government, which after 72 hours withdrew the army and other workers. Shelters continue in various places but especially in Alotenango close to the site of the catastrophe, now called Ground Zero. There are three things that have not ceased in this place: the rain, the lahars (volcanic flows of mud/debris) and the help. The people affected have received food stuffs, clothes, sheets, cots and medicines which have been distributed to the various shelters, as well as psychological help for adults and children. Now one hopes that the government will offer them a place to live and support them with construction materials. I ask for your prayers because the Fuego Volcano is still active, and so is the Pacaya Volcano. Let us pray for those people who continue alive with burns on 50, 60 and 80% of their bodies. May God have mercy on our country.

On a positive note, the PLA Working Group in May approved a pilot project in Ecuador with the women’s branch (Jambi Mascari) of a confederation of 41 rural communities in the Andean Highlands, the Union of Peasant and Indigenous Organizations of Cotacachi (UNORCAC). The project will be carried out in collaboration with an established organization in Quito which has successfully led AVP Workshops in the women’s prison and is well-known for advocacy on human rights and the rights of nature, the Regional Foundation of Consultation on Human Rights (INREDH). INREDH will offer a series of AVP Workshops in Cotacachi with indigenous Kichwa women leaders of Jambi Mascari who are interested in empowering other Kichwa-speaking rural women and indigenous youth. 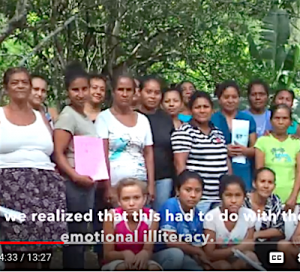 From our AVP Coordinators: 2018 marks five years supporting workshops with indigenous Tolupan women in Locomapa, Yoro, who are in defense of their territory against illegal mining on their ancestral land by transnational mining companies involved in the illegal extraction of natural resources. The companies have intimidated the population involved in local resistance. Several Tolupanes who defended their land rights were assassinated with impunity. For Tolupan women, violence is not only an external threat but a norm inside their homes due to high rates of domestic violence.   In AVP workshops, women have learned about their rights and begun to use their voices as leaders in their tribe. Here is a youtube video we did about the Tolupanes: AVP with Tolupan Indigenous Women>

This is video of a young Nasa woman talking about the some of the work in Colombia: AVP Colombia: Workshops with Nasa in Caldono, Cauca >

One of our AVP facilitators, who also works with conscientious objectors, talks about violence in Colombia in this video: Why is AVP Important in Colombia?