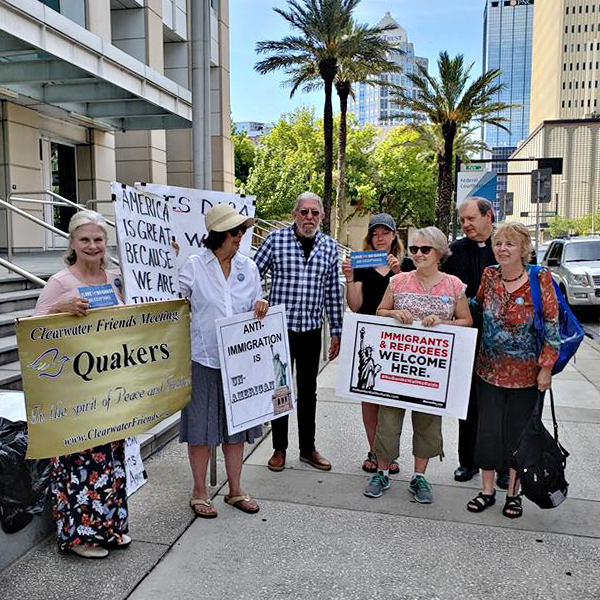 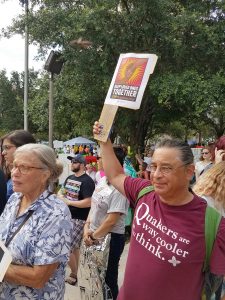 SEYM Friends have been active in protesting the separation of children from their families and the treatment of immigrants at the Mexican border, participating in demonstrations, visiting Senator Marco Rubio’s offices, and sending letters to their congresspersons.

A number of Friends across SEYM participated in demonstrations held the week of June 23 -30. Clearwater Friends report that several members attended rallies in Tampa and Gulfport.

On June 23, Miami Friends joined the rally and march to the Homestead detention center where immigrant children are being held. AFSC was a sponsor of this action; American Friends Immigration Service (AFIS) is located in Homestead, Florida.

“…as we got near the facility, air horns went off warning of an approaching storm and urging us to take shelter, which there wasn’t any. Then came the deluge, with lightning and horrendous thunder. We got drenched…. The program got truncated because we were all crowding under truck beds near the Air Base. There was an open-air canopy 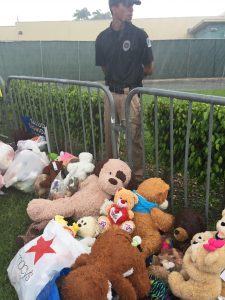 where there was to be a program but hundreds of people were crammed beneath the canopy and it was chaotic.

“Despite the downpour, which lasted for most of the March down to the center and back, spirits were high and people were saying they were glad they came, even though they looked half-drowned. Reports of crowd size varied from hundreds to 2 to 3 thousand. We carried our new banner and we got hugged by strangers for being Quakers!

Tampa, St. Pete, Clearwater:  Cece Yocum (Tampa), Robin Kennedy of Catholic witness, and Russell Meyer, Executive Director of the Florida Council of Churches, met with Marco Rubio’s staff about family separations and immigration on June 26th, at his office in the Federal Courthouse in Tampa. 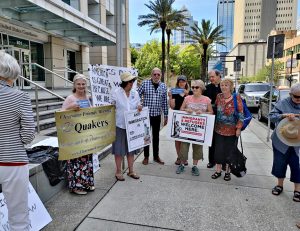 “Russell Meyer, Robin Kennedy and I were greeted outside the Federal Courthouse on Tuesday morning, June 26th, by folks from Tampa, Clearwater and St Pete Meetings, as well as other friends, who had signs protesting the current immigration procedures. We prayed together before we went in and they prayed for us and held us in the Light for our visit with the Rubio staff members.

“I thought we made a good team together. I think we not only presented facts and ideas, but spoke from the heart. Sometimes these meetings can be just an exchange of information but I think this was more than that.

“We met with Taylor Sanchez and a USF student intern. I was glad that Taylor said he was going to pass on the handouts we gave them to the DC office. Looking back I can think of 100 other things I wish I had had time to discuss with them, but the idea that FCNL and others have is that we are establishing a relationship and we can build on that over time. I felt like Taylor could be a good connection.

“Our major asks were:

• Condemnation of the cruel “policy” on border immigration, especially pulling children from parents.

• Alternatives to Detention that have worked in the past and are less costly, highly effective, and far more humane.

• A new Marshall plan for immigrants. I brought up the work that NGOs are already doing and referenced the work of Friends Peace Teams working with gang members, as well the protection of indigenous people who are being forced off their lands by outsiders for tourism and mining. Taylor wrote down the name of Berta Caceres, after I stated that Honduras has the highest level of murder of women and the highest rate of killing of environmental activists.

• Support the Feinstein legislation. Mr. Rubio had already signed onto the Tillis bill.

“Because they gave us an hour, we went all over the place with history, geography and politics, which was really great and gave what we had to say depth and context.  An important point that Russell developed was the concept of the family being the foundation of being humans and to take that away from someone is profoundly inhumane. Robin said at one point, ‘this is not who we are or think we are.’ ”

“Our witness spanned the voice of the church and of society. We also insisted on seeing the current crisis with children as the outcome of decades of refusal to acknowledge the fundamental causes of immigration on the Southwest border. In brief, we broke the civil order in Central America, and now we have to pay for it. Long years of the Cold War and the Drug War have fueled the most extreme violence in the world. This is what we have done with the Monroe Doctrine. It’s time for confession and a re-direction of efforts. Instead of walls and detention centers, we need a Marshall Plan for Central America.

“We’re in this for the long haul not immediate results.” 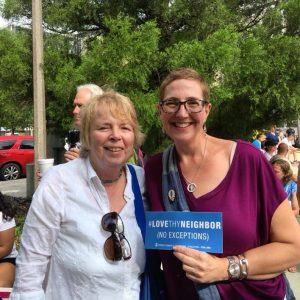 For Friends who also want to contact or visit their members of Congress, Cece recommends these papers that can be used as resources or handouts:

Tampa Friends are having a letter-writing campaign using these resources, along with sample letters on the FCNL website and adapting them to their own experiences and concerns. 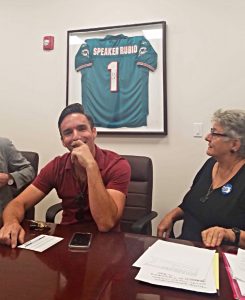 “We delivered a clear and unequivocal message: We want Senator Rubio to take a leadership role now in mitigating the crisis of children separated from their parents pending political asylum hearings. We were in no mood to listen to vaguely worded proposed legislation. We insisted that Senator Rubio has a special obligation to stand up for immigrant rights since his hometown is a city of immigrants, many of whom know first-hand the lingering effects of the separation trauma they experienced as part of Operation Pedro Pan. A Cuban-American historian in our group stressed the decades of privileged immigration status that Cuban-Americans enjoyed and the special obligation Cuban-Americans should feel to push for humane treatment of all immigrants seeking refuge. A devout Catholic in the group urged Senator Rubio, as a fellow practicing Catholic, to take to heart the Biblical teachings to welcome the stranger, to feed and clothe them and help keep them safe. We urged a return to previous administrations’ policies of alternatives to detention and provided empirical evidence of how efficient and cost effective those policies were, in spite of what President Trump says. We shared the American Psychological Association evidence of the detrimental effects of children being separated for long periods from their parents. We brought up the violation of articles 5,9 and 14 of the Universal Declaration of Human Rights adopted by the UN in 1948.

“We do not know whether our visit will have any impact. But we each conveyed the personal pain we all feel about this situation and asked that next time we want to talk directly to our Senator so that he hears not just our words but the anguish in our voices.”

Tallahassee:  In their Meeting for Business on July 1st, Tallahassee Meeting approved a statement, The Immorality of the Department of Justice (DOJ) in the Separation of Children from their Parents, which is being sent to their Congresspersons and other Government officials. They also approved a shorter version as a Letter to the Editor, Immorality of Trump & DOJ Zero Tolerance Policy. 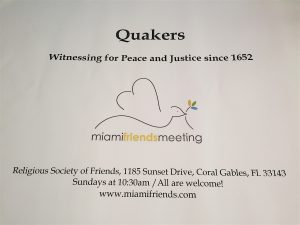 This is an ongoing story. Please send in news of your Meeting’s actions and advocacy to the SEYM Secretary: office@seym.org.