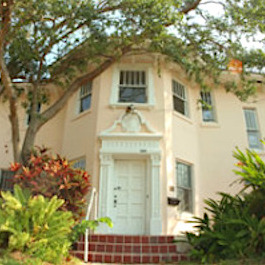 Miami Friends Meeting welcomed a Salvadoran refugee into our faith community last First Day. Her name is Morena, mother of Osmar, age 12, who was taken from her at the border crossing point two months ago. He is living in a New York immigration detention center. She has been able to speak with him twice. Each time, after reassuring her that he was being treated okay, he broke down and cried. She was barely able to tell us this without crying herself. 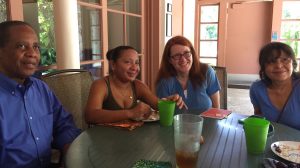 We learned only a few details during our pre-worship coffee hour. We were careful not to ask too much too soon. She had just arrived the evening before, after spending two months in the Otay Mesa Detention Center near San Diego. We prepared a guest room in Bartram House, the Friends property across the street from the Meetinghouse. A bilingual pre-school occupies the ground floor. Upstairs the AFSC has an office, as well as the South Florida Interfaith Worker Justice. Morena will be living in the “guest room,” awaiting the day of her political asylum hearing. She is one of the lucky ones to be legally processed and not sent back right away. Apparently, she has a strong case for asylum, which means she has suffered from gang violence. That’s all we know at this point.

She sat quietly in meeting for worship, hands folded in her lap, an ankle monitor strapped to her right leg, her whereabouts being tracked by the Immigration and Customs Enforcement (ICE) agency. At one point, she began sniffling, tears streaming down her face. She readily took a kleenex from the box offered to her and wiped her eyes.

There were messages of hope and healing, joys and sorrows, given in both English and Spanish. Someone sang softly in Spanish about trust and faith. It was a gathered meeting.

I was overcome by a feeling of enormous gratitude for Morena’s presence, a gift we have been given to serve the peaceable kingdom in these days of darkness and despair, a chance to draw nearer in spiritual community with those who have suffered tremendously as a result of the long-term destabilization of Central America, brought on largely by our government’s intervention over decades. 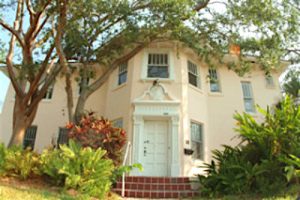 We will learn much as we accompany Morena on this part of her journey. Hold us all in the Light as we wait for her day in immigration court and for the way to open so mother and child can be reunited.

We are hoping Friends in other meetings will offer financial support for the enormous responsibility we have undertaken. Checks can be written to “Miami Friends Meeting” earmarked for the “guest room.” Gracias, Amigos.