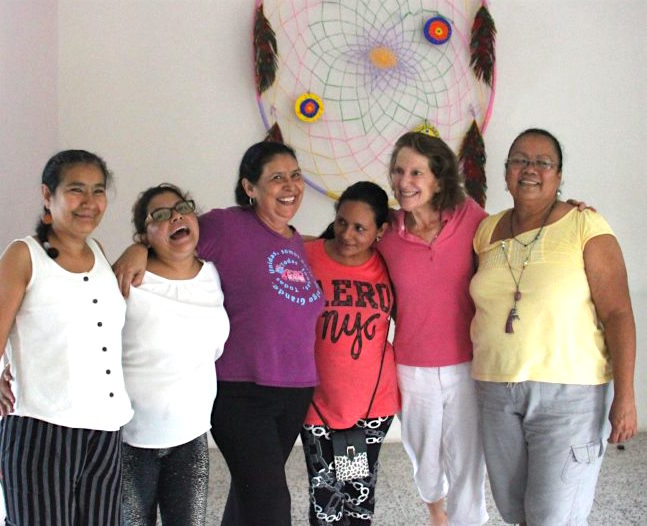 Mónica Maher, Coordinator, sends us this update on the work of Peacebuilding en las Américas (PLA), an Initiative of Friends Peace Teams that brings Alternative to Violence Project and trauma healing workshops and other peacemaking support to vulnerable communities in Colombia, El Salvador, Honduras, Guatemala, and Ecuador.

With recovery underway from the June volcanic eruption in Guatemala and flooding in Colombia, Peacebuilding en las Américas counterparts continue their work undaunted and with the same dedication as ever.   Their persistence and unshakable faith in the power of non-violence to transform injustice stand out as a model for all. New life is evident as the work expands to historically oppressed and underserved indigenous peoples, including the Arhuaco in Colombia and the Kichwa in Ecuador, and as Country Coordinators enthusiastically plan their first Face-to-Face Gathering in Latin America.

Ivan Duque, leader of the right-wing party that opposes implementation of the peace accords, is the new President of Colombia. Violence of dissident armed groups continues to pose threats to community leaders and women activists. Overall, a sense of disorientation and uncertainty pervades with respect to the future of peace in the country.

Within this precarious environment, peace work at the grass-roots level has been more urgent than ever. Committed AVP Facilitators brought training to new communities. This included a Basic Workshop in Montería, Cordobá on June 10-11.

In addition, an AVP Basic was offered for the first time with the Arhuaco indigenous community in Santa María Magdalena, western Colombia. There were a total of 36 participants, 21 youth and 15 women. AVP Colombia National Coordinator, Gladys Cedeño, and Yesid Campo facilitated the workshop on July 4-6 and were thrilled with the enthusiastic response of the participants. 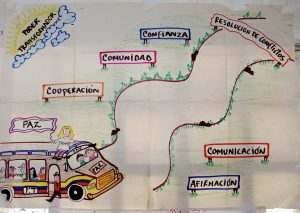 Gladys Cedeño and Yesid Campo also traveled to Caldono in the western Department of Cauca, a Red Zone of conflict formerly controlled by the FARC, which recently suffered extensive flooding.   Here, they offered a Trauma Healing Workshop on June 24-25 with 11 participants, including three women, members of the Nasa indigenous community. Interest remains strong on the part of Nasa leaders to transform their territories from a route of war to a passage of peace as told compellingly in this 7-minute PAV Colombia video>

Finally, in the Department of Antioquia, another former zone of conflict, AVP Facilitators held an Advanced Workshop on July 13-15 in the town of Urabá. 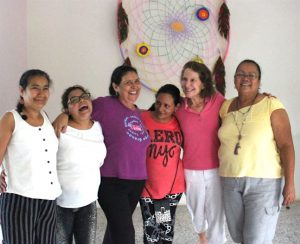 AVP training of civil police officers has begun in Honduras. Inspired by the success of training police in Guatemala, Ondina Murillo, of the Honduran Mennonite Church, co-facilitated an AVP Basic for members of the police force of La Ceiba on June 19 and 26.

AVP National Coordinator, Salomón Medina, co-facilitated an AVP Mini-Workshop for eighteen parents in Las Delicias, La Libertad on June 9. The event was held in collaboration with the Maryknoll Lay Mission.

AVP Facilitators, Mario Gonzalez y Noehmi Gonzalez, traveled to Spain at the invitation of the Light and Life Community Church (Iglesia Comunidad Luz y Vida). They offered an AVP Mini-Workshop for fifteen people in the town of Rivas-Vaciamadrid on June 9.

Salomón Medina, member of Friends Evangelical Church of El Salvador and committee member-in-training with AVP International, received an invitation to participate in the New England Yearly Meeting and Quaker Religious Education Collaborative in the United States in August. After much work, he successfully obtained a 10-year visa from the US Embassy in San Salvador. He is very happy to be able to take advantage of this opportunity to learn from US Friends, present on El Salvador and create deeper ties for collaborative peacework. Shirley Way, Jens Braun, Minga Claggett-Borne and Jonathan Vogel-Borne are among the Friends hosting him in New York and Massachusetts.

Lorena Escobar, AVP Guatemala Coordinator, visited two shelters in Alotenango Sacatepéquez and Escuintla which house homeless survivors of the eruption of Fuego Volcano. The catastrophic eruption on June 3 resulted in an estimated 110 killed, 200 missing and 3,000 evacuated. Approximately 600 are currently housed in shelters. After her visits, Lorena successfully helped to organize an AVP Workshop for survivors.

AVP Facilitators held the first part of a Basic Workshop in one of the shelters in Antigua, Guatemala on July 3-4. According to Lorena:

“It was very difficult to motivate them (workshop participants) since they had lost loved ones, had family members still missing, had lost their homes, were without work, without anything so their emotional state was very low. Even in these circumstances, we were able to encourage, affirm and in some moments evoke a smile in the people who had not smiled since the day of the disaster. Their priority has been to recover their family members and their belongings… they think only about their future and beginning a new life from zero. We hope to continue with the AVP training once they have a stable home.”

Men and women residents of a marginalized neighborhood of Guatemala City participated in the AVP Advanced Workshop on July 6-8. They will take the AVP Facilitator Training in their community on August 23-25. 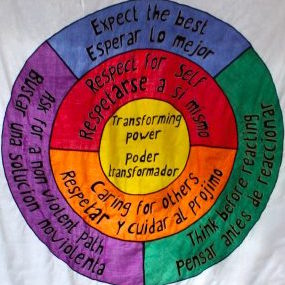 An intergenerational group of women (ages 20-65) received the first part of the AVP Basic Workshop on July 21 at the Presbyterian Church of Tiquisate, 174 km from Guatemala City.

Members of the National Civil Police completed the AVP Basic Workshop on June 20 and began the AVP Advanced Workshop on July 25 in Guatemala City. Training will continue on 22 August.

The Regional Foundation of Consultation on Human Rights (INREDH) is planning an AVP Basic Workshop with members of the Kichwa indigenous women´s group, Jambi Mascari, on September 6-7. The workshop will be held in Cotacachi, a town in the Andean Highlands about two hours from Quito. It will be the first in a series of workshops supported by PLA with the aim of training a group of Kichwa-speaking women as AVP Facilitators.

Monthly calls via Zoom between country coordinators have generated energy and interest for more direct connection. Therefore, country coordinators are planning their first Regional Face-to-Face Gathering for the third week of January in Honduras. Time together will include a visit to the prison in La Ceiba among other activities. Logistical details forthcoming.