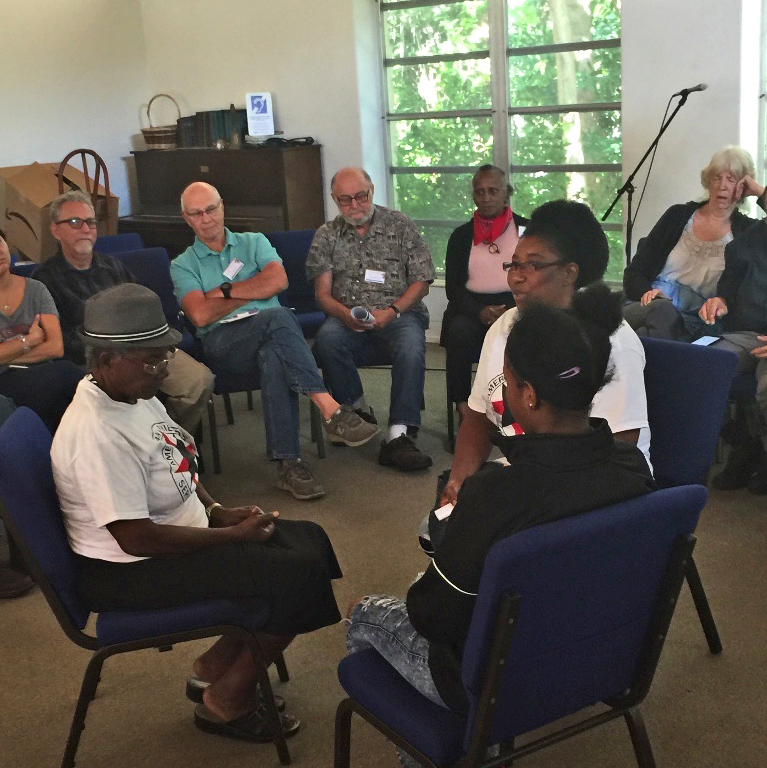 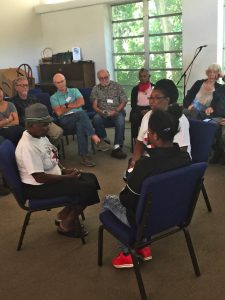 A community workshop on sanctuary and immigration, held Sep. 29th at Miami Friends Meeting, was “very successful,” writes Kathy Hersh of Miami Meeting. The day-long workshop, titled “Building Support and Relationships With Immigrant Communities…,” was held to examine immigration and sanctuary issues, and find out what support Friends can give to the immigrant and refugee communities in our midst. There was also a session on bystander training, led by Cece Yocum and Beverly Ward (both from Tampa Meeting), based on issues related to immigration and assisting people who are still dealing with prejudice even after many years in the US. Miami Meeting is currently providing sanctuary for a mother and son from El Salvador, and American Friends Immigrant Services (AFIS) has an office in Miami.

The Workshop on Sanctuary and Immigration was very successful. We have received thank you notes from participants who felt it was informative and inspiring. Kudos to Carl Hersh for organizing everything. Jonathan Fried, of WeCount, gave us an update on the general picture of what is happening nationally and its impact locally. 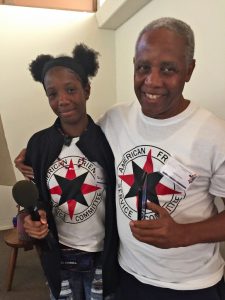 Paul Mondesir (AFIS)  brought several Haitians who informed us about the impending end of Temporary Protective Status (TPS) for many Haitians who will be deported despite years of living in the U.S., causing the break up of families.

We heard about the TPS Caravan, traveling the country to inform people about the dire impact on the Haitian communities if the TPS program is suspended by the Trump administration. Jeanette Smith, of Florida Inter-Faith Worker Justice, briefed us on the legal aspects and the challenges of the sanctuary movement.

After a delicious lunch supplied by the American Friends Service Committee, we had a practical workshop on bystander intervention, how to react to ethnic putdowns, and how to document the arrest of an immigrant by ICE without breaking the law.

The last session of the workshop we brainstormed on actions we can take to be supportive of immigrants in our community. Here are some of the ideas:

• Promote and participate in literacy tutoring for immigrants who can’t read or write in their own language through an organization called Alfalit, whose mission is to eliminate illiteracy worldwide. Local office number: 305-597-9077.

• Encourage more people to accompany Morena and Antonio to their court appointments and general outings in public. Improve their food storage and cooking facilities in Bartram House.

• Encourage visitation of detained immigrants at Krome Avenue through Friends of Miami-Dade Detainees. 305-394-746. Some of their family members can’t visit because of their own precarious immigration status. Volunteers take in care packages from the detainees’ families.

• Use our newsletter, website, and Facebook pages to regularly promote non-profits working for immigrants’ rights. Write about issues of urgency as they come up, e.g., the suspension of TPS, the status of DACA (Deferred Action for Childhood Arrivals).

• Posting the online link to Carl and Kathy’s documentary, The New Underground Railroad, which lays out clearly the case for sanctuary.

• Provide the link to the short video Paul showed us about the TPS Caravan.

• Have a fundraising event to support the TPS Caravan making its way around the country to educate the public about the impact to immigrant communities if TPS is taken away. Make donations.

• Work with groups like the AFSC and PACT to magnify the impact of our organization.

• Set up a separate Facebook page geared to immigrants impacted by the government’s policies to answer specific questions about TPS, DACA, ICE policies and strategies. The page would be English/Spanish bilingual (extended possibilities for Creole and other languages).

Morena Mendoza and her son, Antonio, fled El Salvador last April in a caravan of hundreds of people who arrived on the U.S. Mexican border seeking asylum. Morena was temporarily admitted and she and Antonio were put in the Otay Mesa Detention Center near El Paso. The same day, Antonio was taken away to a separate place. She did not know where he was for a long time and finally was told he was in a facility in New York City where there were children waiting to be put in foster homes. Antonio was in fear of being taken into foster care and never seeing his mother again. He is 12 and very attached to his mother. 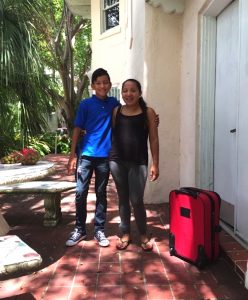 Lis-Marie Alvarado, an attender of Miami Meeting, put her name on a list to sponsor a detainee awaiting a hearing, with Miami Friends Meeting as a co-sponsor, providing the housing for Morena. Morena was released into Lis-Marie’s and our care and has been living in Bartram House, Quaker property adjacent to the Meetinghouse.

Lis-Marie created a Go-Fund-Me Facebook account which enabled Antonio to be released and flown to Miami in custody of ICE until he was handed over to his mother at the Miami airport, where she had to show proof she was the mother. Both have been living in a specially set up guest room for them in Bartram House. After much red tape wrangling, we were able to attain Antonio’s vaccination records and enroll him in school nearby. He is in a special program where he is taught in Spanish while learning English.

Status report on Morena Mendoza and her son Antonio:

Morena is working with a woman from Honduras who has a residential car washing service. The team cleans cars at customers’ homes.  She likes the job and the people she works with. Her boss picks up her up and drops her home every day, except Tuesday when Morena must wait for her weekly visit from an ICE agent to verify where she is. We do not know why this is necessary since she wears an ankle monitor. With part of her earnings, she is able to send money home to her mother who is caring for her 5 year old. Antonio is adjusting to school and, according to one teacher, he is very intelligent and eager to learn. He is in an aftercare program with Brian Olson’s son Aaron. Brian picks them up every day. Antonio loves soccer and enjoys swimming.

This week I went to court with Morena and her lawyer, Lucio Perez-Reynosa, the Director of the AFSC office in Miami. Each person filing for asylum must prove they are at risk of serious harm because of one of the following: race, religion, nationality, political opinion, or being a member of a  “particular social group (PSG), which is a legal term to describe a group that’s recognized in the home community. The members of the group must have things in common that they can’t change.

Morena’s case is based on belonging to a social group of women are extremely susceptible to abuse, domination and death threats from all sectors. So the cultural and political context of war-ravaged El Salvador is extremely pertinent in her case.

The Judge is a woman who is by the book. She explained clearly to an asylum applicant ahead of us in the crowded courtroom, that asylum is granted on the basis of fitting into one of the categories and “is not based on sentiment.” The INS sets narrow conditions in order to avoid setting broad precedents that would encourage more immigration from similar groups.

After hours of listening to cases, it is apparent that the cases heard that day by that judge are being pushed through the system as speedily as possible. Lucio and Morena will appear again in INS Court on Wednesday, October 10 at 8 a.m. to enter the completed application into the system.

We thank all our Friends and Monthly Meetings who have helped support Morena and Antonio. Now they need to be held in the Light more than ever and Lucio as he prepares the case.

You can make donations to Miami meeting with the reference to “Guestroom.” This will help with funds for supporting Morena and Antonio now and hopefully in the future.