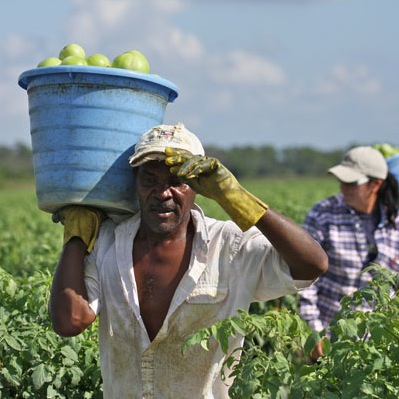 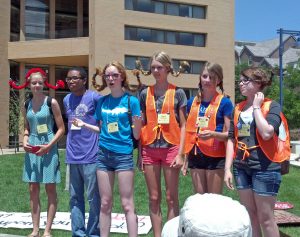 SEYM has a long history of supporting the work of the Coalition of Immokalee Farm Workers, going back decades; and now Friends in SEYM are re-connecting with CIW and it’s Fair Food Campaign. For a few years, our SEYM Youth were active with the Alliance for Fair Food; they had immersion visits to Immokalee, and led Friends in nonviolent actions such as ‘Wendy Walks,’ not only in SEYM, but also at the FGC Gathering.

At Fall Interim Business Meeting (FIBM), representatives from CIW visited the SEYM Peace & Social Concerns Committee. Gerardo Reyes Chavez was one of the speakers; here are two videos where he speaks about Worker Driven Reforms, and a TEDx talk on how farmworkers with no power in our society has brought large national corporations to the table.

The Peace & Social Concerns Committee encourages Friends to re-engage with supporting this vital work. Since FIBM, two Meetings, Tampa and Miami, have taken further action to connect with CIW and the Fair Food Campaign. 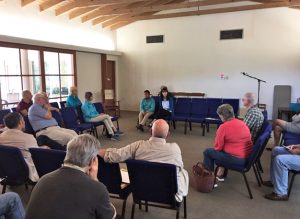 They began their session by learning about the horrendous working conditions in Florida fields: the lack of shade in the hot south Florida tomato fields, the long hours without breaks, lack of toilets, sexual harassment, and in some cases, slavery conditions. Workers, paid by the pound of tomatoes they picked, earned far less than minimum wage. 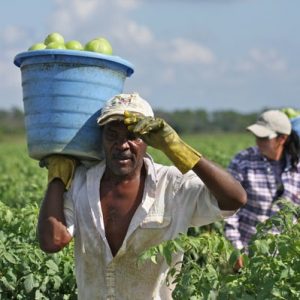 They learned the history of the Coalition of Immokalee Workers’ actions to address their working conditions, which, in the beginning, brought only a few hard-won changes. Then they launched their Campaign for Fair Food with three demands: That workers be paid an extra ‘penny a pound;’ that fields operate under a code of conduct that includes giving workers access to shade structures and clean water, the right to take breaks when workers choose, clean and accessible bathrooms, elimination of verbal and sexual harassment, and zero tolerance for forced labor; and that an official avenue of communications be opened for farmworkers to seek redress of grievances.

The Campaign asks retailers—large corporations, fast food chains and grocers, to sign on to the Fair Food Program, “a unique partnership among farmers, farmworkers, and retail food companies that ensures humane wages and working conditions for the workers who pick fruits and vegetables on participating farms.”

Using the power of consumer demand—with actions like demonstrations, letters, and media to pressure the retailers—was key to bringing these corporations to the table. The first campaign focused on Taco Bell and went from 2001 to 2005. Bringing Taco Bell to sign agreements really meant dealing with the parent company, Yum Brands.

By 2011, 90% of Florida tomato growers had voluntarily come to the table. Today there are 14 corporations who have signed on to the Fair Food Program; but there is much more work to do to bring more national retailers on board. Two main holdouts are Publix, which is a family-owned Florida-based corporation, and Wendy’s. Wendy’s is trying to deflect consumer pressure using a program that investigates conditions, but doesn’t have farm workers’ input. 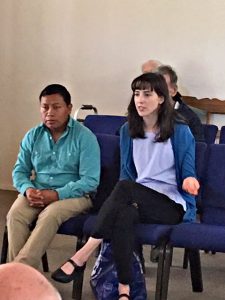 The Fair Food Program is a highly effective, groundbreaking “new form of human rights program that can be called Worker-driven Social Responsibility (WSR).” It is “designed, monitored, and enforced by the very workers whose rights it is intended to protect.” It has received global recognition for its power to transform the workplace; The UN says it “Must be considered an international benchmark in fight against modern-day slavery.”

For the hour of Meeting for Learning, Miami Friends listened, took notes, and asked questions. One Friend expressed concern for the future: Where will future farm workers come from? And what provision will be made for aging farm workers?

Oscar and Maria concluded the hour by encouraging Miami Friends to get involved by joining the Wendy’s boycott. Friends can send letters to Wendy’s, call their headquarters at (614) 764-3100, and also endorse the Wendy’s Boycott as a group, which adds to the collective public attention and pressure on Wendy’s. (If you send the endorsement letter, please scan a copy & send to CIW, then mail it to the Wendy’s headquarters.) (note: see more ideas for action in the Tampa story below.) At this time the CIW is not asking for a boycott of Publix, but it was made clear that, of course, individuals may decide not to shop there, or might inform the management of their concern that Publix also sign onto the Fair Food Program. 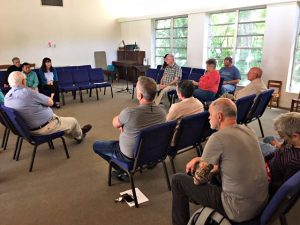 “Later that day, the Miami Friends Meeting Peace and Social Concerns Committee discussed our morning Meeting for Learning to determine what to present to business meeting for next weekend for further action. Certainly we are considering how to support the Wendy’s boycott, and we are looking into how a congregation may become an ally of the Alliance for Fair Food. There is interest in what other meetings of SEYM will do with CIW and the Alliance, and how we may act to inform other religious bodies in our area about the ongoing struggles for justice in the fields of Florida, and how engaging with the CIW and the Alliance can further establish equitable and fair treatment of farm workers, and full preservation of their human rights.” 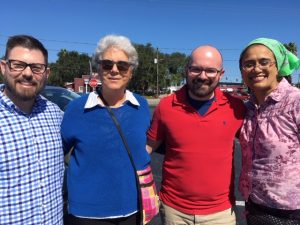 On October 28th, five Tampa Friends helped deliver a letter to a local Wendy’s to ask them to join other fast food chains in participating in the Fair Food Program, a groundbreaking partnership between farmworkers, growers, and major food retailers that has been widely credited with vastly improving agricultural working conditions across the country, ensuring safer working conditions and increased wages for farmworkers. The Wendy’s chain has resisted joining the Fair Food Program since its inception.

This event was organized by CIW and announced on their website and Facebook page. This kind of action does not require a large group; participants for this event included the Tampa Friends, someone from an interfaith coalition, some people from the community, and two from a Methodist church in St Pete. This action was featured in a post as part of the Student/Farmworker’s Alliance’s “Pulling Back the Curtain on Wendy’s” National Week of Action. 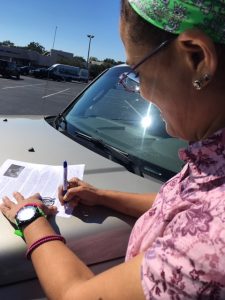 The group gathered in front of a Wendy’s location at a shopping center. They talked about the action, then set up a plan to walk in and ask to speak to the manager. Participants signed the letter, and then went inside to deliver it to the manager. Kaya, a new Tampa attender, delivered the letter, while Cece Yocum spoke about the reasons why the Fair Food Campaign was needed. She writes:

“In my brief talk to the manager I focused on the aspect of providing safe working conditions such as opportunities for breaks, water, shade in the fields and freedom from physical and sexual abuse, as well as a way to monitor abuse.

“Involvement in the action last week also was exciting and some of our newest attenders commented on how nice it was to be involved in an action.”

Delivering letters to Wendy’s managers is just one form of action in concerted strategy that has successfully brought other major national retailers into the Fair Food Program.

“ ‘We are a rock in Wendy’s shoe, one that hurts Wendy’s, and when it can’t take it anymore, it will have to take out the rock, and on that day they will sign into the Fair Food Program.’

About the letters to franchise managers

Oscar Otzoy, CIW farmworker leader, sent us this explanation about the meaning behind presenting letters to the manager of franchises of the corporation-of-focus in the Campaign for Fair Food:

“The Fair Food Program has returned dignity to all workers. It has returned to workers’ the voice that all workers need in the industry. And more than anything, that is what we tried to explain when we entered here in Wendy’s. They gave us the respect we deserved and had us wait for the manager. We were able to speak with the manager for 2 minutes. We explained very quickly what the letter contained and why we are here with you all today. We asked that they send that letter to their supervisors so that they could notice the pressure taking place on a national level. As workers, we know that much of the time, the workers inside of the Wendy’s perhaps don’t have that power to make a direct change toward what we want. But by giving us their attention for a few minutes, they give us the perspective, the vision, that they are going to give us what we want as workers, which is to send the letter to the CEO. And we hope that also, with that same interest, the CEO of Wendy’s can take the letter, and see the urgency that there is to change the conditions of the workers who are working in the greenhouses where abuses continue to happen. We know that one day, change will happen through their action, because no resistance from any corporation can last for centuries. We’ve lasted years. We don’t know how many more years we’re going to continue pressuring them, but we know that one day, Wendy’s will come to the table. And we feel proud as always that you all, as people of this city, have joined forces with the Coalition of Immokalee Workers. Thank you for the work that you do every day.”

“In essence, the manager letter is another way to pressure the corporation.

“In terms of actions where these letters are presented, every action where we go to a Wendy’s or Publix, a letter is presented to the manager. In the same suit, flyers are distributed to the public. One aspect is educating everyone involved, in all their capacities (whether as consumer or member of the Wendy’s chain of command) about what is going on and why this is urgent– the goal being to communicate the campaign to everyone. Wendy’s managers have a role more significant than the average consumer. Whether or not the executive actually receives the letter, the aim of the CIW is this: “We are a pebble in Wendy’s shoe. But we are growing that pebble bigger and bigger until Wendy’s has to do something about it.”

“Publix and Wendy’s have not made a public response to the letters, as I don’t think any corporation has. They don’t like to formally recognize our actions — even with the return from buying tomatoes in the abuse-ridden Mexican industry to buying in the US and Canada in direct response to heightened CIW action, they still declined to acknowledge this was in recognition of the CIW. They don’t want to give us any power or admit that they’re doing anything wrong. Still, going back to the pebble in the shoe thing, we know that the more people who speak up to them, especially people inside their own company, the more they will be compelled to join.”

Here are the current letters to Wendy’s and Publix managers:

Student Farmworker Alliance sfalliance.org   a national network of students and young people organizing with the Coalition of Immokalee Workers.