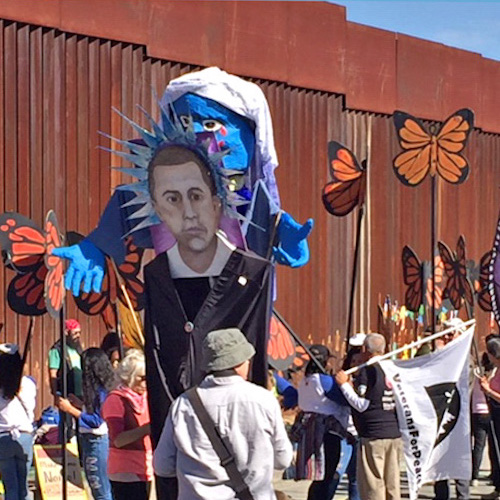 St. Petersburg Friends Gwen Brown and Sarah McCown traveled to Arizona in November to participate in protests and actions at the Mexican border organized by School of the Americas Watch (SOA). Here is their story: 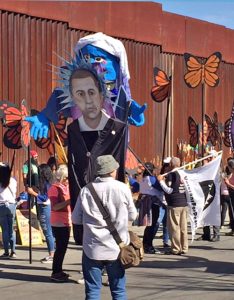 the puppetistas at the wall. photo: Sarah McCown

The Border Encuentro (meeting) is a weekend of protests, workshops, entertainment and solidarity in the border towns of Nogales, Arizona and Nogales, Sonora. It is organized by SOA Watch and a collective of organizations, both national and local who protest U.S. border policies and also provide assistance to immigrants. The SOA Watch protest at the School of the Americas in Columbus, Georgia started in 1990 to protest the U.S. training of military and police from Latin America that has been a source of hundreds of documented human rights abuses. The gathering was moved to the Mexican border in 2016 in order to draw the connection between militarized U.S. foreign policy in Latin America and the steady migration of people trying to escape extreme poverty and violence in their home countries.

Our trip to the Border Encuentro was educational and inspiring. Gwen and I traveled to Tucson, Arizona on November 15th for the 3 day Encuentro starting on Friday the 16th and ending on Sunday the 18th. Our St. Petersburg Monthly Meeting held us in the light as we traveled, perhaps we did have a little trepidation that it might not be safe. Any fears were unfounded as we joined in solidarity with many people of faith communities and others who share a commitment to ideals of peace, justice and non-violence. Over 1,000 activists attended the Encuentro from all over the U.S.

When we arrived on Thursday, more than 70 participants from the U.S. and a few from Mexico had been engaged in a full day training on how to stop U.S. arms entering Mexico. On Friday, a caravan from Nogales came to Tucson for a protest rally outside weapons manufacturer, Milkor USA. From the rally the caravan proceeded an hour east of Tucson for a candlelight vigil at Eloy Detention Center, a privately owned prison which houses 1600 persons. The complex in Eloy is desolate. Co-located with five prisons, the complex is huge with brilliant lights that flood the complex. Speakers focused on human rights, the causes of migration and the power of solidarity. Music was a big part of the vigil and persons inside Eloy could hear us. The message: You are not alone! You are not forgotten. 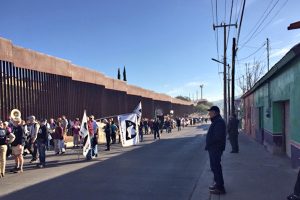 Veterans for Peace had a strong showing and led a march Saturday morning through Nogales, Arizona to the Mexican side of the border where a stage was set up for speakers and music throughout the morning. The afternoon was devoted to workshops on both sides of the border.

A workshop titled “Disappeared: How the U.S. Border Enforcement Agencies are Fueling a Missing Persons Crisis” described policies called Prevention through Deterrence. This policy of increased surveillance at populated border crossings has resulted in people attempting to cross at wild and remote areas where it is dangerous and rough terrain with little access to water. Local people give humanitarian aid by leaving jugs of water, food and blankets. Border patrol destroy this aid when they come upon it, even knowing it may mean death for the migrants. Other deadly policies were explained by the group, No More Deaths.

Another workshop was a screening of the local documentary, Undeterred, a story of community resistance to border militarization in Arivaca, Arizona. This film documented the inspiring story of a small town that protested being hemmed in by border checkpoints. Their creative protests resulted in the removal of one of those checkpoints.

The young people packed to overflowing, a workshop in Sonora, “Hip Hop vs Neo-liberalism” by Rebel Diaz. This was a multi-media presentation on the parallel histories of the beginning of Hip Hop, neo-liberalism and the Pinochet dictatorship in Chile. The father of the Hip Hop artists was in the room. He had been tortured and held prisoner in Chile for 3 years.

Another workshop looked at walls and borders and where they are the focus of tensions around the world. Participants were from Israel, Mexico, U.S. and other communities where neo-colonization processes are represented by economic exploitation, militarization (e.g., war on drugs), racism and segregation. The sponsor, People’s Human Rights Observatory, requested financial help from the Quakers to continue their trans-national work.

“Organizing Resistance for the Right to Stay: Honduras and Colombia” was a workshop about the private and government supported efforts in these countries to take over resources and remove people from their land. Such removals separate people from their communities, render them landless and create pressure on other communities. The workshop focused on the extent of this repression and collective resistance for the right to stay. 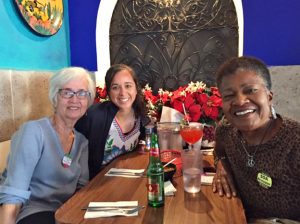 Sunday concluded the gathering with speakers and musicians, the collective reading of the non-violence guidelines and then the litany, names called out of those who died crossing the desert, both those we know of and those who could not be identified. The participants responded to each name with “presente,” an acknowledgement and remembrance of those who lost their lives. Following the litany, the closing activity, emblematic of our solidarity on both sides of the wall, saw people on the U.S. Side jump a fence into a restricted area and come to the wall. On the Mexican side, puppets of butterflies were passed through the wall and waved to the rhythm of the music on the U.S. Side.