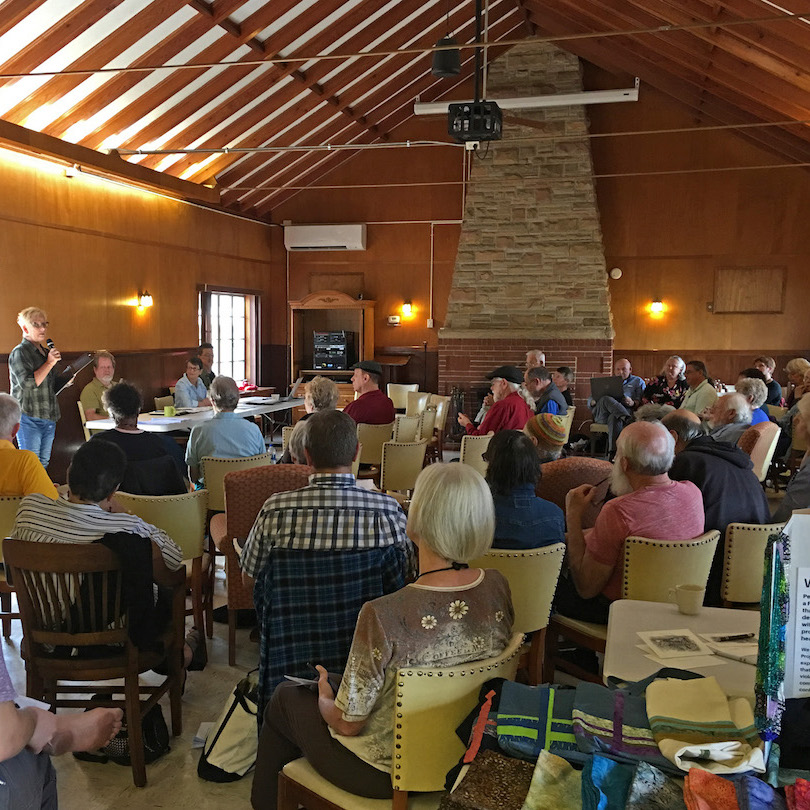 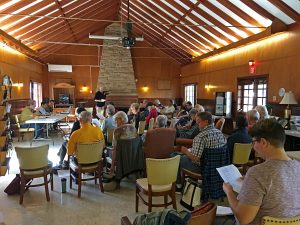 Winter Interim Business Meeting (WIBM) brought together about 60 Friends for a day of lively fellowship as Friends worked together on important issues. The gathering was held Saturday, January 19th at the Orlando Meetinghouse. IBM Clerk Nancy Corindia gathered us into worship at 9am. Committees meetings were held in the morning, and business meeting began around 1 pm, after an amazingly good lunch provided by Orlando Friends.

Here are some highlights:

During the Roll Call of Meetings and Worship Groups, we learned that a new worship group, St. Augustine Friends Worship Group, has been formed under the care of Orlando Meeting; and that two meetings have started mid-week evening worship to reach out to young adults.

Kody Hersh has started working in his new SEYM staff position as Youth & Young Adult Coordinator. A member of Miami Meeting, he has just moved back to Florida from Philadelphia, where he had been working with the youth in Philadelphia Yearly Meeting. He is now living in the cottage at the Orlando Meetinghouse. Plans for his first few months’ work are being finalized with the Youth Committee, who will serve as a Support Committee. 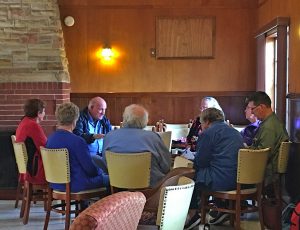 Worship and Ministry co-clerk Clara Diaz reported that they are planning a workshop for the SEYM Gathering, The Language of Love: Speaking and Listening in the Spirit. They are also looking for three more volunteers to convene Worship Sharing groups at the Gathering. The committee took up other issues including vocal ministry and support for new or small meetings and worship groups.

The Ministry on Racism Committee has been concerned not only with racism, sexism, and other ‘isms,’ but also with right relationship with indigenous peoples. Co-clerk Susan Taylor pointed out that we were gathered on ground where Timucuan people once lived, and invites Meetings to find out what indigenous groups lived in your location. 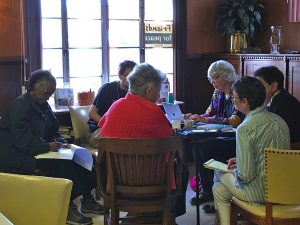 The committee asked Friends to call Mitch McConnell to urge an end to the government shutdown, noting that people of color and indigenous groups are feeling the brunt of its effects. The committee is planning a workshop on micro-aggression for the SEYM Gathering in April. Tallahassee Meeting is establishing a “Community of Remembrance,” working with the Equal Justice Institute.

Peace and Social Concerns committee clerk Cece Yocum reported on several issues they are addressing. 12 Meetings responded to the committee’s poll; issues Friends are most concerned about include climate change, immigration, racism, and mass incarceration, and supporting AVP (Alternatives to Violence Project). The committee is looking for ways that Meetings can work together on issues to have a greater impact. Tampa Friends ask meetings to endorse the Coalition of Immokalee Workers’ Wendy’s Boycott campaign by sending a letter of endorsement to CIW. See their sample letter here>

The Earthcare Committee has drafted a “Testimony to Earthcare,” which will be sent out to the Meetings and Worship Groups for comments, with the hope of approving this faith statement at Yearly Meeting in April. The committee has also initiated a review of the Field Secretary for Earthcare program, with a view to begin including it in the General Fund Budget. There will be two earthcare workshops at the SEYM Gathering.

Field Secretary for Earthcare Beverly Ward reported on her recent visits to meetings and other activities. She visited FCNL to talk about climate and environmental issues. She continues her work with QEW’s UN Working Group, which is planning three side events for this year’s UN High Level Political Forum. Beverly will be a featured speaker on the first night of the FGC Gathering, to be held in Grinnell, Iowa June 30 – July 6, 2019. WIBM wrote a minute of support for her as she represents us at FGC. See the announcement on the FGC website> 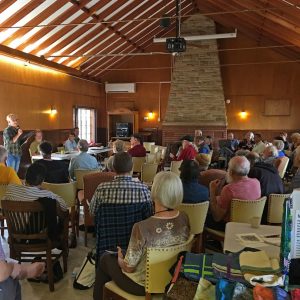 Karen Putney gave the FCNL Representatives report. Many SEYM Friends attended the Quaker Public Policy Institute in November to lobby members of Congress. A report on the event, which drew 400 participants, Prophetic, Persistent, Powerful, can be found on the FCNL website.

An impromptu report on American Friends Service Committee was given by Richelle Ogle (St. Augustine Worship Group), who works for AFSC. As part of their ‘Love Knows No Borders’ campaign, AFSC convened faith leaders at the Mexican border on December 10th. 32 people were arrested, and the protest was reported in over 2600 articles and videos across the country. She recommends Friends read Why I Got Arrested at the Border, a Friends Journal article by Lucy Duncan (who will be one of our Walton Lecture & Retreat leaders at the SEYM Gathering). Richelle also talked about the under-reported work of the AFSC-Miami staff, who do tremendous work helping immigrants, even defending them in court. Kathy Hersh related how AFSC-Miami’s assistance to Miami Meeting’s work of providing sanctuary to an immigrant family (Morena and Antonio, from El Salvador), had brought the two organizations much closer together.

Eduardo Diaz encourages Friends to go to the FWCC Section of the Americas meeting in March, which has the theme “Come and See.” This gathering will bring together Friends from different branches of the Quaker tree. SEYM’s Joel Cook (Treasure Coast) will be one of the featured speakers. 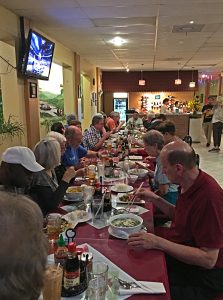 Friends heard several other reports during the day. Joel Cook presented his Treasurer’s Report for the second quarter of our Fiscal Year 2018-19. Jack Bradin shared news from Quaker Earthcare Witness (QEW), speaking eloquently about their decades of work to nurture the spiritual ground of Friends’ unity with nature. Warren Hoskins, reporting for the Quaker United Nations Office (QUNO), said The UN is working on a bold agenda that includes reforms and a global compact on migration.

The meeting closed around 4 pm. Friends went dinner at a local Vietnamese restaurant.

The WIBM Minutes will be posted soon.

Corrections: an earlier version of this article said Morena and Antonion were from Guatemala; they are from El Salvador.