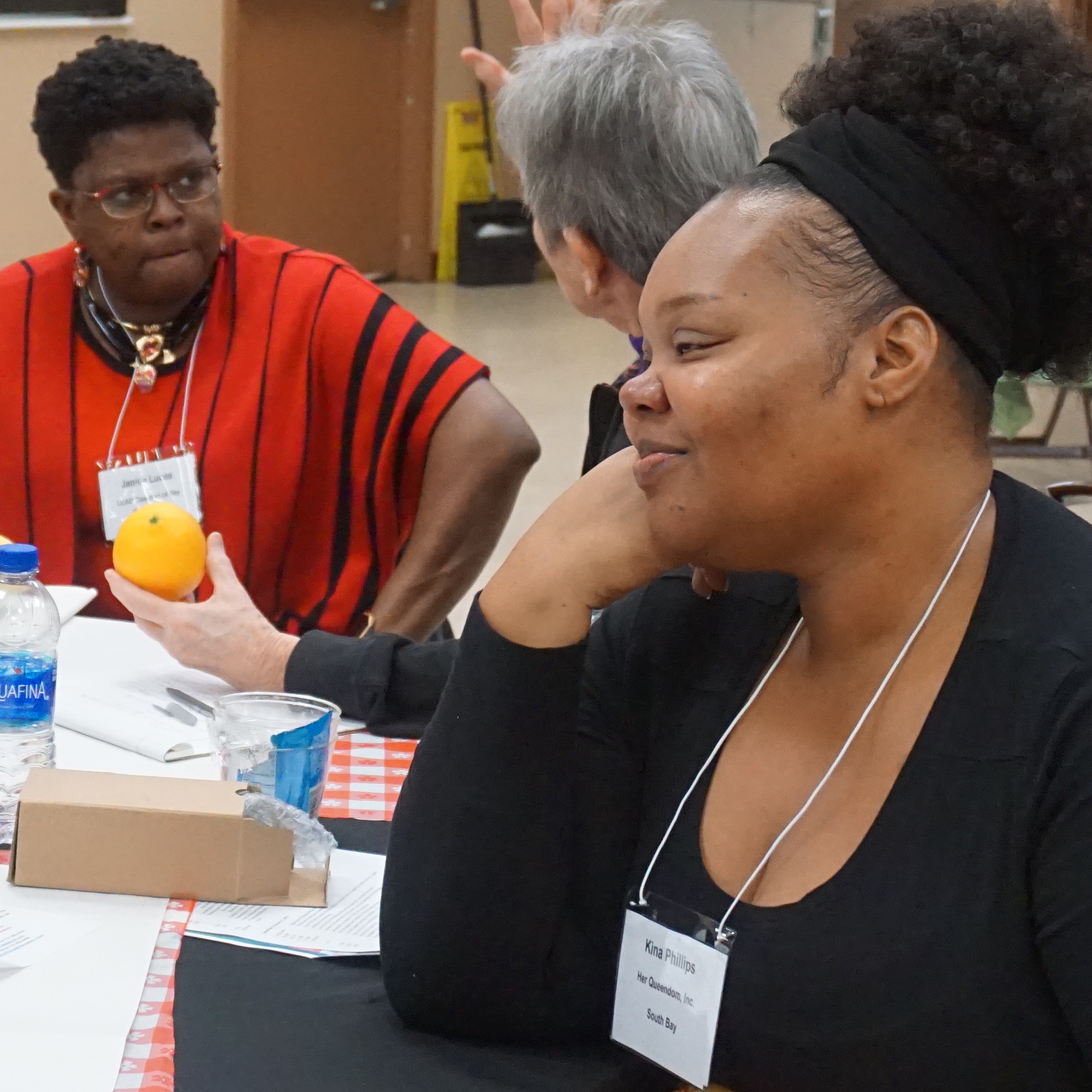 This year’s Florida Interfaith Climate Actions Network (FL-iCAN) Assembly, held February 1-2 in the Callahan Neighborhood Center in Parramore, Orlando, expanded on the work and issues brought forward from the Fourth Assembly, specifically as related to climate justice. Last year’s assembly was convened in the Parramore area to bring attention to the environmental impacts of past land uses and how climate degradation may intensify these impacts. In addition to deepening the discussion of these issues, we also sought to lift up the voices and concerns of the Mercy Drive area, also in Orlando; the Shorecrest Community in Miami; the City of South Bay, Palm Beach County; the Dunbar community in Sarasota, and the Florida Panhandle. 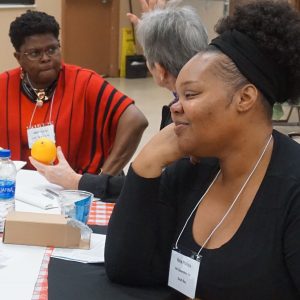 Below are the stories from residents of these communities. Special thanks to Jan Booher, Director, Unitarian Universalists Justice Florida (UUJF) Climate Resilience Ministry for her compilation of these stories.

The Parramore area contains a gasification plant Superfund site created by the fossil fuel industry. Superfund sites throughout Florida threaten drinking water. While in operation, the gasification plant heated coal to produce gas for cooking, lighting, heating, and industrial uses. This process created a number of byproducts and waste material that was released into the soil and upper aquifer groundwater. Very young children in Parramore have had cancer and residents living near the Superfund site have suffered with respiratory issues and cancer. Lawanna Gelzer has led the community’s efforts to have a health disparities study conducted, which is currently underway in conjunction with University of Central Florida researchers. The community continues to resist gentrification that has been spurred by the Brownfield activities to clean up the soil and groundwater. There are concerns over the movement of toxic soil and water during hurricane wind and flood conditions. The increased intensity of hurricanes due to climate change has heightened the need for emergency shelters in Parramore. There are no safe emergency shelters in the community.

Lawanna Gelzer founded the Neighborhood Empowerment Project in Parramore, is the President of the local Chapter of National Action Network, and provides leadership for 100 Black Women. She is a member of the Steering Committee of Florida Interfaith Climate Actions Network.

Our natural systems mitigate the effects of climate change. Wetlands provide natural filtration of our waters and aquifer recharge. Wetlands also are the nursery grounds for many species of wildlife. The Mercy Drive area of Orlando has wetlands that are currently being paved with impervious surfaces to develop two industrial warehouses that will create an anticipated 700 large truck trips through the Mercy Drive community daily. Dr. Jones, a resident of the Mercy Drive area and a Professor of Biology, has created an inventory of species in the habitat that is being destroyed. At least one Swallow-Tailed Kite nest has been destroyed by the development. The Swallow-Tailed Kite is an Audubon Society Priority Bird because climate change has greatly reduced its range. Dr. Jones is leading the efforts in her community to have the City of Orlando honor the protected status of the wetlands in her community. Dr. Wanda Jones has founded Save the Wekiwa River and Headwaters, Inc.

Shorecrest, Miami sits on the lowest land in the City of Miami, and is experiencing extraordinary tidal flooding due to climate change induced sea level rise. During Hurricane Irma, the Shorecrest community experienced flooding that displaced residents and destroyed cars and other personal property. The floodwaters were from Biscayne Bay and the Little River. Raw sewage was released into Biscayne Bay due to power outages associated with Hurricane Irma and septic systems in the community just north of Shorecrest flooded releasing contaminate into Biscayne Bay. This led to Eric’s efforts to increase hurricane resilience. In association with the Florida Disaster Resilience Initiative, Eric was able to secure storage space and stock it with needed hurricane supplies. UUJF provided funding for boots and waders, so residents could avoid contact with the floodwaters. Eric Bason is leading the community’s efforts to secure funding for infrastructure improvements to reduce flooding. Shorecrest has received a one-way valve that has reduced, but not eliminated, street flooding.

Sugar cane burning releases approximately 241kg of carbon dioxide into the atmosphere per ton of sugar produced, fueling climate change. The most important reduction in greenhouse gas emissions from sugarcane areas could be achieved by switching to a green harvest system. That is harvesting the cane residue instead of burning. Kina Green-Phillips is leading a public effort in South Bay, Florida to compel the sugar companies to switch to a green harvest system. In other areas, the green harvest system has created jobs associated with manufacturing of paper, cardboard, and bio-plastics and other byproducts from the parts of the plants that would otherwise have been burned. Kina Green-Phillips is fighting for her children and others in South Bay who suffer from respiratory illnesses and cancer resulting from the cane burning. Kina Green-Phillips is working with the Sierra Club Stop the Sugar Burning Campaign.

Climate change is fueling more intense hurricanes, with tremendous implications for Dunbar, Fort Myers, which had an arsenic sludge dumpsite in the midst of flooding and hurricane strength winds. Hurricane Irma was a record setting hurricane before it hit the State of Florida. The hurricane exceeded the Saffir-Simpson Hurricane Wind Scale (scale based on a hurricane’s sustained wind speed) with top sustained winds surpassing 150mph. Southwest Florida experienced four-to-five feet of storm surge. The Florida Department of Environmental Health sent an inspector to the arsenic sludge dumpsite as the hurricane approached to assure that the site was secured for the storm. Fears of toxins spreading in floodwaters combined with the fear of hurricane force winds that damaged hundreds of homes in Dunbar some of which still have tarps on their roofs from the hurricane. Crystal has founded the Community Forum Foundation, Inc., specifically to support children and families in underserved areas. Her efforts are currently directed to creating a Youth Resilience Corps trained to serve in volunteer capacities after a hurricane and to providing community forums to educate her community. The Community Forum fosters communication among the school system, police, and parents.

Climate change is causing warmer ocean temperatures that are fueling more intense hurricanes like the near CAT 5 Hurricane Michael that created 19 feet of storm surge and decimated large swaths of the Florida Panhandle. Instead of water temperatures being near 80 degrees, they were in the mid-80s as Michael moved over the Gulf and approached the Florida coast. Scarcity of housing, jobs, and resources has exacerbated existing tensions and inequities that have been the subject of Janice Lucas’s work in Panama City for decades. It has also brought unlikely collaborators together to address the enormous challenges the region faces. Janice’s careful work on reducing violence and providing education and after school enrichment for Panama City Youth has a new dimension after Hurricane Michael. Janice Lucas is the founder of the LEAD Coalition, the partners of which include Gulf Coast State College, Bay District Schools, Bay County Sheriff’s Office, and the Panama City Police Department. Janice serves on the Executive Boards of United Way of Bay County and the Long Term Disaster Resilience Organization of Bay County.

What is to be done

The recaps above were synthesized from presentations made throughout the two-day assembly. These syntheses are provided to lift up the conditions of communities throughout Florida and to identify the work that is being done with the goal of finding ways to support the work. That is the call we heard throughout the Assembly. Crystal Johnson, “Are you going to come stand with us? Children are dying…We need help. We’re all in this together…I need you to feel that.” We can stand with Crystal and others by working in our local communities and beyond to ensure that the voice of those who are on the frontline of the impacts of climate change are heard and that mitigation efforts are provided equitably.

We are working in FL-iCAN to identify State and federal policy areas and fostering local support. The FL-iCAN Affiliate, the Unitarian Universalist Justice Florida, continues to provide focused action alerts for Florida climate issues, which includes notifications of events, conferences and workshops of statewide or local interest. Concerned members of the public are invited to join in to bring the voice of our shared values to our elected officials. The time has never been more urgent to bring civility, understanding and a moral voice to discussions with each other and with our legislators. Sign up to receive these action alerts here>  When you provide your full ZIP + 4 zip code, you will receive specific action alerts for legislation being addressed by your State Representative or State Senator.