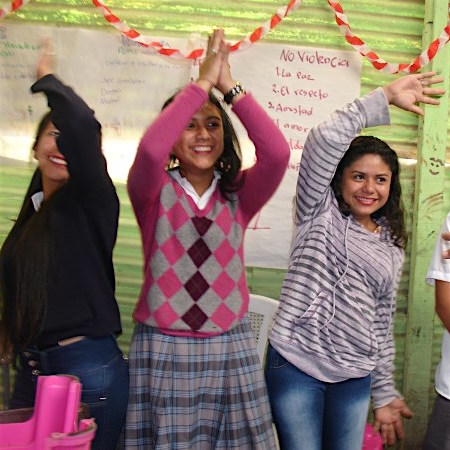 Mónica Maher, Coordinator, for Peacebuilding en las Américas (PLA), sends us this update. PLA is an Initiative of Friends Peace Teams that brings Alternative to Violence Project and trauma healing workshops and other peacemaking support to vulnerable communities in Colombia, El Salvador, Honduras, Guatemala, and Ecuador.

Peacebuilding work of our counterparts in the region remains strong and is reaching new populations, despite budget tightening and organizational readjustments.

With the retirement of National Coordinator, Gladys Cedeño, collaboration continues with coordinators of the Antioquia and Occident Regions as well as with the Franciscan Sisters, who are active throughout the country.   The focus is on AVP work with war survivors in former Red Zones of conflict, where levels of domestic and social violence remain very high.   In particular, Colombian counterparts are reaching out to youth and their parents in the most economically marginalized areas, plagued by gangs and criminal networks. Franciscan Sisters Patricia Duque and Aurora Duque will be in Connecticut in May, and PLA has invited them to come speak to at the Face to Face. 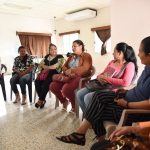 PLA Counterpart, Nelly Delcid of Mercy Dream Weavers in San Pedro Sula, participated in an international gathering of 53 non-violent activists in Quito, Ecuador April 7-14 at the Latin American Faculty of Social Sciences (FLACSO).   Leaders of the gathering were impressed with her seasoned wisdom. During a role-play of a political march, for example, she taught others how to respond with calm when confronted by armed forces.

The AVP Facilitator community in La Ceiba has decided not to offer workshops in the prison until veteran volunteer and AVP Facilitator, Coni Lustenberger, is granted re-entry. In the meantime, they will continue AVP workshops with the police in La Ceiba. 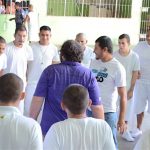 AVP at a prison in El Salvador. photo: friendspeaceteams.org

Salomón Medina, National Coordinator, happily reports that the first AVP Advanced was held in the overcrowded Apanteos Prison in Santa Ana on April 3-4 for 32 men. Responses of the men included:

“For me, I tell you from my heart, this has really helped me because my mind was very closed because they killed my brother and I have been in a state of darkness.   These two days I have felt my mind open. I thank God and ask for the strength to continue….”

“I like the whispered affirmations since they made me remember my mother and her advice and the tender, beautiful things she would tell me. This workshop is the best thing I have experienced in this prison.”

“There are things that are unexpected…. (when) we spoke to each other with very nice phrases, for all that I tried, I could not hold back the tears. I express my sincere gratitude to the AVP Team and thank every participant.”

AVP Advanced and Trauma Healing Workshops were held March 1-3 and 30-31 in Zacamil, a gang-controlled neighborhood of San Salvador. Eight participants, including six women, completed the trauma healing. The Facilitator Training Workshop is being held May 4-5.   (See a video testimony here>) 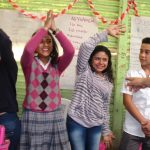 National Coordinator, Lorena Escobar, co-facilitated a Basic Workshop April 12-13 for staff of the New Life Secondary School of the Dominican Missionary Sisters of Rosario in an underserved neighborhood of Guatemala City, part of the Peace Schools initiative. Of the 16 participants, 15 were women. In collaboration with the Mercy Sisters, Lorena also co-facilitated a Basic Workshop for 27 women on February 6-7 in Guatemala City. And, on March 20 and April 25, she offered an Advanced Workshop for 12 members of a women´s group of a gang-controlled high conflict zone in Amatitlán.   Out of this work with women, Lorena asserts:

“Family violence is a silent enemy that many women live daily in their homes, violence that is emotional, economic, sexual, physical, domestic and whose consequences are responsible for causing grave lesions…. feelings of guilt, loneliness, fear, resentment, passivity, lack of motivation, frustration and happiness arise in women. When these women receive AVP workshops (it is not easy for them), a process begins in their minds and hearts, a seed of transformation emerges… and as if by art of magic, a part of the AVP philosophy becomes real: It is not therapy but it can heal.”

Lorena also offered two Mini-Workshops for maintenance and security staff of San Juan de Dios General Hospital in Guatemala City, on March 8 and April 5, with 11 and 13 participants respectively. Finally, she completed an Advanced Workshop on March 27 with 48 members of the National Civil Police, including 21 women, and began a Basic Workshop for 40 police officers on April 24. 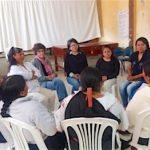 The Regional Foundation of Consultation on Human Rights (INREDH) will offer the AVP Facilitator Training in May at Jambi Mascari, a Kichwa indigenous women´s organization in Cotacachi in the Andean Highlands. The workshop was postponed from March due to illness of leaders. The bilingual Kichwa-Spanish women are eager to bring the workshops to their villages to address domestic and community violence. They are working with the municipality on strategies to avoid deaths at the biggest indigenous celebration of the year, Inti Raymi, in June.

A Whatsapp group was created for regional networking after the First PLA Regional Face-to-Face Gathering in San Pedro Sula, Honduras in January. It has been an active chat group, connecting Friends in the United States with our partners in five countries.   National representatives for PLA from El Salvador (Salomon Medina), Guatemala (Lorena Escobar), and Honduras (Ondina Murillo) continue to meet with the PLA Initiative Coordinator via zoom, a practice they affirm is an important source of support.