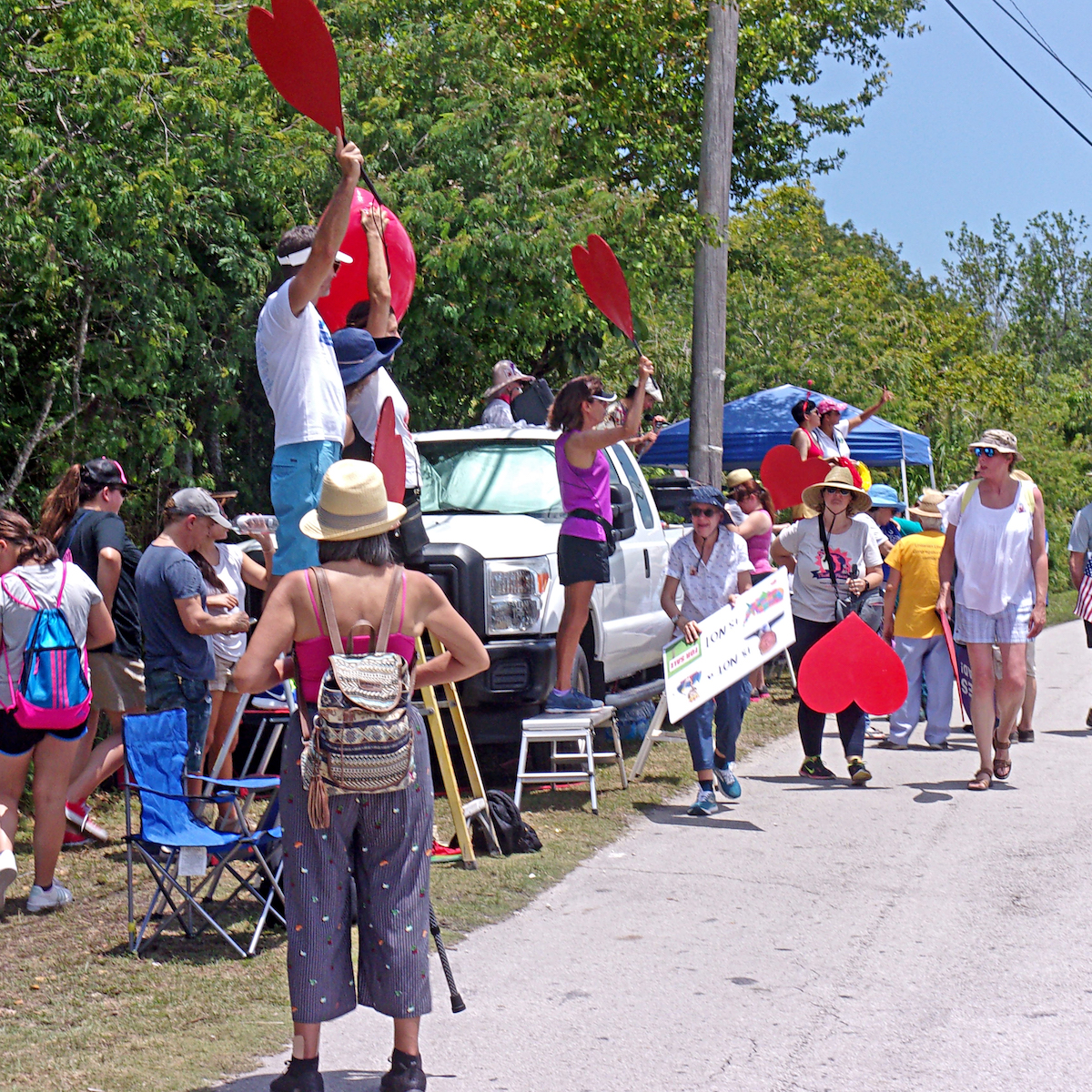 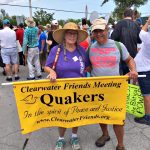 Thirteen Friends joined the Mother’s Day protest to end child detention at the Homestead Child Detention Center in Homestead, Florida, a privately owned facility that is housing over 2,000 immigrant children. 5 Quakers from Deland, 5 from Miami, 2 from Clearwater, and one from Key Largo/Cape Cod were among the 400 peaceful protesters gathered outside the facility, calling for the center to be shut down and the children to be released to their families. The Homestead facility, called a “temporary” shelter, houses children age 13-17. It is the largest detention facility for minors in the US, and has plans to expand to hold 3,200. (see sources/read more below) 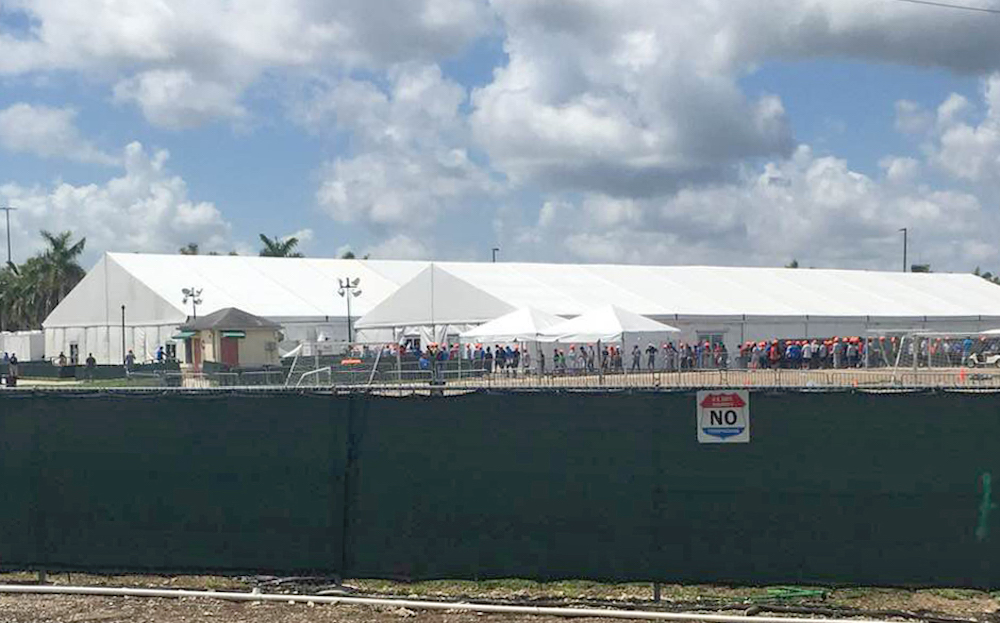 “We were able to see the children over the fence if we stood on the other side of the border road on ladders. The children waved to us and knew we were telling them they are not alone. This area is open to the public, and people have been at the border road daily since the children arrived to tell them that some of us do not believe that children should be imprisoned for being born in the wrong county. We believe that children should be with their families.

“The children are being housed in tents. On Sunday the temperature was in the mid 90’s. It is quite probable that those tents would not withstand a hurricane. We, the taxpayers, are paying privately run prisons $763 per child per day to 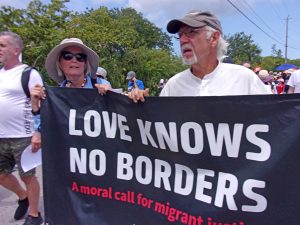 keep them in these facilities. We are housing at least 2000 children at Homestead every day, so the daily bill for this facility alone is over 1.5 million dollars. When the children reach 17, they are sent to a different, more secretive area to await deportation. On their 18th birthday, they are either sent to an adult prison or deported with no family, friends, or resources. 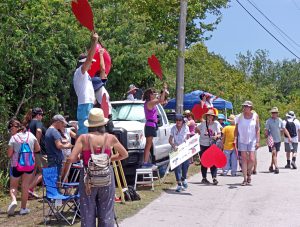 Protesters stand on ladders to show signs to kids inside. photo: Beeg Camarota

2019, was, “We recently visited the shelter in Homestead and found a large scale, highly regimented facility that does not prioritize the well-being of children in their care. We believe it should be closed as soon as feasible.”

“If anyone is interested in visiting the facility, the area across the border road is open to public access. The public can view the children being shuttled between tents on any day. Due to the fence, you will need to bring a short step ladder to see the children The children welcome seeing visitors, waving at us. Please bring large signs to show them they are not forgotten.” 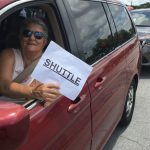 For more information and action, see: 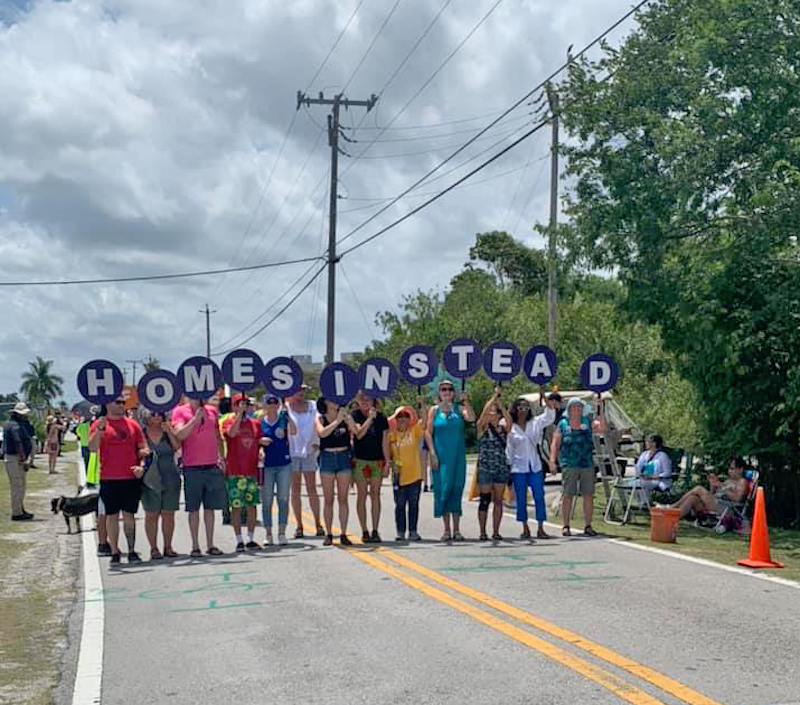