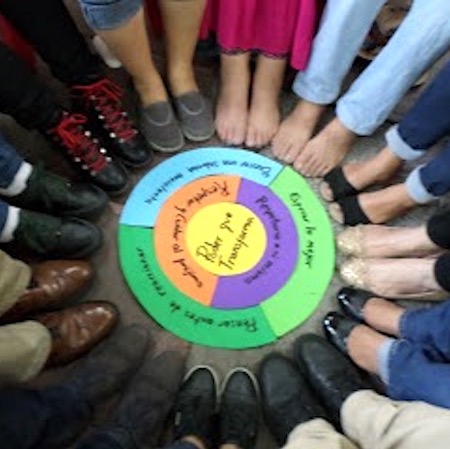 Mónica Maher, Coordinator for Peacebuilding en las Américas (PLA), an initiative of Friends Peace Teams, sends us this report on the PLA’s work in May and June 2019.

Franciscan Sisters Patricia Duque and Aurora Duque spoke movingly about their work and their deep appreciation to Friends on May 17 at the FPT Face to Face Gathering in Westtown, Pennsylvania. They are eager to bring Alternatives to Violence Project (AVP) workshops to the adolescent children of ex-combatants in the economically marginalized areas of Colombia plagued by gangs and criminal networks. Collaborating with other facilitators, they will offer seven workshops in six months in three departments (Antioquia, Tolima and Córdoba). They believe strongly in AVP as an effective grass-roots tool to build a culture of peace during this post-peace-accord stage marked by governmental resistance to the accords and still active guerilla groups.

Within this politically fraught context, the Colombia Truth Commission has begun working to interview victims, gather extensive data and solicit recommendations with a mandate on historical clarification toward non-repetition and peaceful co-existence. This includes reaching out to Colombian exiles around the world, including Ecuador, where Mónica Maher has been trained as a Commission volunteer for refugee interviews. 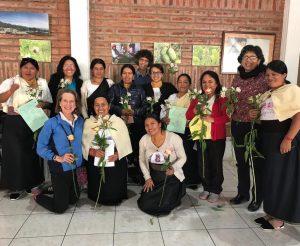 Ten Kichwa women leaders of Jambi Mascari took the Trauma Healing workshop July 4-6 in Cotacachi, offered by Aymara facilitator Carmen Rosa Ccallomamani, Beatriz Villareal of the Regional Foundation of Consultation on Human Rights (INREDH) and Mónica Maher. Carmen Rosa, a Mercy Sister, traveled from Lake Titicaca, Puno, Peru to co-facilitate. The Kichwa leaders were delighted to get to know her in the very joyous and productive interchange of indigenous women of the AVP Andean community, held as the biggest indigenous festival of the year, Inti Raymi, ended without violent incident. The main objective of the Kichwa women is adapting the workshops for illiterate, indigenous rural women in their area.

Salomón Medina, National Coordinator, co-facilitated the second and third AVP Advanced workshops in the overcrowded Apanteos Men´s Prison in Santa Ana on May 15-16 and 22-23. A total of 66 men participated.   Participants commented:

I learned a lot of values that I had forgotten but that I have now recovered… I loved the program…since for me it has been very meaningful to find myself again, find that little well-behaved boy whom my parents wanted me to be.

In my life I really thought that I was alone, but I realized through this program that I am not. Thank you for allowing me this space where… God sent five angels who made me know that I am not alone. 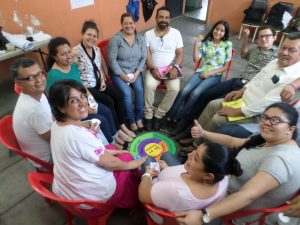 AVP Facilitator Training was held for ten participants on May 3-5 in Zacamil (photo below), a gang-controlled neighborhood of San Salvador. One participant declared:

I learned to leave my comfort zone and hope for the best… many of my doubts were clarified. This workshop has meant being able to take another big step toward achieving peace, beginning with me.

National Coordinator, Lorena Escobar, co-facilitated an Advanced Workshop June 24-25 for eleven teaching staff of the New Life Secondary School of the Dominican Missionary Sisters of Rosario in an underserved neighborhood of Guatemala City, part of the Peace Schools initiative.   As part of the same initiative, she also co-facilitated an Advanced for 35 students and teachers in gang-controlled Pedragal, Amatitlán.   The students chose to focus on anger and forgiveness in what was a very emotional workshop. Some shared:

All of the activities were wonderful, incredible, because in each exercise, I began to feel that I was someone special in life, that the ugly things that people say about me are not true. I let go a lot of what I felt in my heart. I felt free, and for the first time, happy. I had the opportunity to have my father in front of me (in a role play), to speak to him and feel his tender care, telling me that he loved me, that I was everything for him, that he really loved me.

I learned to heal my heart, to forgive.   This workshop helped me to be able to express my feelings because I am really afraid to do so, but, today, I could do it. I learned that I have to work more with others in a team… and that we are very valuable.

We lived together, ate together, laughed together and cried together. I felt that the Transforming Power, which the facilitators talked about, began to emerge within me. I can say that I began to be a special person, different.

Lorena offered an AVP mini-workshop for maintenance and security staff of San Juan de Dios General Hospital in Guatemala City on June 10 with 8 participants. She completed an Advanced workshop on May 9 with 12 women of gang-controlled area San Jorge, Amatitlán, and a Basic May 29 and June 26 with 40 members of the National Civil Police. Finally, she offered a Basic for 10 youth in Chimaltenango May 24-25. 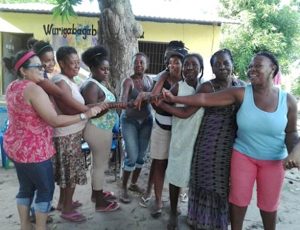 Nelly and Ingris Delcid co-facilitated an Advanced workshop with 22 Garifuna women of the Free Butterflies group in Tornabé on the northern coast May 28-29 (photo below). Most participants have family members who have migrated to the US on caravans or with coyotes, due to poverty, crime and racial discrimination. Women said of the workshop:

It helped to heal my heart and my thoughts.

It helped me to strengthen my self-esteem and take responsibility for my own life.

I learned to speak calmly, to love myself and to improve the living environment at home.

I learned to defend my rights and to express what I feel in my heart.

I learned to let go my embarrassment to speak, and to open my mind and enjoy myself. 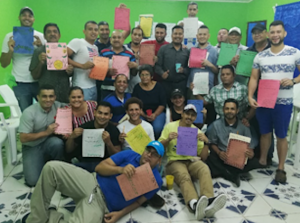 For the first time, an AVP workshop was offered in the Barrio el Inglés Men´s Prison in La Ceiba, a prison for persons charged yet awaiting conviction. Here, 500 men live in a space designed for 300; some share one bed, some sleep on the floor. Ondina Murillo co-facilitated the Basic for twenty-four men June 3-5 (photo below); some commented:

Before I did not like to participate in anything; now I have learned to participate and I see that it is good because I can resolve problems with the help of others… to trust.

Now I know where my anger comes from when I see someone abuse a woman. When I was a boy, my father beat my mother. One time when he was beating her, I got on top of him and hit him. Now I understand why I get so mad about that, but the good thing is I also learned how to calm my triggers.

National representatives from El Salvador, Guatemala and Honduras continue to meet monthly with the PLA Initiative Coordinator to share successes and challenges. They plan to invited an AVP facilitator from Nicaragua to join an upcoming call in order to extend the moral support in this time of political crisis and polarization.