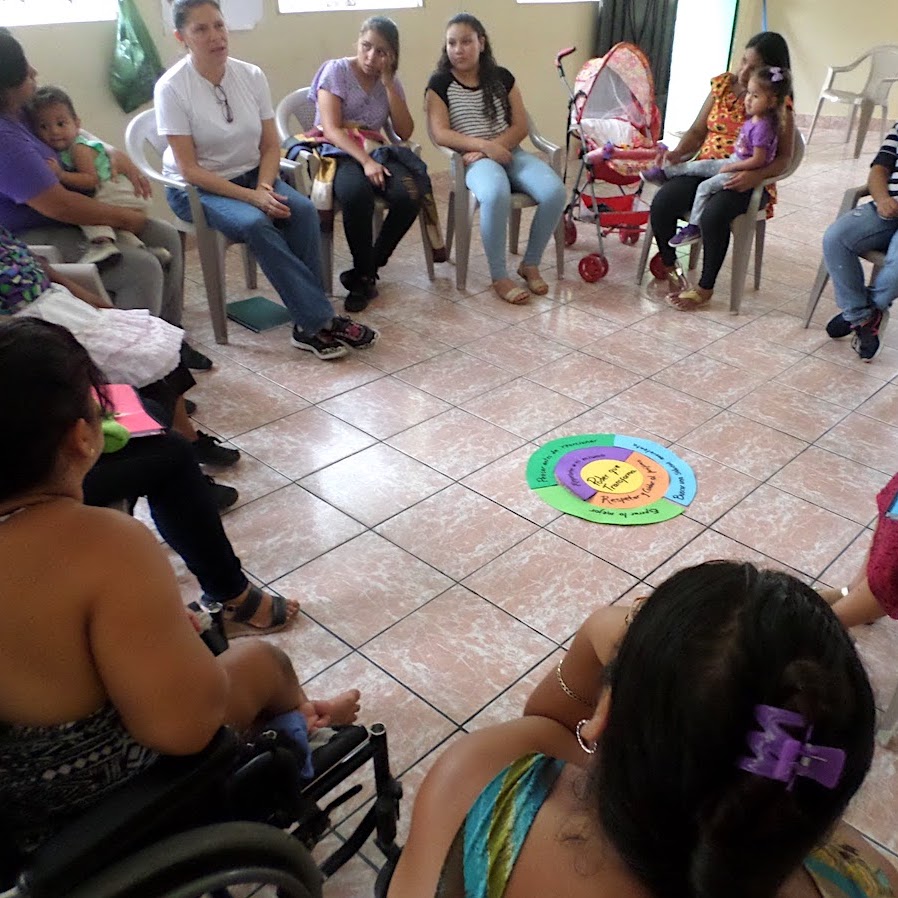 A highlight of this period was visiting Friends in Seattle, Olympia, Corvallis and Portland November 8-13 as part of the PLA Speaking Tour in the Pacific Northwest, organized by PLA Financial Specialist, Andy Cross, who lives in Portland. It was wonderful to be able to share stories from partners in Central America, Colombia and Ecuador about transforming violence in the face of extreme challenges to such receptive and appreciative groups of committed peace activists in the United States.

Franciscan Sister Patricia Duque very successfully continued AVP workshops with adolescent children of ex-combatants in economically marginalized communities plagued by gangs, criminal networks and domestic violence. She co-facilitated an AVP Basic in a public high school in Granada, Antioquia on September 12-13 for a group of 18 students who want to be mediators, an Advanced on October 24-26 for 18 students ages 14-19 in Libano, Tolima, an area ravaged by the war, and the first part of a Basic for 39 third-graders of a private school on November 7 in Palermo. Patricia and colleagues are passionate about promoting AVP to build the next generation of leaders during this critical post-accord period, marked by ongoing assassinations of social activists and deepening political polarization.

In October, widespread strikes against the government’s recent agreement with the International Monetary Fund (IMF) paralyzed the country for ten days, with previously unforeseen police repression and martial law. So much tear gas was fired against protestors that the supply ran out, as the US Embassy tried to secure more from Colombia.   Police also utilized rubber bullets which they aimed directly at the face and head, causing loss of eyes and in one case, death. The overall death toll of protestors was seven, with hundreds more injured and over one thousand arrested. Youth and indigenous people mobilized in mass, taking to the streets around the country and arriving into Quito from distant rural areas of the Andes and the Amazon.

Given the indigenous leadership through this delicate political crossroads, work with our partners is more important than ever. Kichwa women leaders of Jambi Mascari of the Central Committee of Women of the Union of Indigenous Communities of Cotacachi (UNORCAC), are preparing to take the AVP Facilitator Training in early 2020. They will then adapt the workshops for Kichwa-speaking women in outlying rural areas. 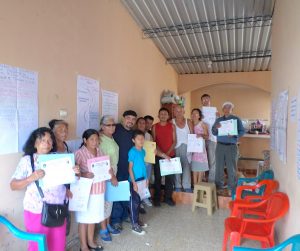 Salomón Medina, National Coordinator, co-facilitated an AVP Advanced Workshop with Co-Madres in San Rafael Cedros, Cuscatlán on September 13-14 .   Five women and two men participated, family survivors of those disappeared or killed during the war. Photos and testimonies available on the Pavel blog>

“I learned to respect myself and I yearn for more of these workshops; I have felt really good and happy whenever you come, and I want to keep learning.”

“I learned a way to show my family that I love them; it has helped to release stress and other things.”

“I learned the meaning of four kinds of forgiveness. I could remember my past sadness and have been able to resolve it.”

“I have learned that it is nicer, more conscious, more interesting to treat the family and to those who surround me well, and in this way, to respond to intra-family violence. This has brought more unity, trust, friendship and communication between us.”

“I have learned how to forgive, which unites me to my brothers, because we had been distant for a long time due to a conflict.”

“I learned how to understand others in order to be able to know how to forgive those who cause harm, and to be forgiven.” 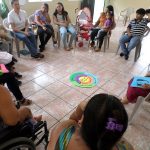 On September 20-22, Salomón offered an AVP Basic Workshop with three women co-facilitators for ten women participants, leaders of the 28th of January Community of Zacamil, a San Salvador neighborhood controlled by one of the biggest gangs in the country. See photos and stories at pavelsalvador.blogspot.com. Testimonies included:

“I learned a lot, new things, to share experiences and have people listen. I appreciate the teaching… very fun! We have liberated ourselves of our problems and stress and forgotten all about (the problems of) our everyday lives.”

“I learned to listen, to dialogue, to expect the best. I liked everything but above all, living together with others. Before I did not ask about anything when a conflict arose, I went directly to the fight, but now I do not do that. Today I first talk; I ask what happened. All this I have learned in this workshop. Thanks AVP!”

“I have learned to value myself even more and be able to share my ideas with others so that they can see the changes in me as a person.”

“It has meant a lot because each afternoon, upon arriving home, I remember what I have lived through in the workshop and I become emotional knowing that I can change and maybe even become a bit of an example for someone else.”

“I learned about patience; I am a person whom God has liberated from everything.”

“I would like to keep learning; I think this is going to help me through my entire life.” 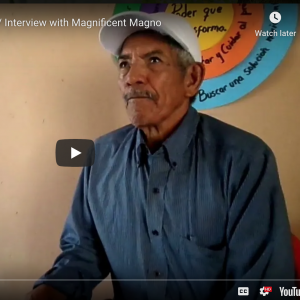 National Coordinator, Lorena Escobar, co-facilitated a Mini AVP workshop on September 10, for nine security and maintenance staff of the St. John of God General Hospital in Guatemala City.   She also offered a Mini workshop to 13 administrative staff on October 9 and eight nursing staff on October 14 in the same hospital.

On September 11-12, Lorena led an AVP Facilitator Training for eight women and two men, and on September 28-29, a Basic for eleven women and four men. Many of the participants in both workshops live in Red Zones plagued by narco-trafficking and gang violence on the outskirts of Guatemala City. Participants asserted:

“I learned that tools exist in order to be non-violent, that we can resolve problems without resorting to violence, that there is a transforming power within us and that we are important and have something special; we can be peace-builders treating our neighbors with respect and dignity.”

“What I learned in this workshop is that I should relate to and work with the group, share ideas.   Also, how important it is to share tools with the family, reflect on Transforming Power, respect others through communication, tolerance, forgiveness, service, appreciation for nature, and non-harming, including non-violent language.”

“This workshop motivated and encouraged me through the exercises and games because they made me forget the problems of my daily life and made me laugh. I will put the exercises into practice in order to achieve a world free of violence…. respect older people and children, giving a good example for peace.”

As part of the Peace Schools initiative, Lorena offered an AVP Basic to 30 students of a technical school in Villa Nueva, one of the most violent neighborhoods or Red Zones of Guatemala City where youth are at high risk of gang recruitment. Students claimed:

“Upon receiving this AVP workshop, I realize that hate and resentment have ruled my life. But, I still have the opportunity to change my life and (affect) the life of those whom I love the most and also, the people who know me since they are not to blame for my suffering. I should accompany others who need it and not be selfish and think only of my pain. I want to be different: happy, positive and trust myself and others… not allow the bad experiences of the past to continue to govern my life. I have a right to be happy and have the ability to help others be happy, to show others that they too can change and be of benefit to our families and our community.”

“I learned that I have rights and can value myself as a woman and a human being, to be strong. I learned to say no to things I do not like, to dedicate more time to myself and my family. With the AVP tools, I can eliminate violence, promote peace and the right to live, to love, to liberty. I learned to give space to others, regardless of their ethnicity, religion or way of being. I learned to approach each person through dialogue, with patience and responsibility, valuing their opinion and respecting their way of thinking and acting.”

Lorena also co-facilitated a Trauma Healing workshop in November 21-23 with Nelly Delcid from Honduras for seven women teachers of the New Life Primary School of the Rosary Dominican Missionary Sisters in a highly conflictive area, Red Zone, of Guatemala City near the central market; the school serves children ages 5-12 whose parents are informal street vendors. Lorena was delighted with the inter-country collaboration, an opportunity to learn directly from Nelly’s seasoned skills with women survivors. The teachers loved the workshop, and all want to become AVP Facilitators. 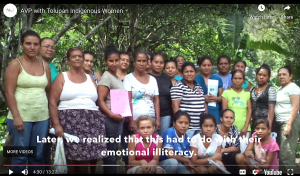 Nelly Delcid facilitated an AVP Trauma Healing workshop on October 24-27 with ten indigenous Tolupán women, defenders of their ancestral territories in Locomapa, Yoro, an underserved rural area dominated by militarized transnational mining. The women live under ongoing threats, and multiple colleagues have been assassinated. The workshop offered a respite from the tremendous daily stress. Participants stated:

“The workshop helped me to be a better person, to be more patient, to value and appreciate myself as I am. I could express myself and felt free.”

“It helped me to be happy, be more patient and loving to the people who surround me.”

“It helped me to change my way of living, to be loving with others.”

“It helped me in my ability to manage my emotions, to say what I think without shame.”

“The workshop helped me not to be angry, to clean my interior self and be able to express myself.”

“It helped me to change many things in my life. I am not the same person as before.”

In the Barrio el Inglés Prison in La Ceiba, an overcrowded facility of 500 men awaiting conviction, the first series of AVP workshops successfully ended when nine men finished the Facilitator Training on October 4. A ceremony on October 25 recognized the 22 men who had participated in at least one workshop. The prison doctor, lawyer, social worker, secretary and psychologist were all involved in the closing event, along with the Director of the Mennonite Peace and Justice Project, PLA’s counterpart. Ondina Murillo, who coordinated the effort, expressed delight that the nine new facilitators are very eager to bring AVP to more men in the prison.

Sister Patricia Duque of Colombia and Harold Urbina of Nicaragua have joined the monthly calls with national representatives from El Salvador, Guatemala and Honduras. So, the meetings now connect us across six countries. There is unanimous consensus to work toward holding another Regional Face-to-Face Gathering in 2020; Sister Patricia will organize it near Medellin, Colombia. We are hoping to include a 5-day training for AVP facilitators offered by Nadine and the AWP Initiative Coordinator, Kins of the Philippines. Finally, in January 2020, I will visit the AGLI Initiative Coordinator, David Bucura, in Rwanda in order to learn first hand about FPT work in Africa.