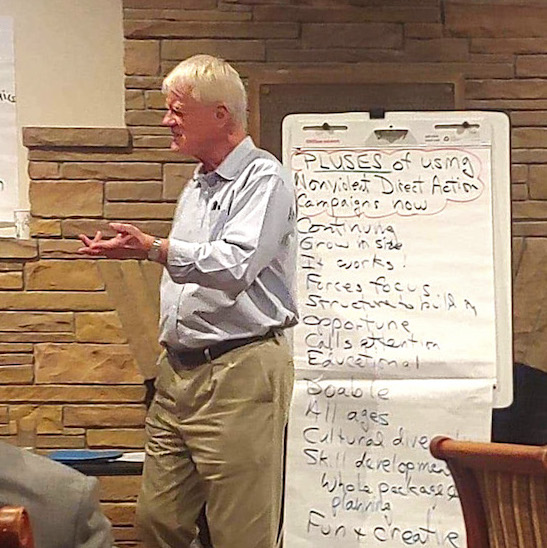 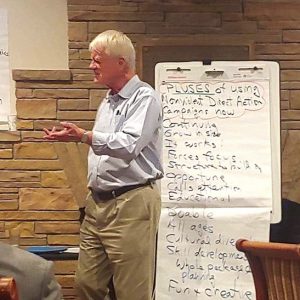 George Lakey, long-time activist and author, visited four Meetings in Florida, giving workshops based on his latest book, How We Win: A Guide To Nonviolent Direct Action Campaigning. The 3-1/2 hour interactive, intense workshop walked Friends through the process of planning a sustained, successful nonviolent campaign to effect social change. Participants learned how to focus in on specific change they wanted to see and develop a plan to make it happen.

Drawing on his decades of activism going back to the civil rights movement, as well as his study of history and background in social science, Lakey talked about the role non-violent movements have played in effecting social change. He referenced data from a landmark study which shows that nonviolent movements are twice as effective as violent ones in bringing about revolutionary shifts in a society. He pointed out that the extreme polarization in our culture is a threshold condition for social change; and, when that polarization is paired with the huge economic disparity such as we see in the U.S., conditions are ripe for a massive social and cultural shift. Whether the coming upheaval will usher in more social justice, or move our society in the opposite direction towards more authoritarian solutions, is the question. Our role is to nudge our culture in the direction of social justice. 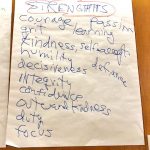 In the first workshop exercise, the group broke into pairs to identify their strengths, sharing stories with each other about difficult challenges they faced—- and how their strongest gifts and skills got them through. The group then came back together to identify and list the collective strengths in the group, and then discussed how they could be used in a nonviolent action campaign.

For another exercise, Lakey laid out the elements of successful nonviolent campaigns—which are sustained and focused actions—and how they are different from other kinds of protests.

Then Friends broke into small groups to go through the basic steps of creating an effective direct action campaign:

Lakey emphasized that using group decision-making where all participants are equal, such as that practiced by Quakers, is essential in building and maintaining unity while the group is engaged in a sustained campaign—when people start getting arrested, and when things don’t go as planned, group unity is critical. With stories from his personal experience, he also illustrated how finding common ground between different groups is needed to build a ‘movement of movements’ necessary to achieve the society-wide change we want to see.

Lakey also spoke about the importance of the spiritual nature of our work. People feel more connected working together in doing actions (such as having meeting for worship in a bank lobby, as SEYM Friends did.) He also stressed how important it is to research an issue before taking action; and that acquiring sufficient expertise on an issue could take several years, in some cases.

Friends who participated in the workshop sent in their comments and reactions: 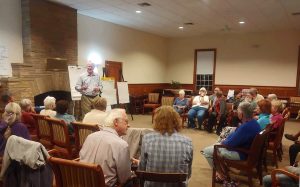 In St. Petersburg, about 40 people from Tampa, Clearwater, and St. Petersburg Meetings attended the workshop on November 19th, held at the St. Petersburg meetinghouse. Bill Carlie, SEYM Clerk, commented that Lakey is a “lively and engaging speaker,” adding “most people left feeling hopeful.”

“SEYM Friends were especially interested in Lakey’s approach since they had seen it in action with SEYM youth who worked with EQAT to stop PNC banks from investing in mountain top removal. Lakey used that work to explain how a goal/demand could be achieved with varying strategies such as education for participants by visiting mountain top removal sites, practicing skills by role playing sit-ins and talking to police and bank personnel to name a few.

“Perhaps one of the key takeaways was that campaigns are a ‘we/group’ activity and although someone might have a leading, working together is the best way for change and people get opportunities to stretch their skills and overcome fear and feelings of helplessness.” 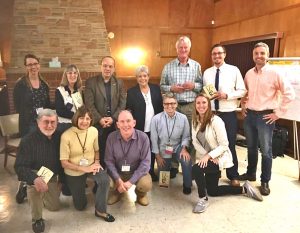 “Many people stated feeling more hopeful and optimistic about making changes for the future by applying what we learned. In the small group breakouts we discussed how we could use non-violent direct action campaigning for some of our current OMM concerns like ending gun violence, abolishing nuclear weapons, implementing conversion therapy protections for minors, and reducing the use of involuntary hospitalizations in youth mental health care. The non-Quaker community members who attended were inspired by the workshop, with two people requesting to stay in touch to work together on shared concerns.”

Orlando member Steven Riddle wrote a poem about the workshop, which he gave permission to share with others. Scroll down to the end of this post. 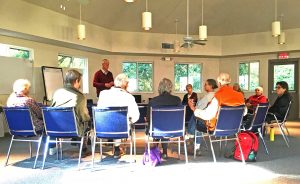 How We Win workshop at Gainesville Meeting.

In Gainesville, there were 17 participants in total, 7 Gainesville Quakers and 10 community members (including 2 or 3 from Indivisible Gainesville, who co-sponsored the workshop.) Gail Stallings (who worked with the Gainesville Meeting Ad Hoc Committee for George Lakey’s Book Tour) writes,

“Participants were enthusiastic, energized and very appreciative of the opportunity to participate in the workshop. Closing comments included: thoughtful, inspired, focus, insight, hope, and grateful. A group of Friends have begun looking into applying what we have learned to address situations that have an adverse effect on Florida’s ecosystem and inhabitants. 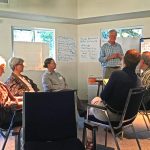 “It was invigorating to be organizing a workshop along side of other SEYM Meetings. A number of Friends and others, including some who were unable to attend the workshop, enjoyed sharing a meal, talking with George, and learning a lot about Viking Economics at our potluck dinner for him on Friday night.”

In Tallahassee, about 25 Friends and 5 community members attended the workshop on November 24th. Susan Taylor, Clerk of the Worship, Ministry and Oversight Committee of Tallahassee Friends Meeting, sends us this report:

10 Tallahassee Friends attended the Saturday evening (11/23) book signing held at St. Paul’s United Methodist Church. A representative from Midtown Reader, a local independently owned bookstore brought copies of both Viking Economics and How We Win. It was an inspiring and intimate evening, much of which was spent with George explaining how Viking economics successfully worked in prioritizing human needs at the government level. We were disappointed that more people did not come, but it was a special time for those of us who did.

For the workshop on Sunday, 11/24, there were about 30 in attendance, 4 or 5 of whom were from the community. One of the community members was a young adult from the Tallahassee Community Action Committee and another, from Moms Demand Action for Gun Safety. The major organizer for our event is a meeting member who also is very active with the latter group.

The workshop was preceded by a simple, delicious, vegetarian buffet lunch, prepared by a sub-committee of three Friends. Right from the start, George facilitated active involvement of participants. Areas for action our small groups explored included keeping Nestle’s water bottling away from our springs, plugging the loophole for background checks at gun shows, abolishing ICE, and working to implement lead removal from water in Tallahassee.

Everyone in the closing circle expressed their pleasure at having attended the workshop: ” Inspired, energized, more knowledgeable, open, hopeful and energized” were some of the words used. There were smiles on faces and lots of chatter afterwards. We were disappointed that more people from the community did not come, even though we had widely publicized the workshop. In general, we were very grateful for George’s nimble mentorship from his vast experience, and that he engagingly, affirmingly, expertly and with good humor introduced us to an effective system of nonviolent direct action. It was exciting that three teens, one from the community, attended part of the workshop, before leaving for another commitment. They said they found it “interesting” and fully participated while they were there. The workshop was an introduction to nonviolent direct action for most of the people in attendance, so it was a time for planting seeds and helping with way forward for those who have the vision of acting on their project.

For Monday, 11/25, a meeting member and FSU faculty member, had arranged for George to speak at a luncheon of the United Faculty of Florida – FSU Chapter. It was attended by 20 or more faculty members. Another faculty member and meeting member enthused that the event was a great success- “a seminar, really.” He commented on George’s warmth, the rigorousness of the content, and his skill in presenting, noting what a fine person he is. He appreciated that George asked for the opinions of attendees about his ideas. An exciting bonus: the group had approved beforehand, unasked for by George, a $1,000.00 honorarium for him. 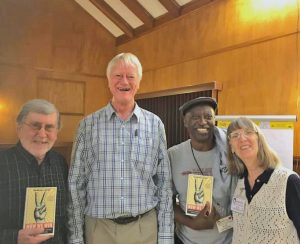 George with some enthusiastic Orlando Friends

Lakey’s Radio Show appearance: George Lakey also appeared on a call-in show on WMNF radio, “Radioactivity,” where he talked about his work with the civil rights movement; being part of a Quaker group who took medical supplies to North and South Vietnam in sailboats; and the role of non-violence in effecting change. You can listen to the show here>

Friends offer heartfelt thanks to Gainesville Meeting, and their Ad Hoc Committee for George Lakey’s Gainesville Book Tour, for their leadership and hard work in making this all possible!

Plan ahead to attend the SEYM Peace & Social Concerns committee  workshop at the SEYM Gathering on “How We Win: Where Do We Go From Here?” All are welcome to join us as we discuss what we learned from George Lakey’s book and workshops. What are the takeaways for us? Where and what do we want to do with what we learned?

On Seeing the Famous Quaker

At first I thought, are there any?

In America, at least, other than

Benjamin Franklin who was more

Franklin than Quaker, oh and that

guy in the hat on the oats box?

But there he was, looking nothing

right there and talking to me about

how to wage peace and transform

the world without raising a fist

much less a gun or worse and he

should know, having done it

for at least sixty years. And here

he was fathering new and avid

children, a Zeus giving rise to

twenty or so Athenas of various

age. How blessed to be there and

see the light coming into faces,

the dawn of possibility as we recognized

together that polarization gives

heats society to a changing point–

that the opportunity is there, should

we choose to take it, to move us from

the impossible to the visionary–

to peaceable places of lambs and lions

and people are loved as people–

all, equally, without stint or condition.