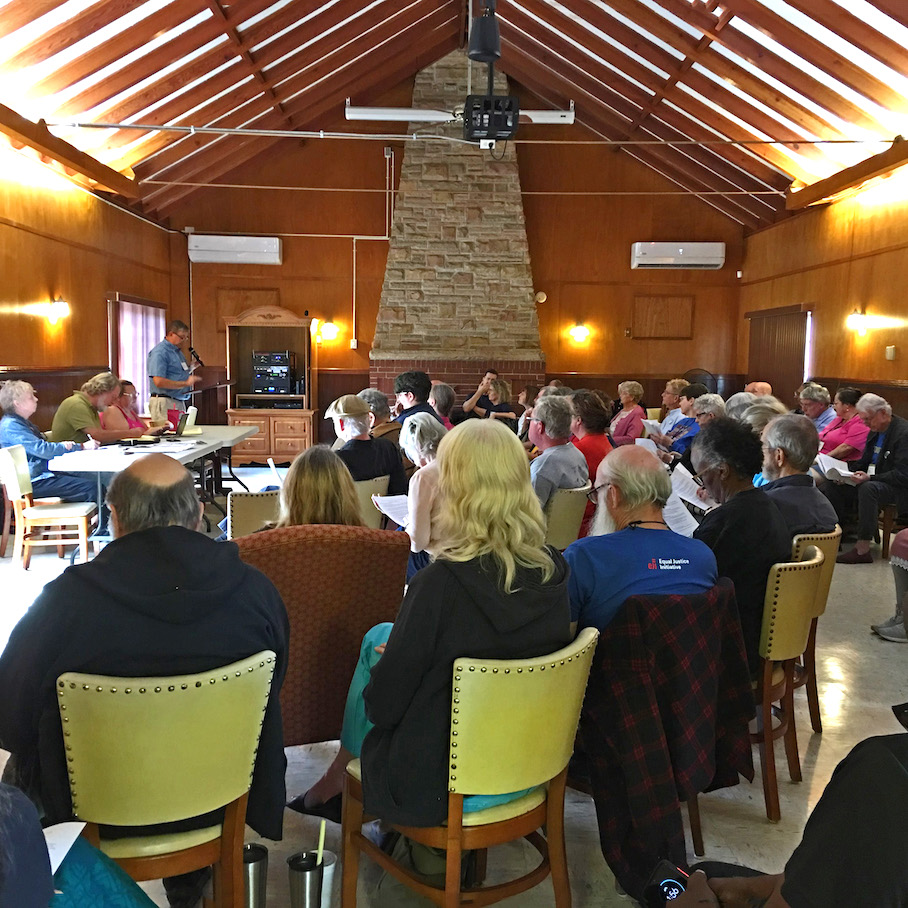 Winter Interim Business Meeting, held on Saturday, Jan. 18th, and the Michener Lecture and Seminars, held on Sunday, January 19th, made for a lively and rewarding weekend that drew record crowds. The events were hosted by Orlando Meeting, who provided welcoming hospitality, technical support, and great breakfasts and lunches.

Youth had a great time over the weekend, too. As  adults participated in the business meetings, Michener lecture, and other activities of the weekend, SEYM youth enjoyed a varied program focused on anti-war movements and activism. Read more>

Over 60 Friends were on hand Saturday, for committee meetings in the morning and Winter Business Meeting in the afternoon. Here are some highlights:

Growing Transgender Allyship in SEYM: The Executive Committee, in its meeting on Friday night, considered our collective need to become more welcoming and sensitive to transgender and gender non-conforming people in SEYM and in our Meeting communities. They recorded these minutes, which were accepted by WIBM on Saturday: 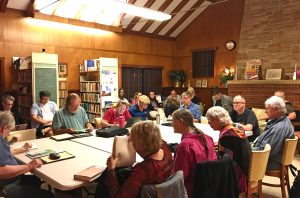 20WEC02. Because we firmly hold our belief that there is that of God in each of us, SEYM Executive Committee calls on Monthly Meetings to become more actively affirming communities for transgender and gender non-conforming people by building relevant knowledge and skills among Friends. Meetings are requested to report back by the Winter Interim Business Meeting 2021.

20WEC03. Executive Committee agrees that the SEYM website will be used as a resource to share educational resources, and will highlight new material in the e-news.

A workshop on ‘Growing Transgender Allyship in SEYM’ will be offered at the SEYM Gathering in April.

SEYM Treasurer, Joel Cook (Treasure Coast) noted that individual contributions are not meeting expectations. Friends are reminded that they can donate to SEYM online.

Half Yearly Meeting clerk Jerry Knutson (Orlando) reported on radical changes for next year. Half Yearly Meeting will adopt a pay-as-led model for registration. Youth will attend for free, and ‘bunkhouse’ lodging will also be free. It is hoped this 4-day gathering, held over Thanksgiving, will draw in more families as well as Friends of all ages.

• The committee will donate some of their funds to support AVP in Nicaragua.

• Grants are available for Meetings and Worship Groups to do peace and social justice projects.  email Cece Yocum for more information.

• Orlando Meeting has been active with the ‘No Way to Treat a Child’ campaign, which is co-sponsored by AFSC. The campaign opposes the detention and abuse of Palestinian children by the Israeli Military. The committee asks SEYM to sign the Faith Leaders Support Letter supporting HR 2407, Promoting Human Rights for Palestinian Children Living Under Israeli Military Occupation Act. WIBM is asking Meetings to consider whether SEYM shall become a signatory, which will be an item of business at Yearly Meeting. 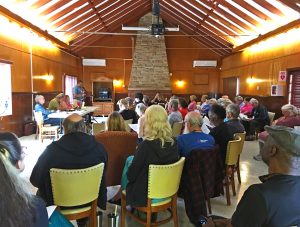 A Friends World Committee for Consultation (FWCC) Regional Gathering will be held in Miami, February 6-9, 2020. All are welcome! Read more and register>

Youth and Young Adult Coordinator Kody Hersh (Orlando) reported on his visits to Meetings, and on the very well attended gatherings held over the summer: a Family Gathering at Lake Louisa, and a Young Adult Retreat held in Sarasota. Kody is available to travel to Meetings to lead workshops on a wide variety of topics to suit your Meeting’s needs, whether or not you have children email Kody Hersh. His written report is in the WIBM Documents In Advance>

Committee for Ministry on Racism clerk Susan Taylor (Tallahassee) started her report with acknowledgment of that we were meeting on the land that had belonged to the Timucuan and the Seminoles. The committee will be presenting a workshop at the SEYM Gathering in April, titled ‘Uncovering Bias With Integrity & Love,’ and continues to gather resources on undoing racism.

Earthcare Committee co-clerk Bill Carlie (St. Petersburg) reported that Friends have been very concerned about the effects that a proposed water bottling facility would have on Ginnie Springs. Bill presented a letter to the Suwannee River Water Management District that urges them to deny the permit for the facility. Friends approved SEYM signing and sending the letter. The letter may also be sent to media outlets. Meetings are welcome to use it for their advocacy efforts. See the letter>

• Florida toll roads: Beverly is very active in advocating against the construction of three new toll road corridors through rural Florida that will impact communities, vulnerable lands and waters, and wildlife – not just from the highways, but also from the sprawl they would generate. Learn more at www.1000friendsofflorida.org.

• The 6th Annual Climate Justice Assembly will be held in Orlando March 13th and 14th. It is sponsored by the Florida Council of Churches, which SEYM belongs to. All are welcome to attend.

• More SEYM Virtual Climate Strikes are being planned, in solidarity with the Fridays for Future movement. Stay tuned!

Friends Peace Teams representative Cece Yocum (Tampa) is enthusiastic about the expansion of the Alternatives to Violence Project (AVP) network into Nicaragua. FPT’s Peacebuilding en las Americas initiative develops and supports networks of AVP trainers and workshop leaders, as well as Trauma healing workshops in 5 Central American countries torn by violence; and now needs $1700 to fund trainers to travel to Nicaragua. Friends can donate here; earmark your gift to Nicaragua. 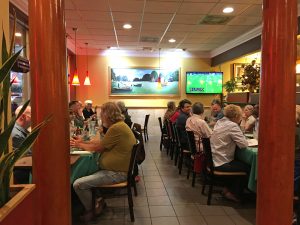 Other reports were presented; the full minutes of the meeting will be posted soon.

After business concluded at 5:30 pm, Friends adjourned to a local Vietnamese restaurant for dinner. 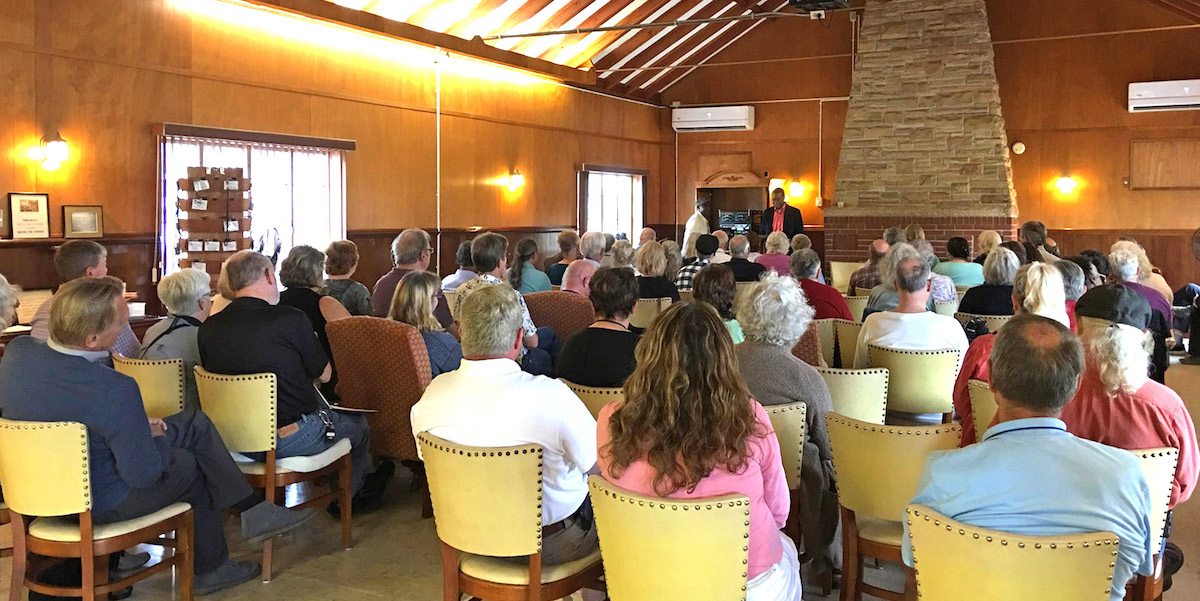 From Fear & Scarcity to Hope & Abundance: Confronting & Transforming the Giant Triplets of Racism, Materialism, and Militarism was the title of the 50th Annual Michener Lecture presented by Brian Corr. He spoke to a crowd of about 80 Friends, who were deeply affected by his message. Brian has spent decades working on peace and justice issues, and has served in various capacities with AFSC, both nationally and in the New England region. He currently serves on the boards of the Police Review & Advisory Board for the City of Cambridge (Exec. Secretary), Cambridge Peace Commission (Exec. Director), ACLU of Massachusetts, the National Association for the Civilian Oversight of Law Enforcement (President).

It is not possible to capture the amazing depth and richness of Brian’s lecture in this space, but these notes may convey some of his message.

The title is a reference to a quote from Martin Luther King Jr.,

“We must rapidly begin the shift from a ‘thing-oriented’ society to a ‘person-oriented’ society. When machines and computers, profit motives and property rights are considered more important than people, the giant triplets of racism, materialism, and militarism are incapable of being conquered.” ― Martin Luther King Jr.

This is as true today as it was in 1967. By using many examples from history and illustrations of our current situation, Brian showed how the triplets of militarism, racism, and materialism have dominated, and continue to dominate, our country. They are interwoven, driving forces that have shaped our political, social, and economic trajectory. We are now in crisis, in a new era of insecurity, inequality, misplaced power, and existential threats to our existence. 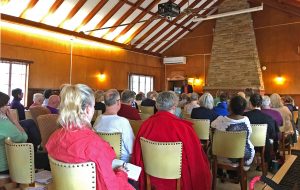 Brian also offered examples of how the politics of fear and scarcity frame our culture and political discourse, even in this country—the richest and most militarized country in the world. For example, it is evident when we talk about issues like healthcare: any change is seen as a threat to what we have, and we are told we cannot afford healthcare for all, even though we spend billions on the military. It is seen in issues like immigration, when the ‘other’ is demonized and dehumanized as being ‘not like us.’ Fear drives the rise in militarism. We live in fear of others, fear of the unknown, of the future, or of being victims of a terrorist attack. Racism, sexism, classism, all the other isms–and collectively, oppression–are all driven and tied together by a mindset of fear and scarcity.

He illustrated how capitalism is not so much a cause of our ills, but a symptom of the giant triplets materialism, racism, and militarism. But being anti-capitalist will not address the roots of injustice. What is needed for real change is a transformative, morally grounded movements for justice. 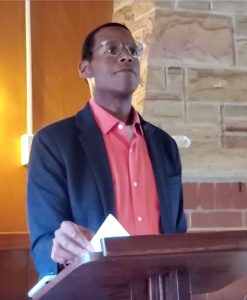 In the last part of his speech, Brian turned to describe how we might go about creating this transformation. He quoted from Martin Luther King Jr.’s 1967 speech, ‘Beyond Vietnam,’ where King described our spiritual and moral crisis and the revolution we need:

“A true revolution of values will lay a hand on the world order and say of war, ‘This way of settling differences is not just…’”

He talked about the obstacles to transformative change. The politics of fear and scarcity, and the triplets of racism, militarism, and materialism, so dominate our culture that it can cripple and subjugate our will and imagination. We may react by becoming radicalized, or we may retreat—into focusing on a single issue, into doing small acts of charity, or even into despair.

If we are to create a ‘true revolution of values,’ we need focus on overturning these triplets and their systems of oppression and injustice. We must acknowledge the humanity of those we seek to change. We must not treat them as the ‘other,’ talk down to them, or engage in ‘power struggles,’ all of which are based on the very ‘domination’ model we are seeking to overturn.

Brian calls on Friends to ground ourselves, and the change we wish to see, in a spiritual and moral way:

“The prophetic and mystical aspects of societal transformation and pacifist liberation can and must frame the project of creating a moral, just, sustainable, and viable global society.”

Brian asks Friends to consider taking up a Quaker testimony of Justice, rather than seeing it only as part of our other testimonies. We must, of necessity, incorporate a search for justice into our lives and our faith if we are to challenge the triplets of racism, militarism, and materialism. We need deeply egalitarian structures that lift up our humanity. We must love unreservedly, love wastefully, and be there for others—for in that moment we become fully human. 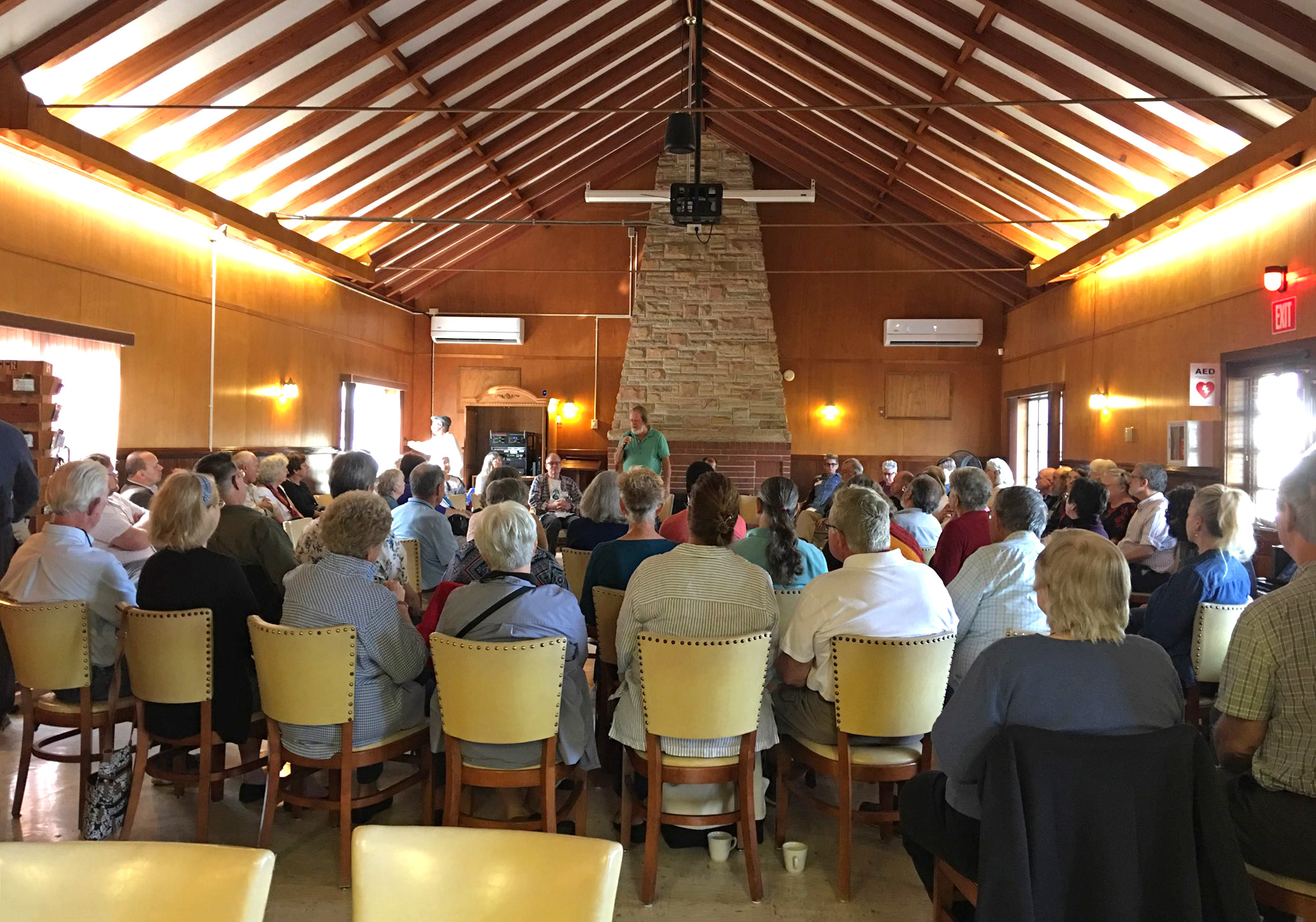